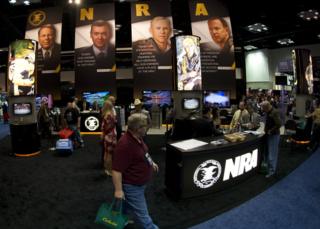 What is the NRA?

NRA stands for National Rifle Association. The group was founded in 1871 by two US Civil War veterans as a recreational group designed to “promote and encourage rifle shooting on a scientific basis”.

The NRA’s path into political lobbying began in 1934 when it started mailing members with information about upcoming firearms bills. The association supported two major gun control acts, the National Firearms Act of 1934 (NFA) and Gun Control Act of 1968 (GCA), but became more politically active following the passage of the GCA in the 1970s.

In 1975, it began attempting to influence policy directly via a newly formed lobbying arm, the Institute for Legislative Action. In 1977 it formed its own Political Action Committee (PAC), to channel funds to legislators.

The NRA is now among the most powerful special interest lobby groups in the US, with a substantial budget to influence members of Congress on gun policy. It is run by executive vice-president Wayne LaPierre.

In August 2020, prosecutors in New York and Washington DC announced that they would seek to dissolve the organisation over allegations that senior leadership misused a charity fund, redirecting the money for lavish personal spending.

How big is its budget?

The NRA spends about $250m per year, far more than all the country’s gun control advocacy groups put together. But the NRA has a much larger membership than any of those groups and disburses funds for things such as gun ranges and educational programmes.

In terms of lobbying, the NRA officially spends about $3m per year to influence gun policy – the recorded amount spent on lobbying in 2014 was $3.3m. That is only the recorded contributions to lawmakers however, and considerable sums are spent elsewhere via PACs and independent expenditures – funds which are difficult to track.

Analysts point out that the NRA also wields considerable indirect influence via its highly politically engaged membership, many of whom will vote one way or another based on this single issue. The NRA publicly grades members of Congress from A to F on their perceived friendliness to gun rights. Those ratings can have a serious effect on poll numbers and even cost pro-gun control candidates a seat.

But since the election of Donald Trump in 2016, NRA spending on campaigns in the states has plummeted. The drop came amid the rise of pro-control groups, who have received millions of dollars from backers who oppose most NRA policies. It was estimated that gun control groups may have outspent the NRA for the first time ever in 2018.

How big is the NRA?

Estimates of the NRA’s membership have varied widely for decades. The association claimed that membership surged to close to five million in response to the mass shooting at Sandy Hook school in 2012, but some analysts put the figure at closer to three million. The organisation has been accused of inflating the figure.

The NRA has boasted some high-profile members over the years, including late former President George HW Bush. He resigned from the group in 1995 after Mr La Pierre referred to federal agents in the wake of a bombing attack on a government building in Oklahoma City as “jack-booted thugs”.

Current members include former vice-presidential candidate Sarah Palin, and actors Tom Selleck and Whoopi Goldberg. The late actor Charlton Heston was president of the NRA between 1998 and 2003. Heston famously held a rifle over his head at an NRA convention following the Columbine High School massacre in 1999 and told gun control advocates they would have to take it “from my cold, dead hands”.

Why is it controversial?

The NRA has lobbied heavily against all forms of gun control and argued aggressively that more guns make the country safer. It relies on, and staunchly defends, a disputed interpretation of the Second Amendment to the US Constitution, which it argues gives US citizens the rights to bear arms without any government oversight.

The association faced criticism from both sides of the political spectrum in the wake of the Sandy Hook shooting, when Mr La Pierre said that the lack of an armed guard at the school was to blame for the tragedy.

It staunchly opposes most local, state and federal legislation that would restrict gun ownership. For example, the NRA has lobbied for guns confiscated by the police to be resold, arguing that destroying the weapons is, in effect, a waste of perfectly good guns.

Likewise, it strongly supports legislation that expand gun rights such as “open-carry” laws, which allow gun owners to carry their weapons, unconcealed, in most public places.