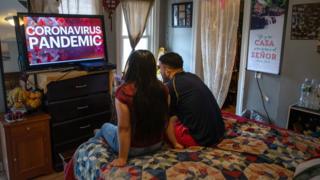 Millions of Americans have been promised stimulus payments of up to $1,200 as part of the federal government’s rescue package. We asked them what they will spend it on.

As grim economic pictures emerge alongside the steep toll of the health crisis, a $2tn government aid package that promises to give money to 150 million Americans has got off the ground.

Of those who qualify, many are expecting to receive $1,200 (£975), but how far that cash will stretch – and the difference it will make to its recipients – is not the same.

Readers of the BBC News website explained what they would do with it.

Many said immediate spending on necessities would account for all or most of their stimulus payment.

“[The] $1,200 will be spent on food, very carefully counting every cent because food is very expensive,” wrote Pearl Quintal, a grandmother from Hawaii.

“I will buy what we need, not spending it all at once. I will save some to make ends meet as far as $1,200 will carry myself and my two grandsons that I have been taking care of.”

Economists expect that spending on basics like food, medicine and housing will be the most common uses of the aid money. That is the intention of the cheques – to “plug holes in people’s balance sheets,” says Stan Veuger of the American Enterprise Institute think tank. But for Americans who have lost jobs and live in high-cost parts of the country, it will not be enough.

Median rental costs per month for a one-bedroom flat in cities like New York, San Francisco and Boston are more than double the $1,200 stimulus amount for an individual, who must make less than $75,000 to qualify for the full cheque.

Despite a crash in demand that usually brings down prices, the cost of US consumer goods spiked in February, while cost has risen for groceries.

“I would buy food and medicine,” said Gerry Adams of Tampa, Florida. “And I would try to pay my car insurance without begging for help.”

“Everything I need, the price has gone up, except for gasoline,” wrote Mr Adams, 52, who requires an oxygen tank to help him breathe. “This is no way to live life,” he said.

For some Americans, a cheque from the government is not a lifeline but a bonus that can be put toward discretionary rather than essential expenses.

Paul Headley, a reader from Annandale, Virginia, told the BBC he would spend his stimulus on a Tabor SAR rifle. The Israeli-made firearm retails at $1,990. Mr Headley and his wife have both received their government cheques.

The nearly $2,000 price tag gave him pause on making the purchase before, Mr Headley said, but “the stimulus cheque is making the out-of-pocket easier to justify”.

Another reader said the crisis has prompted his family to reconsider their washroom habits. After witnessing the panic-buying of toilet paper spurred by the virus, his family decided to use the stimulus money to buy bidets, said Dirk Ducharme of Auburn, California.

“Toilet paper shortages have convinced me that the Japanese and most Europeans had it right all along,” he told the BBC.

For some Americans, a boost in discretionary spending provides a chance to express their values.

“Yesterday I listened to Barack Obama’s message to everyone and his endorsement of Joe Biden,” said a reader in Missouri. “This morning when the stimulus money was received I donated it to Mr Biden’s campaign.”

Several readers said they would donate the money to coronavirus response-related charities, or people they know in direct need of the assistance.

Gloomy predictions about the US economy and fear among even those with jobs that their livelihoods are far from secure is prompting some Americans to vow to save the money from their cheques.

Alison Weaver, a grocery store employee, said she would save her $1,200 because she is worried that being exposed on the job might mean that “I get ill and be unable to work”.

“It would be nice to pay down student loans or fix our leaking foundation,” said Michael Jonagan of St Louis, Missouri. But his family plan to save their cheque because “it feels more important to keep the money set aside for a future that seems more and more uncertain”.

“I’m a public educator and my partner is a municipal employee, so even in the best of times saving is a challenge,” he said. “Hopefully this money lasts until it is needed.”

The stimulus will boost savings for some people, like pensioners on fixed incomes and people lucky enough to have kept their jobs with no loss of money coming in, plus a little extra. Pensioners, especially, have fewer places where they can spend and so more likely to save, predicted Dr Veuger.

“Like with so many things here, those who need assistance the least seem to get it most easily,” reader Adam Stokes observed. Mr Stokes and his wife live in Mundelein, Illinois, and have received $2,400 together, most of which will be saved.

“We’ll each take $100 and use that on hobbies or entertainment – all of our critical needs are more than covered. My graduate school is even offering a $1,500 voucher for a class I was already going to take, so that is effectively another $1,500 back for us.”

This pandemic has done much to highlight the stark class divides in our society, he added. “And I know I am on the considerably more secure side of that divide.”