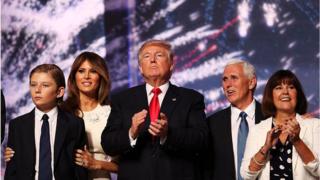 The Republican National Convention is next week and we’re slowly learning more about what it might look like – though some details are still up in the air.

But let’s back up first.

What IS the Republican National Convention?

Party conventions take place once every four years – they are the ceremonial crowning of the party’s presidential candidate as they prepare for the final phase of campaigning.

Last time around, we saw the Trump family take centre stage to a backdrop of fireworks and a sea of red, white and blue balloons.

It’s also where party officials wrap up other less-glamorous business, like unveiling the political platform and adopting rules.

As the sitting president, Trump is the de facto nominee, but it’s not official until the party anoints him at the convention.

This year, that will happen at the end of four days of convention events between 21-24 August.

How will this year’s Republican National Convention work?

Even Republicans have been trying to figure this out – and the format of this year’s convention has seen a number of iterations.

The conventions of years past have been glitzy affairs, bringing together thousands of delegates, party leaders, activists and celebrities for receptions, speeches and general hyping up of the presidential candidate.

But the pandemic has upended all that.

Unlike its Democratic counterpart, the Republican Convention still plans on hosting some in-person business. NPR has reported that people will need to wear masks and social distance. Those attending will also be given a self-swab Covid-19 test before travelling and entering their hotels. Attendees will have temperature checks and will also wear Bluetooth badges that allow for tracking and contact tracing.

Where is the 2020 Republican convention?

It’s in Charlotte, North Carolina – but if you want to hear the backstory, you might want to sit down and make yourself comfortable. There was a bit of a saga.

Republicans first planned to host the convention in Charlotte – a city in a key state that went to Mr Trump in 2016.

Then in June, North Carolina’s governor (a Democrat) threw a wrench in plans by saying the Republican convention would need to follow public health measures like reducing the number of people inside the venue and wearing masks.

Convention planners baulked and started scouting for a new spot, which led them to Jacksonville, Florida: a pro-Trump region in a Republican-led state.

But then the Sunshine State started spiking in Covid-19 cases and the thought of thousands of people at an indoor event over the better part of a week brought the organisers out in a cold sweat.

So it was moved back to Charlotte where the current plan is to have a “business-only”, scaled-down gathering in North Carolina.

OK, so where will Trump be?

Trump first said he would accept the nomination in Charlotte, but later suggested that could happen virtually from the White House, or even on the Gettysburg Battlefield in Pennsylvania, where President Abraham Lincoln famously addressed the nation.

“It won’t be your typical convention,” he told Fox News in late July. “But it’s going to be be very safe and I thought I had an obligation not to have large numbers, massive numbers, crowded into a room.”

As of 17 August, Trump has said he’ll accept the nomination in a “real speech on Thursday”, live from the White House.

This hasn’t been entirely well-received – with critics arguing using federal property for a campaign speech is unethical.

What to watch out for

Four years ago, the Republican National Convention was a bit of a shambles. There was unrest among some delegates, scheduling was sloppy and the programme of speakers had more d-list celebrities than prominent party elders.

Melania Trump was rapped for lifting portions of her speech from Michelle Obama, and her husband’s speech was dark and belligerent.

None of it mattered, of course, as Donald Trump went on to win the White House anyway.

This time around, the Trump team – with years to prepare – had hoped to present a more polished affair. Then Covid-19 scuttled their plans, and they’re flying by the seat of their pants once more.

The campaign’s original strategy was to tout a booming economy and nation at peace. Now, however, the economy is struggling, people are worried about their health and cities across the country have been wracked by mass demonstrations and a reckoning over systemic racism.

At his convention, Trump will try to make the case that, as the man who presided over these turbulent times, he is the one best equipped to see the nation through. That will probably involve tearing his opponent, Joe Biden, down as much as building himself up.

He needs to motivate his base to turn out – something he’s proven adept at – and also try to win back some of the independent voters who broke his way in 2016 but are currently leaning toward the Democrats.

Few incumbent presidents of the modern era have faced such a steep deficit to overcome in the final months of their re-election campaign. Four years ago, Trump defied conventional practices and wisdom to win the presidency. If he is to catch lightning in a bottle once more, this is the week where it has to start.

Who are the speakers this year?

As well as Trump himself, First Lady Melania Trump will speak on Tuesday, followed by Vice-President Mike Pence on Wednesday.

Mr Pence will accept his running mate role from Fort McHenry in Baltimore. It’s a place heavy with historical significance, because it is where US soldiers withstood the might of the British in 1814, inspiring Francis Scott Key to write the poem that became the national anthem.

We can expect addresses from the rest of the Trump family on Monday.

We can also expect this year’s convention to be wholly pro-Trump in tone, unlike 2016 when the political outsider was met with pushback from some party members.

Planners say Trump will be featured on all four days of the convention – but we’ll hear from “everyday” Americans too.

Like its Democratic counterpart, the Republican programme will also be a mix of pre-recorded and live speeches, based in Washington DC.

Each day will follow themes of America as the land of promise, opportunity, heroes and – in a nod to Trump’s slogan – greatness.

It wouldn’t be a political show without a bit of controversy, and some of the additional voices will certainly draw ire from Trump critics.

The St Louis couple who made headlines for brandishing guns at protesters who they said were threatening them will make an appearance; so will a high school student criticised for a viral video with a Native American protester last January, and an anti-abortion activist.

As for who else might take the stage, virtual or otherwise, pundits predict we will see the president’s top defenders, like Congressman Kevin McCarthy – the minority House leader from California – and Ohio Congressman Jim Jordan of Ohio are likely to get air-time, as well as former UN Ambassador Nikki Haley.

How does the voting work?

There’s a roll call when delegates from states and territories across the US say which candidate they are backing. This time, that’s the president.

State delegates vote in line with the results of their state primary results – and in the case of Republicans, they are bound to do so. There are also unpledged delegates who can vote freely – these are two national committee members and the party chairperson from each state.

With Trump as the incumbent, some states opted out of hosting primary elections this year and automatically gave their delegates to him.

If you need a refresher on all things primary and caucus, check out our explainer here.

Now we watch as campaigning heats up before the general election on 3 November.

Be sure to set a reminder for the debates too, where we’ll see Biden and Trump battle to win over voters. The first presidential debate is scheduled for 29 September with two more in October.