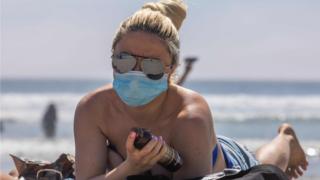 Sun loungers separated by plexiglass. Blood tests and sanitiser spray-downs before flights. These might sound extreme, but they are real measures some in the travel industry are looking at to keep holidaymakers feeling safe and comfortable in a post-lockdown world.

It’s too early to say when international travel might restart again – Argentina, for example, has extended flight bans until September and a UK minister has said he won’t be booking a summer holiday anytime soon.

But what will overseas trips look like when they’re able to be taken again?

Many airports, including in London, have already introduced measures to cater for essential travellers based on government guidelines – so they might sound familiar.

These include between one and two-metre distancing at all times (excluding people who live together), hand sanitisers distributed throughout the airport and efforts to spread passengers more evenly across terminals.

In the US, the Transport Security Administration (TSA) says travellers should wash their hands for 20 seconds – in accordance with official guidelines – before and after the security screening process.

But, at Hong Kong International Airport, testing is under way on a full-body disinfectant device. This, the airport says, can sanitise users within 40 seconds, using sprays that kill bacteria and viruses on skin and clothing.

The airport is also trialling autonomous cleaning robots that move around killing microbes by zapping them with ultraviolet light. Similar robots have been tested in makeshift hospital rooms.

Airports that have electronic check-in kiosks are encouraging passengers to use them where possible to avoid unnecessary interaction.

Most will display posters that explain guidance measures and instructions throughout their buildings.

James Thornton, chief executive of Intrepid travel group, says the process of passing through airports is likely to take longer because of stricter checks.

“Just as taking out liquids and devices before going through machines has become the norm, so too will new social distancing guidelines,” he says, adding: “It’s possible we’ll see the introduction of an immunity passport.”

Earlier this year, several airports announced they were introducing “thermal detection screening” in efforts to prevent the further spread of the virus overseas.

However, the procedure divided experts on its effectiveness, as some people are said to be asymptomatic, and many airports will not be introducing it.

Some have gone further, though, with Emirates offering passengers rapid Covid-19 blood tests prior to boarding at Dubai airport terminals. Emirates says the tests produce results within 10 minutes.

As you take your seat, you’ll have to picture the usual smiles from the flight attendants, who will most likely be wearing masks.

You might choose to smile back, but you’ll probably be wearing one, too – as more and more countries recommend their use.

Your mind, meanwhile, should be at ease in the knowledge that most major airlines will have stepped up their cleaning and sanitation procedures, leaving your tray table, seat rest and safety belt suitably disinfected.

If you’ve booked your flight with Korean Air, don’t be alarmed if people appear in the aisle wearing full personal protective equipment (PPE), as the airline says it plans to issue cabin crew with gowns, gloves and eye masks.

This might be as good a time as any to appreciate that you won’t be sharing either of your armrests, as most airlines have said that flights will not be fully booked and middle seats will be kept empty (at least to begin with).

An airline pilot for Tui, who asked to be named only as Christian, said that while spreading passengers on a plane made sense in respect of distancing guidelines, it could prove “hugely prohibitive” and costly.

Christian says countries that rely heavily on tourism are already contacting operators. “I believe that we will see a small restart of flights to selected destinations towards the end of the season.”

How does an Italian beach holiday sound? Well, you could find yourself weaving between tall sheets of plexiglass used to separate sun loungers as you look for a shady spot in the sand.

“I’ve seen drawings,” says Ulf Sonntag of the Institute for Tourism Research in Northern Europe, “they are seriously considering this as an idea in Italy.”

Mr Sonntag says European destinations are also looking at ways to manage guests at hotels, including only permitting every other hotel to open, or every other room within a building to be occupied.

“If the central aim is social distancing, then they have to work with that. It’s not looking like pools can open at Mediterranean resorts,” he adds.

While restaurants are looking at spreading tables more sparsely, one Portuguese hotel chain, Vila Gale, said it had been “stocking up on hand sanitisers” and “drawing up a la carte menus to replace buffets”.

Nikolaos Sipsas, a professor of medicine in Athens, agrees that buffet meals are a big risk, along with pools, bars and beaches.

“I see Greek beaches being sparsely populated, in other words there will be bathers, but they won’t be close to each other. We will not see the phenomenon of organised beaches with towels right next to each other,” he says.

Other European countries have been discussing “tourist corridors” to connect areas and member states least affected by Covid-19.

Croatia, for example, has already said that it may provide tourists from the Czech Republic and Slovakia with special access to its beaches this summer.

Will this change the future of travel for good?

You might not have enjoyed the sound of that hypothetical overseas holiday. And you’re probably not alone. The fact is, more holidays in future are likely to be taken at home.

“People are likely to be travelling less internationally, what used to be called a staycation will change, and could become the norm,” Andy Rutherford, founder of UK-based tour operator Fresh Eyes, says.

In the wake of the global pandemic, ship cruises, ski holidays and long-haul flights could lose their appeal, especially as the focus returns to green technology and ways to tackle the climate crisis, Mr Rutherford says. “Our commitment to travel must be based on mutual respect, solidarity and responsibility.”

Mr Sonntag agrees the pandemic may result in a change of habits: “Domestic travel might make people realise that you don’t always need to travel so far.”

A recent survey by the International Air Transport Association (IATA) found that 60% of people questioned would wait for two months before booking flights after the coronavirus is contained – 40% said they would wait for at least six months.

Boeing, which has cut 10% of its global workforce in response to Covid-19, has said it does not expect air travel to return to 2019 levels until at least 2023.

IAG, the parent company of British Airways, said it could take “several years”.