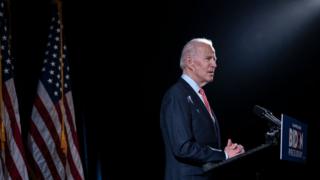 The debate over what it means to “believe women” – the rallying cry of the #MeToo movement – has escalated in recent weeks over a sexual assault allegation lodged against Joe Biden.

The accusation by a former staff assistant, Tara Reade, raises awkward questions for Democratic voters who previously said women’s complaints should be listened to and treated as credible.

It also means that both presidential candidates have been accused of – and denied – sexual assault.

The following three quotes explore some of these complicated questions.

The expression “believe women” – and its sister phrase: “believe survivors” – rose to prominence in tandem with the #MeToo movement, beginning in the autumn of 2017 when famed producer Harvey Weinstein was accused by dozens of women of sexual harassment, abuse or rape.

Advocates say it is a reaction to a historical assumption that women are prone to deceit. Critics see it as a dangerous overreach, a licence to ignore evidence.

“The reason that became a mantra was because interwoven so deeply in our culture was the idea that women and survivors were lying,” said Fatima Goss Graves, president of the National Women’s Law Center. Their concerns were deemed “so inherently suspect they were not worthy of being treated seriously”.

Less than a year later the phrase gained momentum when, in the midst of his confirmation to the US Supreme Court, Justice Brett Kavanaugh was accused of sexual assault by Christine Blasey Ford when the two were in high school. MeToo movement founder Tarana Burke led a national walkout in solidarity of Blasey Ford three days before her testimony, with participants using the hashtag #BelieveSurvivors.

It became a refrain among high-profile supporters of Blasey Ford and a number of high-profile Democrats pushing for further investigation of her claims, including Joe Biden.

The former vice-president told reporters then that when a woman comes forward with claims of sexual violence “at least the essence” of what she is saying should be presumed true, saying months later in an interview for PBS, that “women should be believed”.

Now, facing allegations of his own, Biden has been heavily criticised for an apparent about-face.

“Believing women means taking the woman’s claim seriously when she steps forward,” Biden said in a recent interview. “Then you have to look at the circumstances and facts.”

“The huntress war cry – ‘believe all women’ – has felt like a bracing corrective to a historic injustice,” wrote New York Times columnist Bari Weiss in 2017. But it could “rapidly be transmogrified into an ideological orthodoxy.”

But according to Goss Graves the “cut off their heads” approach is a distortion of the phrase’s meaning.

“Believe survivors’ never meant that was the beginning and the end of the inquiry,” Goss Graves said. “What it means is that you take it seriously.”

To some, the definition of “believe women” has expanded and contracted to suit the political needs of the moment. Reade’s claims invited a rush of appraisals of high-profile Democrats – especially women – weighing their response to Biden against past comments directed at Brett Kavanaugh.

“It’s difficult for survivors to see that a woman who has more corroborating sources than most survivors have in similar situations is being tossed aside and actively being weaponised by cynical political actors,” said Shaunna Thomas, a founder of women’s rights advocacy group UltraViolet, of Reade to the New York Times.

Michigan Governor Gretchen Whitmer, Senator Amy Klobuchar and Stacey Abrams – all high-profile Democrats, all reportedly short-listed as Biden’s running mate – were asked if they would still support the former vice-president.

“I believe women, and I believe survivors of violence always deserve to be supported and have their voices heard,” Abrams wrote in September 2018, after Blasey Ford’s testimony.

“I believe that women deserve to be heard,” Abrams said again last month, when asked about Biden, before citing an extensive investigation into Reade’s claims by the New York Times.

“They found that the accusation was not credible,” she said. “I believe Joe Biden.”

Abrams, like the other Democratic women asked to speak up for Biden, was charged with a political two-step: appearing to champion Blasey Ford while abandoning Reade.

“Why are many people still refusing to believe Reade?” wrote Kate Manne in The Nation. “Among the primary reasons… sheer political inconvenience.”

For anyone who wants Trump out of office in November, “admitting the credibility of Reade’s claims at this moment is painful and inconvenient indeed”, Manne said.

But while the allegations against Biden may be unwelcome, advocates reject the notion of a political calculation and the outsized pressure on female Democrats.

“You’re searching for some sort of hypocrisy,” Goss Graves said, “Rather than a solution.”

“To focus only on women leaders as if women are to blame is a real problem,” she added. “When I think about who’s fault this is, if we’re doling out blame, I’m not pointing first at leaders of the feminist movement.”

Still, the burden of defending Biden will surely fall to his vice-presidential pick who he has pledged will be a woman – adding a stumbling block to the coveted job offer.

It’s so far unclear how, if at all, Reade’s allegations will hurt Biden’s electoral chances as the presumed Democratic nominee.

President Trump has been accused by some two dozen women of sexual assault, claims he has dismissed, meaning that in November American voters will be handed ballots in which both major party candidates have been accused of sexual misconduct.

“How can you support this person who’s going against the standards you set for somebody else? At the end of the day, this is what voters are left with,” said Amy Walter, national editor of the Cook Political Report on NBC News. “How they battle this cognitive dissonance. And usually partisanship is what breaks the tie.”

And for some, this partisan bond means that even if they believe Reade, they will still vote for Biden as president.

“The behaviour he is alleged to have done is inexcusable,” said Democrat Stephanie Sims, board member of She Votes Illinois, which facilitates female political representation. “It doesn’t change the way I’m going to vote.”

“I have to look at the bigger picture as a voter. I have to look at what a Biden administration will do for this country,” she said. “It’s way more of a concern for me when 25 women have alleged sexual assault versus one.”

Even Lucy Flores, the former Nevada Assembly member who led the wave of women to accuse Biden of inappropriate touching last spring, told the New York Times that despite the “position of impossibility for so many women”, many would do the “right thing” and support Biden.

It’s an uncomfortable calculation for Democrats, for whom support for Biden is not so much an endorsement of their candidate and as it is a guard against Trump’s re-election.

“We cannot have Trump in office a day longer than his current term,” said Clara Masters, a political organiser in upstate New York, who supported progressives Elizabeth Warren and Bernie Sanders in the Democratic primaries. “My only option is to vote for Biden.”

“I feel like a hypocrite now, but too much is at stake.”