The death of George Floyd continued to cast its shadow over America today aa protesteers clashed with police on Saturday dutring the Justice for George rally in Philadelphia.

The protest began at noon outside of City Hall, where hundreds of people knelt in silence in honor of George Floyd.

The demonstartion turned violent later in the aftrenoon, when multiple police vehicles were attacked and set on fire by rioters.

State police say no troopers were injured and released a message on social media condemning the violence.

The statement said: “The demonstrators exercising their first amendment rights at City Hall and the Art Museum did so peacefully.

“We appreciate their voice and their manner of expression. However, since that time, others have convened in Center City and are committing criminal acts, including vandalism.

“Those acts will not be tolerated, and we strongly encourage everyone to refrain from entering Center City. We will continue provide updates throughout the evening.”

Mr Floyd died on Monday after an altercation with police in the Minnesota city of Minneapolis.

He was filed being arrested by law enforcement officilas.

He was forced to the ground, while an officer knelt on his neck.

Mr Floyd could be heard pleading with the law enforcement official, telling him he could not breathe.

Shortly afterwards he died, triggering violent riots in the Minnesota city, which then spread to other US cities.

Derek Chauvin, the police officer involved, has been charged with third-degree murder and second-degree manslaughter. 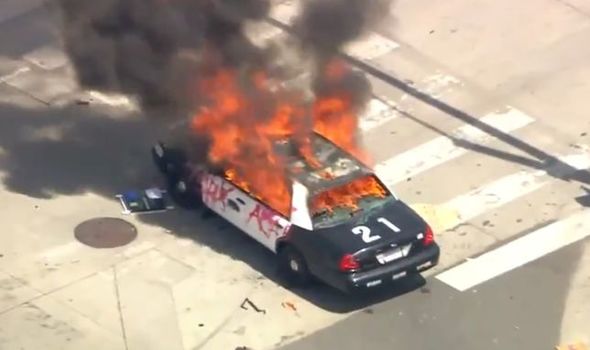 At a press conference. Chicago Mayor Lori Lightfoot had a special message for the US President, as America burns in the wake of the death of George Floyd.

Ms Lightfoot told reporters at a press conference:”I will code what I really want to say to Donald Trump—It begins with ‘F’ and it ends with ‘you.'”

Rioters have taken to the streets in Los Angeles, attacking and setting fire to more police cars, as vioenec around the US threatens to spiral out of control.

Demonstrators in Dallas have attacked police cars. Multiple occupied squad cars being damaged by rioters. Protesters who disagree with the violence being shouted down. Cops have begun to use tear gas & have called in the paddy wagon.

Protesters in Salt Lake City attack a police car. Demonstrators flipped the police vehicle over and set fire to it