US election polls have started to build up a reliable picture of who could win this year, as Donald Trump competes in a dead heat with former Vice President Joe Biden. The former is now nearing the end of his first term, marred by political controversy and a divided Congress. His perceived mishandling of the current crisis has hedged the public consensus against him, which now reflects in early polling.

Who will win the 2020 presidential election?

The presidential election seems easy to call at the moment, as Donald Trump is presiding over a pandemic which has proved disastrous for the US.

Nearly 150,000 people have died in the country, and Mr Trump’s representatives have warned the situation will get worse before it improves.

Early polls suggest the President’s conduct during the national crisis and heavy-handed response to the Black Lives Matter protests has allowed Joe Biden to take the lead. 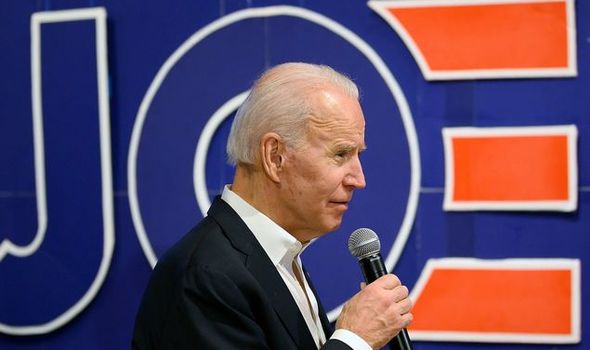 President Barack Obama’s former Vice is currently up at least 10 points on the incumbent President according to FiveThirtyEight.

The site, which compiles data from a spectrum of different polls put Donald Trump on 39 to 44 percent of the vote in many states, while Joe Biden nets 40 to 55 percent.

National poll averages have the President on just 41.9 percent of the vote.

He is behind Mr Biden, who is on 49.9 percent, by eight points in total.

He currently sits on an approval rate of 40.2 percent, not the lowest of his term, but graphs show public dissatisfaction is steadily growing.

His disapproval rate currently sits on 55.7 percent, again not his lowest, but this value is growing as well.

Should the trend continue into November, it would leave his position much weaker, but people are wary about the polls.

Joe Biden himself asked his followers on Twitter not to base their hopes on the polls, which have proved misleading in the past.

Indeed, Hillary Clinton led Donald Trump in the polls for much of the 2016 Presidential race, so much so it seemed she could not lose.

But the great upset of the elections proved people should not put too much stock in them.

In 2020, a similar trend seems to have developed, but this time supporters of Joe Biden have more cause to celebrate.

He currently sustains a hefty lead over Donald Trump, by an aggregated total of nine points.

The last time a candidate enjoyed such a lead was in 1996 when Bill Clinton steamed ahead of Bob Dole.

According to Oddschecker, Mr Biden is on odds of 8/13 to win this year.

Donald Trump, on the other hand, is currently on odds of 7/4.