There were emotional scenes and expectations raised the trapped harvest could begin to make a dent in the world food crisis as ship Razoni, laden with corn, sounded its horn on leaving Odesa at 6am. 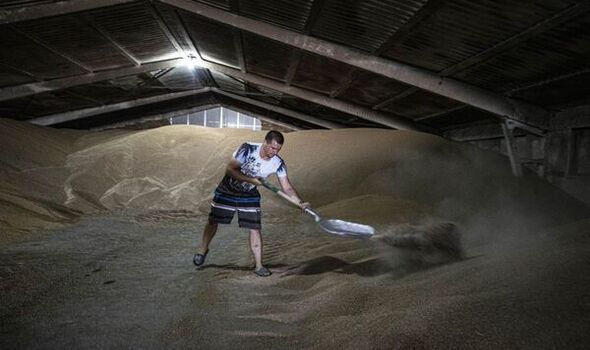 Turkey, which brokered the deal to restart exports, said “more will follow” in the days ahead.

Ukraine Infrastructure Minister Oleksandr Kubrakov added: “Thanks to the support of partner countries and the United Nations, we were able to fully implement the agreement.”

The historic departure comes amid attacks along Ukraine’s seaboard, not least one on Sunday that killed grain tycoon Oleksiy Va­­da­­­­tursky and his wife Raisa in port city Mykolaiv.

Russia’s invasion cut off supplies of a third of the world’s wheat supplies usually provided by the aggressor and Ukraine. Twenty-five million tons of grain have been languishing in Ukrainian silos for five months.

And the UN has warned of a “real risk” of famines this year.

Seventeen vessels docked in Ukraine’s Black Sea ports have 580,000 tons of grain aboard.

And Turkey said: “Deployment of other ships are planned.”

But skippers are said to be on high alert for rockets due to Vladimir Putin breaking the Istanbul agreement – hours after it was signed – with a missile attack on Odesa.

Exports should also be free to leave Pivdennyi port.

Ukrainian President Volodymyr Zelensky said: “Our goal is to prevent a global food crisis caused by the Russian invasion.”