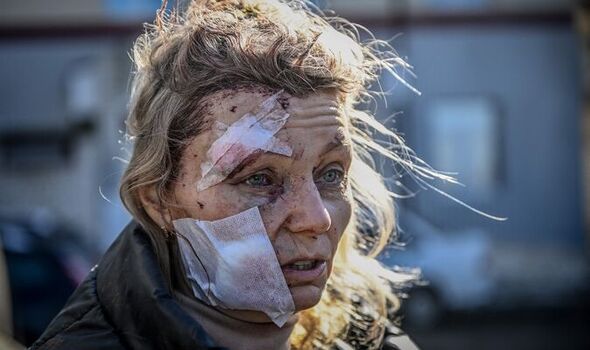 Thousands of people were hunkering down in Kyiv’s Metro stations – among the deepest in the world – just as Londoners sought out the Tube during the Blitz. But this played out in Europe in the 21st century as Russian missiles bombarded Ukraine’s capital.

Putin’s special forces and saboteur groups were already said to be active inside its perimeter. And Metro stations that serve Kyiv’s three million citizens filled up as air raid sirens blared in the background.

One resident Oxana Gulenko, a military medic whose father fought for the Soviet Union in Afghanistan, was earlier thrown 10ft from her bed by an explosion.

She said: “How can we live through it in our time? What should we think? Putin should be burnt in hell with his family.”

Anatoliy Marchenko, 57, who served in the Soviet army, was still searching for his cat after one strike took out his balcony.

Switching to Ukrainian, he added: “I know people in Russia, they are my friends.

“What do they need from me? A war has come to my house and that’s it.”

Bogdan Voytenko said: “I’m here because it is one of the only places right now where you can hide. Other places are terrifying.”

Sheltering Anton Mironov described his shock at the invasion, saying: “Nobody believed this war would start and that they would take Kyiv directly.

“I feel mostly fatigue. None of it feels real. I don’t even know how to relate to it.”

Anna Dudka, sitting beside friend Euhenia Lysenkom, said people just didn’t know how to react, saying: “In the morning, there was total panic, hysteria, tears, fear for your loved ones. It wasn’t clear what to do, where to run or how to behave.”

Photographs also showed hundreds filling the shelters of Kharkiv city, in Ukriane’s north east, with Mayor Ihor Terekhov urging people to seek refuge wherever they could.

One toddler was in her pushchair, oblivious as she played with a mobile phone. Groups huddled on the floor, wrapped up in coats and blankets.

Above ground, the destruction was devastating. Natali Sevriukova, a psychologist, put her hand over her mouth in despair after a rocket attack on her home in Kyiv.

In Kharkiv, a man was seen taking a photo of a Russian missile buried in a pedestrian crossing.

Yaryna Arieva and Sviatoslav Fursin responded to their country’s call to arms after getting married just as Russia launched its invasion. They immediately signed up with the Territorial Defence Forces, a branch of Ukraine’s armed forces with a backbone of volunteers.

They spent their first day as newlyweds collecting rifles. The nuptials were supposed to be in May but the couple were no longer sure what their future held.

Yaryna said: “We are doing everything we can. There is a lot of work to do, but I still hope everything will be OK.”

She confirmed that some civilians who are not part of the army were also given rifles to defend themselves.

Afshan Khan, Unicef’s regional director for Europe and Central Asia, added: “There have been major attacks in Kyiv that have created great fear and panic with families really scared, moving alongside their children into subways and shelters.

“This is clearly a terrifying moment for children across the country.”