Weather conditions across the UK have changed markedly this week, as the mercury dropped down to the low teens and windy downpours swept across the country. Forecasters expect the wetter and windier conditions to dominate over the next few weeks, with the first sprinkling of snow expected in northern parts from the start of October and heavier snowfall expected the following week.

Weather maps from Netweather show there is a chance of snowfall in parts of north west Scotland from Thursday, October 1.

The snow risk intensifies overnight, with forecasters stating there is a 50 percent chance of snow.

Temperatures in Scotland will barely reach the teens, averaging at about 6C.

The rest of the country will see chilly temperatures of between 7-14C.

Weather charts show the risk of snow in Scotland continues through Friday, October 2 and into the weekend. 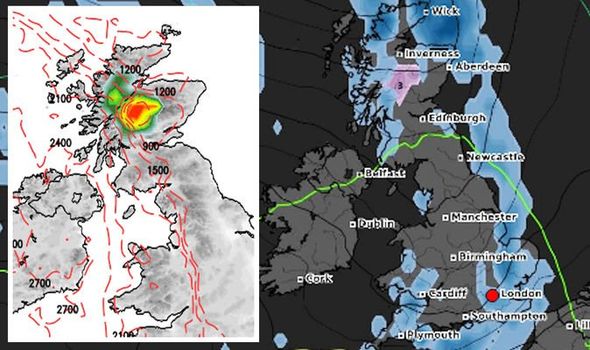 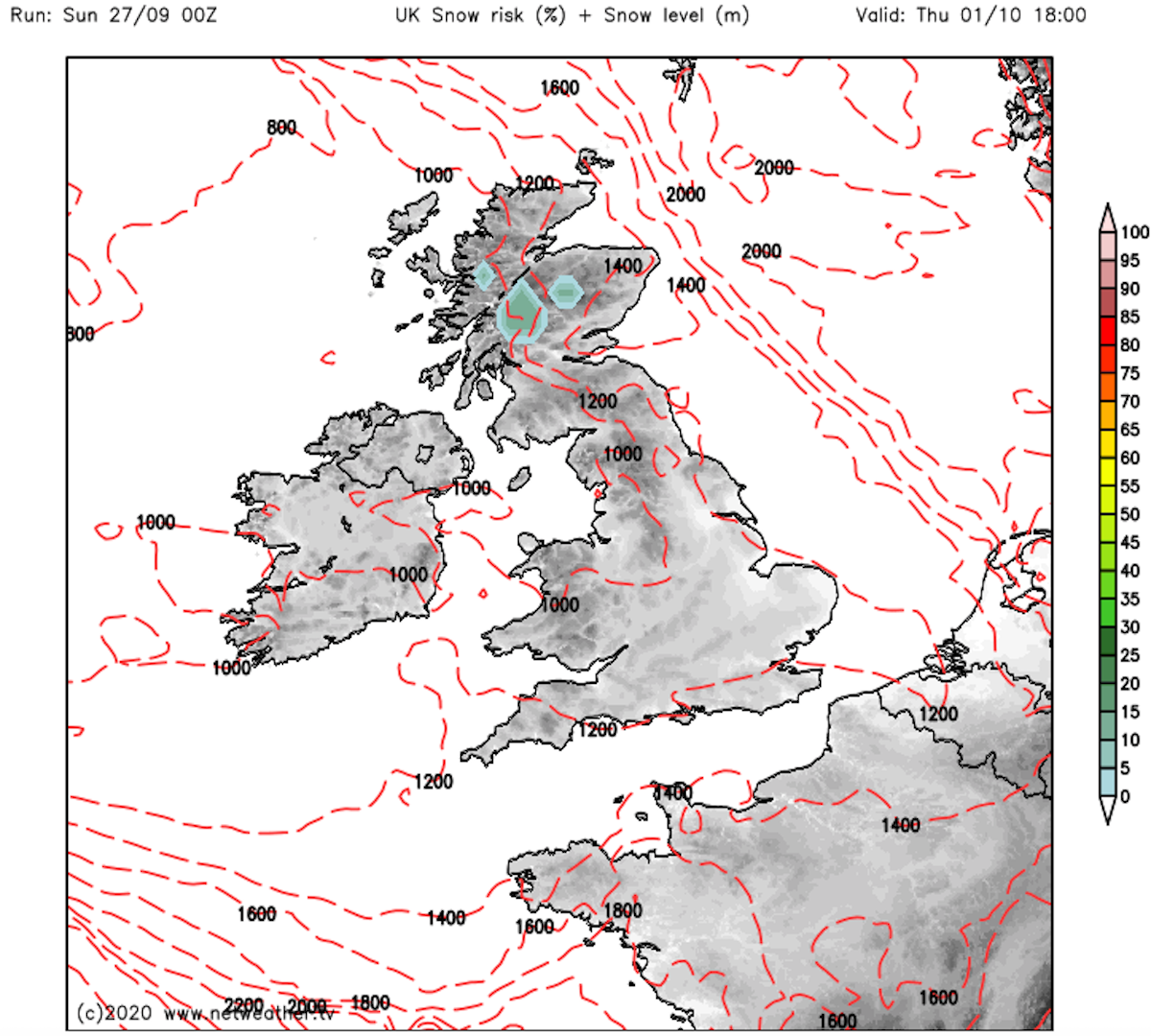 But by Saturday afternoon snow is no longer forecast.

BBC weather forecasters state the period from October 1 will be unsettled, characterised by wind and rain.

They state: “A large-scale low-pressure trough will take up residence near the UK by the second half of next week (and the first few days of October).

“This will bring frequent low-pressure systems over the UK, which will make the end of the week wet, windy at times, and generally unsettled.” 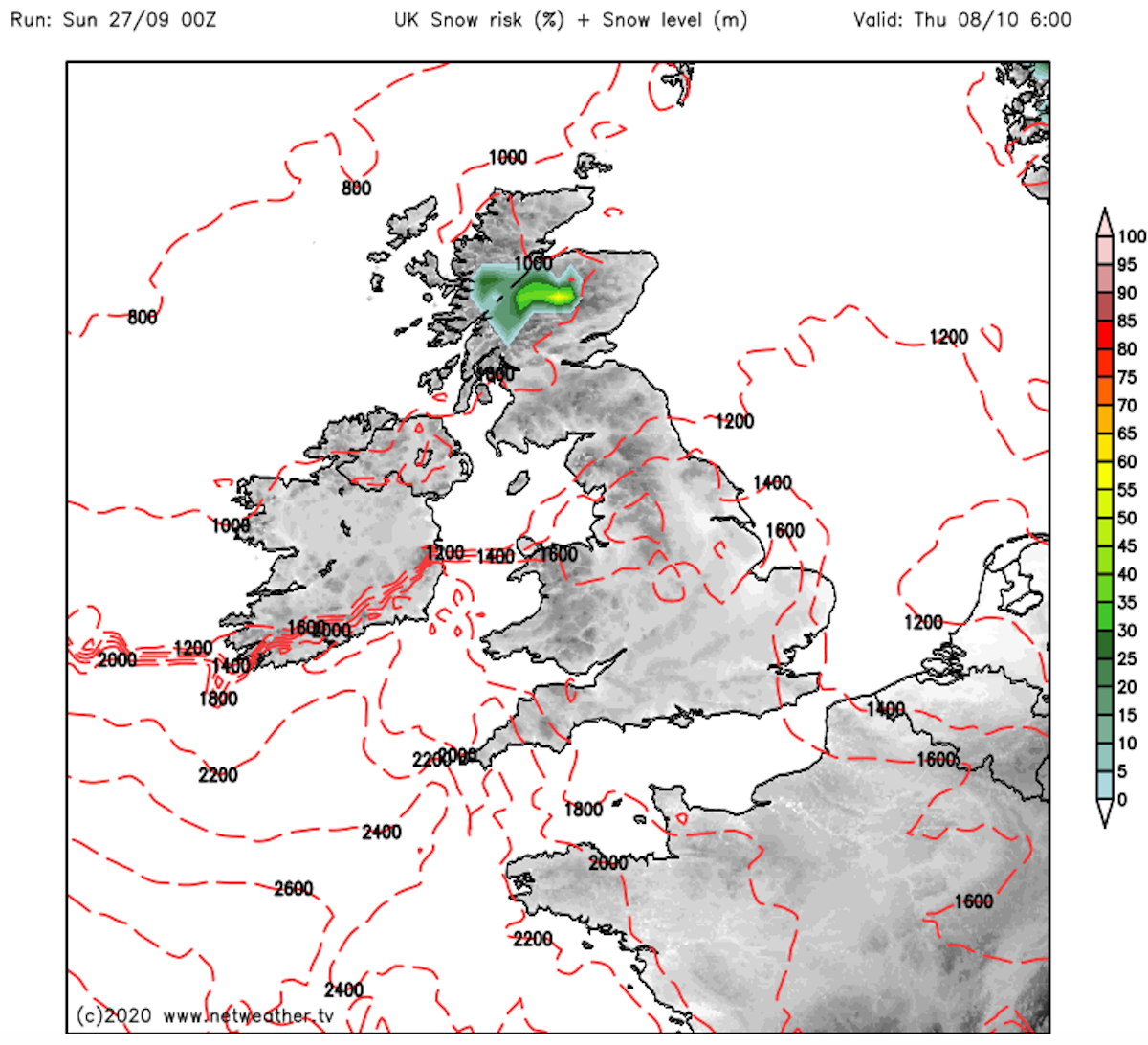 Southern and eastern parts of the UK can expect the worst of the wet weather.

At the start of the new week the unsettled, wet and windy conditions are set to continue.

BBC forecasters said: “For the first full week of October, the UK will be under the influence of low pressure.

“This is due to a large-scale weather pattern shift that will take place in the first few days of October. 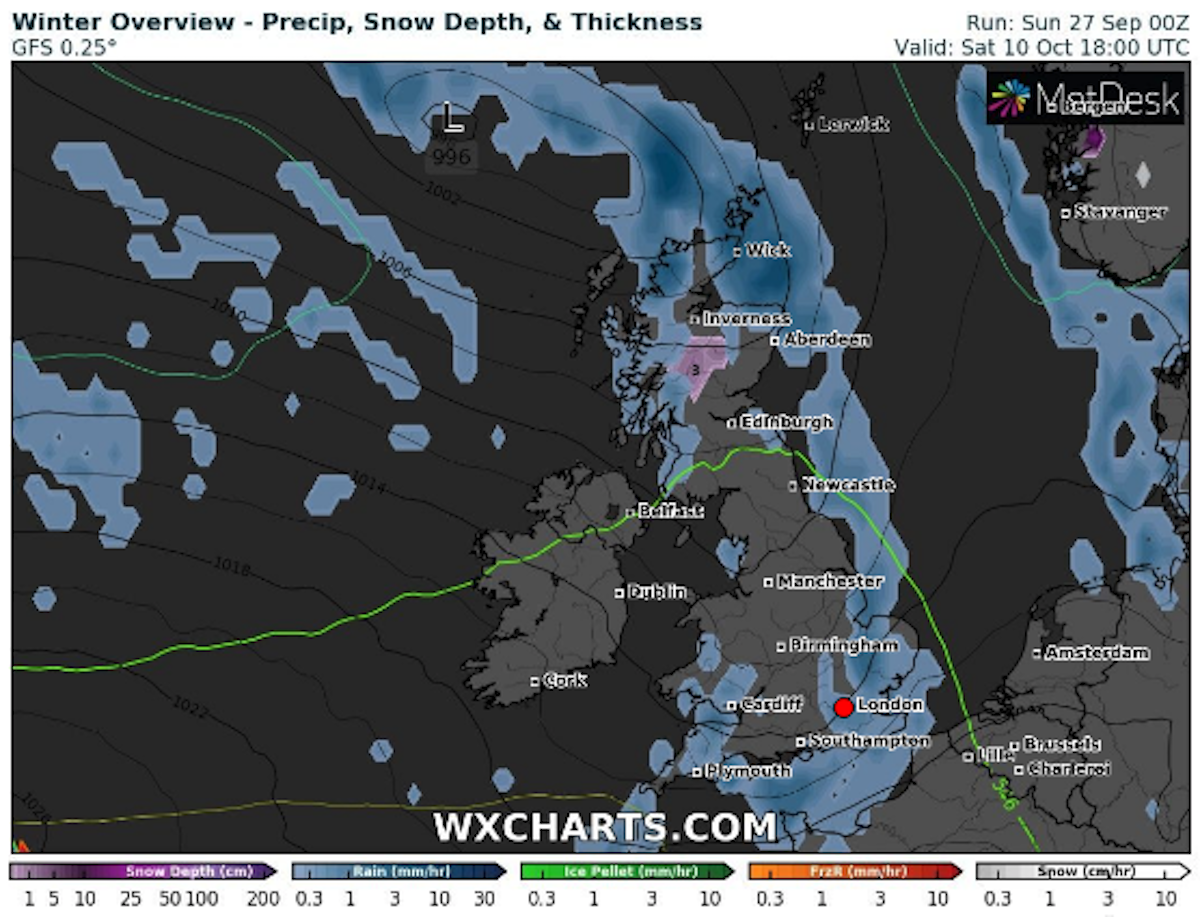 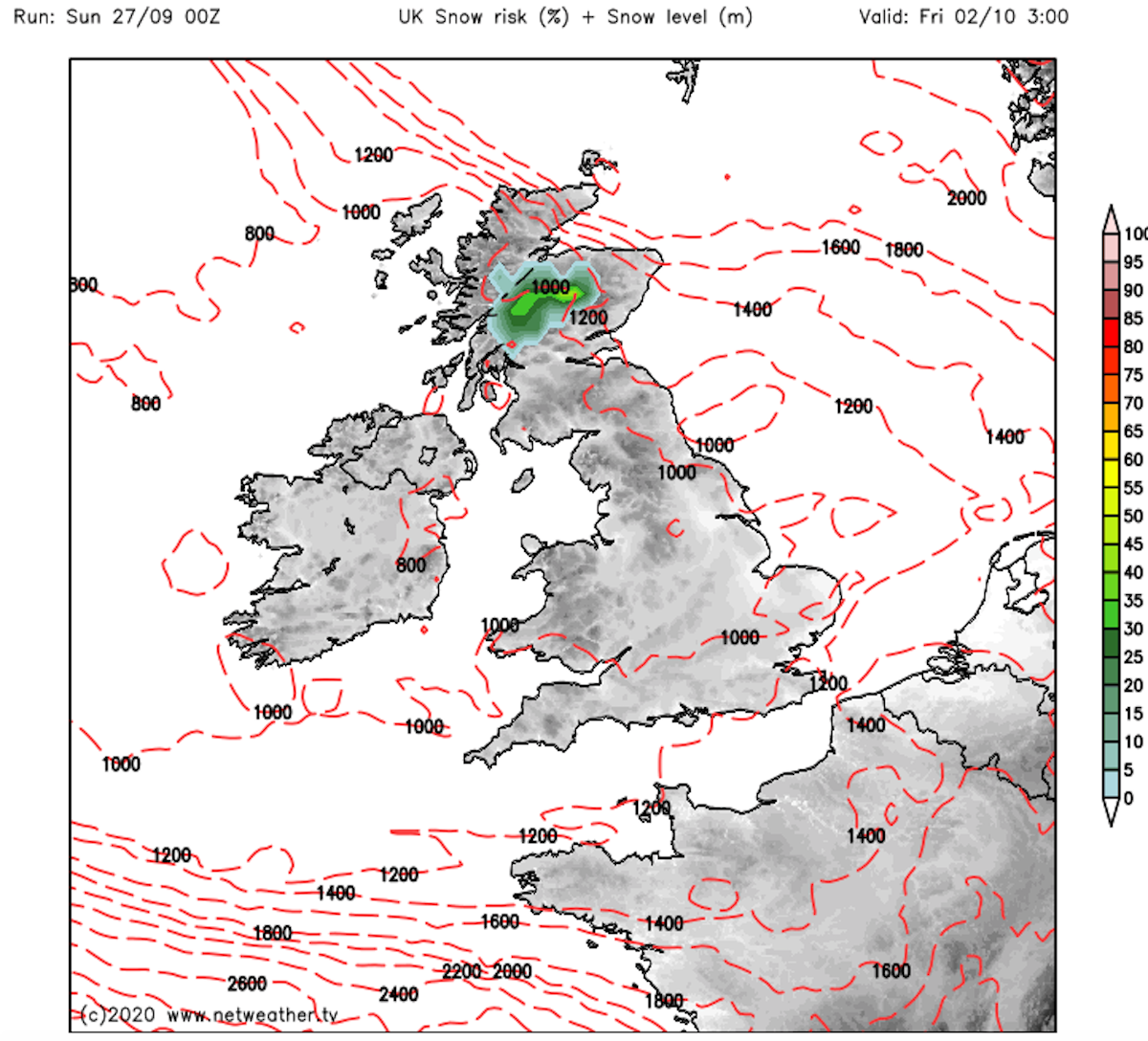 “What this means is that our weather is likely to stay unsettled and quite changeable, with frequent low-pressure systems bringing rain and winds across the country.

“As the low-pressure systems will often be overhead, the coldest air will tend to stay away to the north.”

The Met Office said the period will feel cold and frost is likely at night.

Netweather forecasters expect snow to fall in the early hours of Thursday, October 8 in northern parts of Scotland. 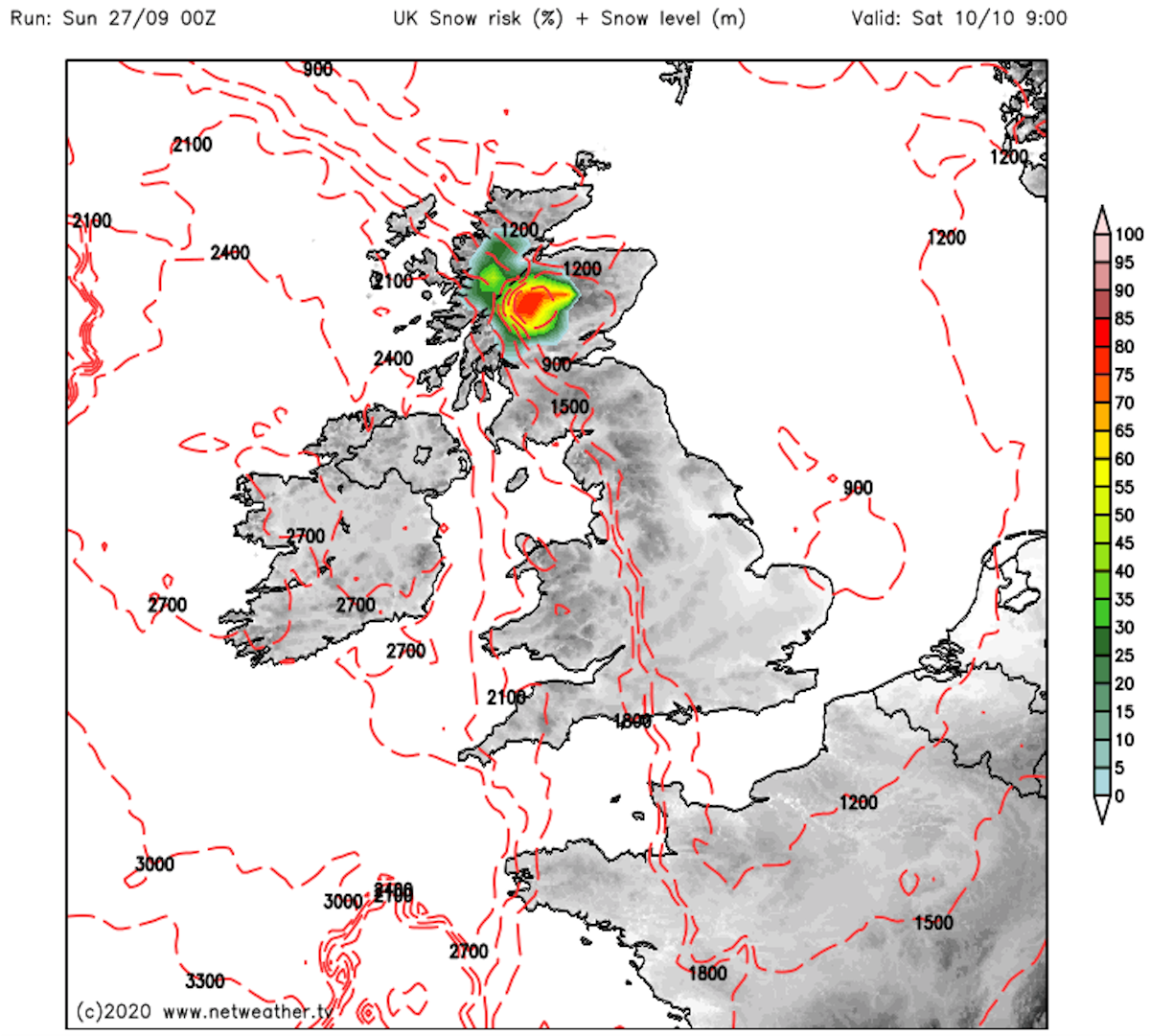 The risk of snow then rises dramatically by Saturday 10, with almost a 100 percent chance of snowfall in the same parts of Scotland.

By the second full week of October weather conditions are expected to shift to warmer spells as a new weather front sweeps across the UK.

The Met Office said: “A potential change in the weather is signalled around the middle of October.

“Whilst further rain and strong winds are likely at times, spells of fine and dry weather could become more widespread and long-lived.”