Weather forecasters have said that wintery conditions will be paused thanks to a 700 mile-wide “African heat bulge”. Temperatures are expected to soar up to 17C brining warmer weather for some parts of the country.

He added: “15C possible on Monday in eastern Scotland and a mild southerly flow for most of the next 16 days.”

The jetstream is way up to the north this week, according to forecasters.

Alex Deakin, Met Office Meteorologist, said: “An unusual position to see that far north early [this] week extending across Greenland and Scandinavia. So we’re on the warm side of the jet which is why it’s mild. 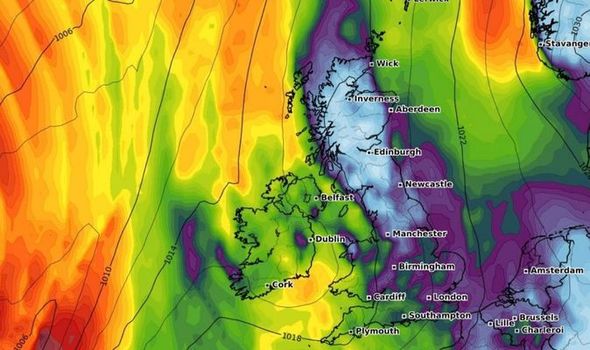 “With the jet really no influencing things, well the pressure pattern at the surface close to the UK is going to kind of stick.”

Mr Deakin said the position of the jetstream will last for most of this week.

He added: “That’s the battleground. High pressure to the east, low pressure to the west and when we have that set up well that means the winds are going to be coming in from the south.”

Southerly winds will cause temperatures to be “above average” according to Mr Deakin. 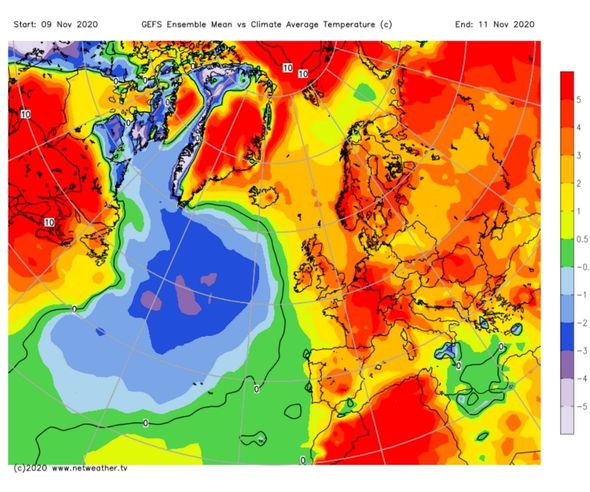 Tuesday is also set to be a mild day with patches of sunshine.

But he added: “There may even be some more chances to see some sunshine, but there’ll still be a reasonable amount of cloud drifting about.”

From Wednesday, however, winds will return to Britain as wintery conditions are expected to hit the UK later in the month. 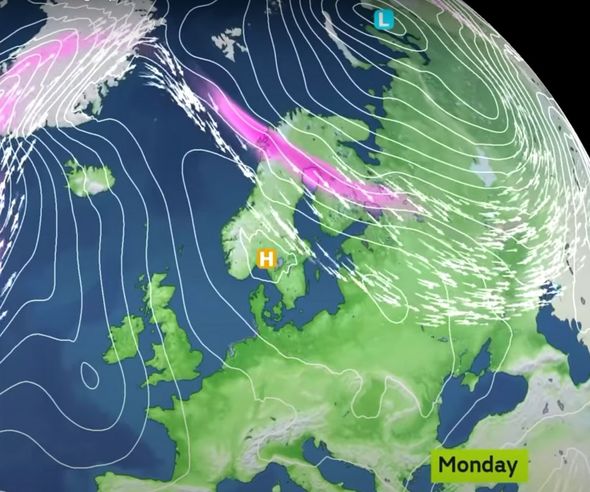 He added: “It looks mild or very mild further ahead, before an increased chance of colder-than-average conditions from late November.”

Met Office forecaster, Marco Petagna, added: “Mild southerly and south-westerly winds will be pumped up from a long way to the south.

“But more vigorous low pressure systems could make inroads, and an Atlantic-driven pattern is the trend for the long-term.”

Britons should make the most of the mild conditions at the beginning of this week as forecasters warn that rain and winds will come in midweek.

The Met Office said: “Through Wednesday we’ll start to see some weather fronts push in from the west and that’s going to bring a spell of heavy rain. 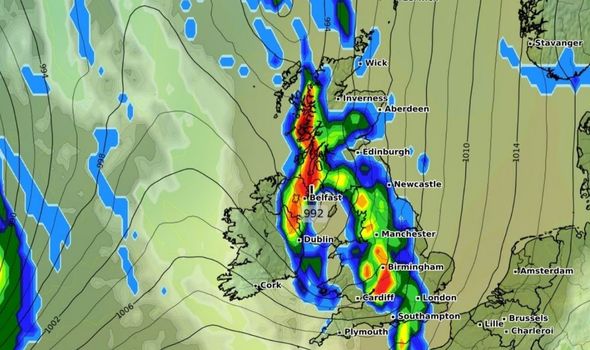 “With the rain it’s going to turn windy, particularly along the western coast where we could see some gales on Wednesday.”

Mr Michaelwaite warned that the weather will take a turn from late Tuesday into Wednesday.

He said: “Later in the day, a band of rain will approach from the Atlantic and is likely to close in on the west of Ireland and Western Scotland by evening.

“With it, southerly winds will strengthen with gales possible near to western coasts from then on, through into Wednesday.

“The rain will make quite erratic progress east during Wednesday, perhaps not clearing eastern counties of England and Scotland until well after dark.”