Temperatures will plummet into the single figures as forecasters warn that the weather will be unusually cold for this time of the year. Heavy rain will continue in some parts of the UK as gales bring blustery winds.

Aidan McGivern, Met Office Meteorologist, said: “Friday’s weather and indeed for much of the weekend will be dominated by a mixture of sunny spells but also some heavy rain or showers along with a blustery cool breeze.”

He added: “We’ve got this north westerly air flow bringing a couple of weather fronts but also bringing frequent heavy showers and that cool feel during the next few days.”

Paul Michaelwaite, Netweather forecaster, said: “It’ll be another cold feeling day for the time of year, with blustery northwest winds and maximum temperatures of 8-12c typically.”

Friday is set to start with “a touch of ground frost”, according to the Met Office. 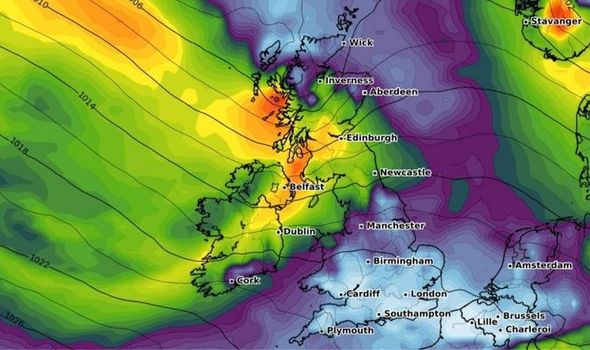 In central and southern parts of Britain there will be a chill in the air.

Mr McGivern added: “[An] area of rainfall which is balancing its way southeastwards, it’s going to bring a wet spell for Wales, northern England and then central and southern parts of England after lunch.

“Some fairly gusty winds with that as well along with a short period of heavy rainfall.”

The Environment Agency has one flood warning in place and 14 flood alerts. 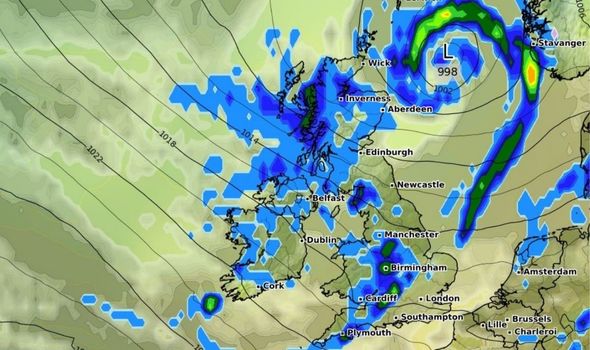 The flood warning covers the River Thame from Chiselhampton to Drayton St Leonard in Oxfordshire.

The Environment Agency has warned that “flooding of property, roads and farmland remains possible” in this area.

The Met Office has said there will be some “lively” downpours of rain with hail and thunderstorms in parts of the UK.

Mr McGivern said: “These are going to be some lively downpours with hail and thunder mixed in across central parts of the UK, southern Scotland, Northern Ireland, northern England, north Wales seeing some thunderstorms perhaps.” 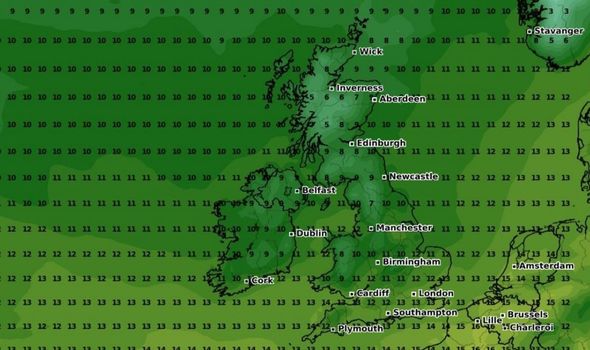 On Friday night into Saturday morning clearer spells will return to parts of the UK.

But it will be a chilly night for most as temperatures continue to drop bring some frost.

Mr McGivern said: “Another chilly night to come with a touch of frost in a few sheltered spots as we start off Saturday.”

Saturday will see a return to some sunny weather in certain spots.

But spells of rain will continue to effect northern parts of the UK. 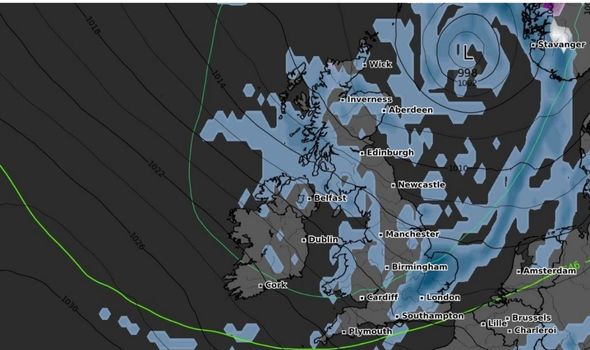 “Showers continuing to stream into northern and western areas. A bit cluster of them appearing in central parts of the UK first half of Saturday, some lively downpours.

“But really it’s a weekend of sunny spells and showers. Best of the sunny spells in the east. Most frequent showers to the west.

“It’s umbrellas up and down through the weekend I think.”

Temperatures on Saturday will remain in the low teens with averages of 11 to 15C expected in the UK.