After a grey week featuring showers and cooler temperatures, Friday, Saturday and Sunday are set to see a spike back to summer conditions with clearer skies.

At midday on Friday, the UK sees highs of 25C across the south east and east of England, while the rest of the country enjoys a moderate 15C to 20C.

However, conditions at this time are clear for Britons in the south east, with rainfall isolated to the east of Scotland and cloud converting into the midlands.

The hottest part of the day will be at 6pm, where south east England enjoys a hot 27C while up to the midlands sees between 25C to 26C. 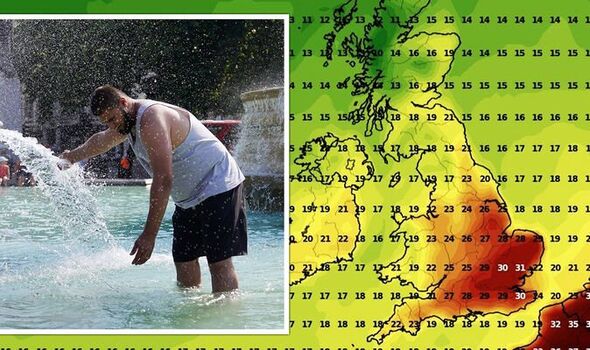 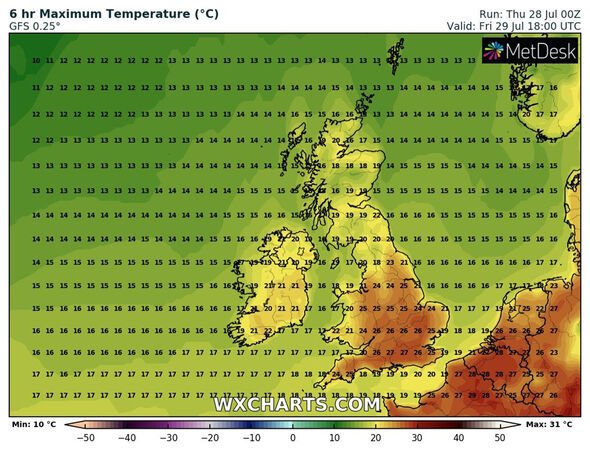 Overnight on Saturday, a north and south divide returns to the UK, with Atlantic rain pushing eastwards over Scotland and Northern Ireland, as well as some parts of north England.

According to WXCharts, at 3am these showers strike over much of Northern Ireland and the west coast of Scotland, while Friday’s eastern showers over Edinburgh strengthen to 3mm an hour in some ares.

By 9am, the worst of the weather will have subsided for many, with isolated showers in the midlands and 2mm an hour downpours in the Lake District.

Temperatures climb to 27C in the south east by 6pm on Saturday, while areas hit by rain see chillier conditions with 16C featuring in Northern Ireland, the east of Wales and Scotland and in Merseyside. 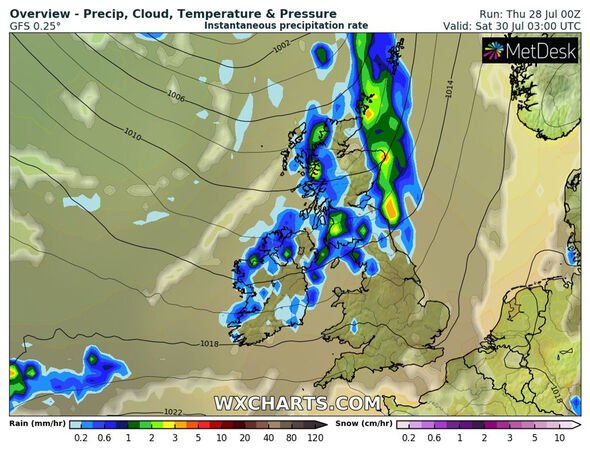 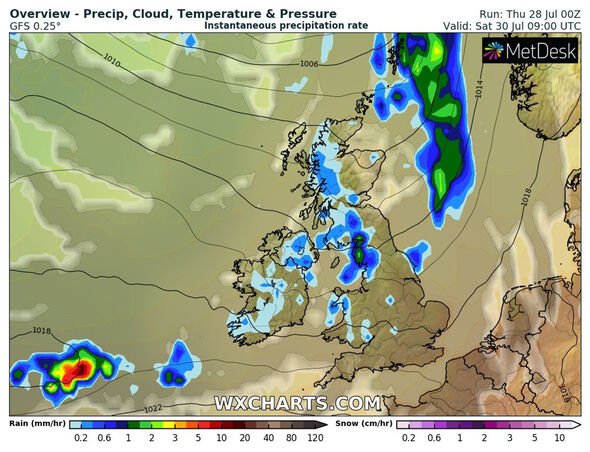 Jo Farrow, Netweather.tv forecaster, wrote for the agency’s website that the UK will end the week warm.

She said: “This is not the extreme heat of last week but a gradual rise with the peak temperatures edging towards 29, maybe 30C.

“After that, through the weekend and for early next week they stall. The temperatures stay in the mid 20sC with a fresher feel for Belfast and Glasgow in a westerly flow. Cambridge up to 27C on Sunday.

“For much of Britain, there will be a fine, warm Friday evening. Any of the week’s showers will have faded, there will be sunny spells and for southern Britain, inland temperatures still in the mid-twenties Celsius.

“This is in a light southerly flow but changes are looming from the west. Atlantic fronts will be pushing in through the weekend and the first band of rain will reach Northern Ireland and western Scotland during Friday evening.” 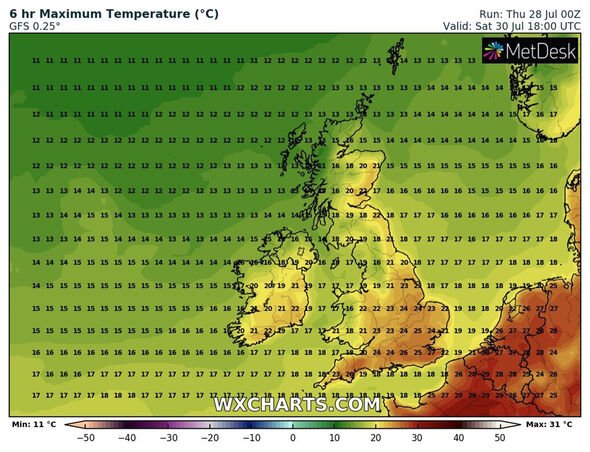 Ms Farrow then noted there “will be outbreaks of showery rain moving through” over the weekend.

She added: “The heaviest will be overnight Friday into Saturday morning with rain for Northern Ireland and Scotland but pulling southeast into northern England and NW Wales early Saturday, still in southern and eastern Scotland before becoming a fragmented band across central Britain late morning. 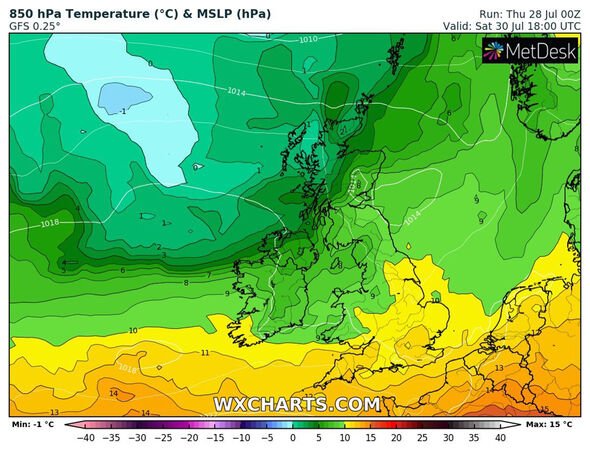 The Met Office’s five day forecast holds that the outlook for Saturday and Monday continues the north and south divide in weather conditions.

They said: “Rain crossing northern regions Saturday, reaching some central and southern areas by Sunday before the south brightens again on Monday.

They added in their outlook from August 1 to August 10: “Changeable conditions are expected for many at the start of the week, with outbreaks of light rain across central and southwestern parts.

“Meanwhile, the north and many southern areas may see mainly dry and bright conditions. The changeable regime will continue further into the week, with cloud and outbreaks or rain likely in the west and northwest.

“It will be drier in the southeast, but some cloud or rain remain possible here too. Temperatures will likely trend above average in the south and closer to normal in the north.

“Most areas may see some rain or showers towards the end of the period, although the southeast will remain mainly dry with sunny or clear periods.

“Generally near normal temperatures for the north, perhaps warm or very warm in the south.”