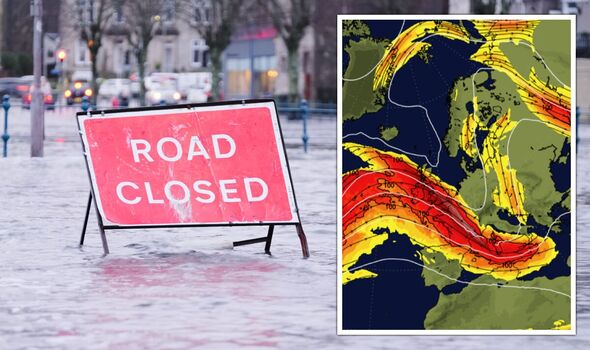 Britons face another fortnight of ‘hostile and exotic’ weather as a supercharged jet stream throws the UK onto the ‘path of ruin’.

Government meteorologists have sounded alarm bells for heavy rain this week while the Environment Agency has in force 70 flood alerts and 30 more serious flood warnings.

It comes after a weekend deluge left swathes of the country drenched and pushed across parts of Britain rivers to bursting point.

Torrential downpours and thunder driven by strong winds threaten no let up for the next 10 days at least, forecasters warn.

Jim Dale, meteorologist for British Weather Services, said: “We are stuck in a very hostile and changeable environment with thundery downpours and heavy showers likely to bring further flooding through this week.

“This is going to be the focus for the next fortnight as our weather is dominated by the jet stream steering low pressure systems in from the Atlantic.

“While we are on this path of ruin from the Atlantic, heavy downpours are going to keep raising the water table and bringing an increased risk of floods.

“Another front comes in on Tuesday, so we could see some more hostile and exotic weather conditions.”

Wind, rain and thunder across Britain will be driven by the knock-on effects of mild weather to the south of the UK and  the devastating mega-freeze which struck the US at the start of the year.

The massive temperature contrast where both airmasses meet has fired up the jet stream turning it into a conveyor belt, pulling volatile Atlantic storm systems into Britain.

Mr Dale, author of ‘Weather Or Not?’ said: “The jet stream is still strong, driven by cold air which has come down from the Arctic this month and met milder air to the south.

“It is picking up these low-pressure systems and steering them towards the UK, and this is likely to remain the pattern until the end of the month.

“Flooding will be a risk, and all it will take is one massive downpour in areas which are already very saturated to bring some severe flooding.”

Britons this week should brace for further torrential downpours, hellish driving conditions and the risk of flood damage, he added.

The Met Office has issued two warnings for four inches of rain on Tuesday across north-west England, the West Midlands, Yorkshire, Humber and Wales.

Those in affected areas should prepare for flooding of homes and businesses, travel disruption and power outages, it said.

The culprit is a huge low-pressure system wedged to the west of the UK, the driver for the foul weekend weather, and another low forecast to barge in this week.

Met Office meteorologist Aidan McGivern said: “Into Monday, that low pressure stays with us, but another area of low pressure is picked up by the jet stream and may bring some strong winds and heavy rain.

“It stays unsettled through next week, and we are back to above average temperatures for the next couple of weeks.”

Met Office meteorologist Simon Partridge added: “The blustery weather continues as we head into the new working week, and that is all down to an area of low pressure to the northwest of the UK.

“As we head into Tuesday, we will see another low-pressure system arrive from the west which will bring some more strong winds and some heavy rain.”

A dusting of snow will blanket the Scottish hills as temperatures dip closer to average for the time of year, he said.

But it will turn milder towards the middle of the week as southerly winds push temperatures into double figures, he added.

Weather models show 100km/h winds smashing into Britain this week as the jet stream ploughs across the country.