According to the BBC, freezing temperatures are set to start on October 26 leaving frosty landscapes. The week-long spell will also bring snow to northern parts of the country.

The forecasters added the coming week will be notably unsettled, as a strong jet stream over the north Atlantic heads towards the UK.

Temperatures will drop as low as 0C in central Scotland towards the end of October.

Northern areas of England including Newcastle and Liverpool will experience freezing temperatures as low as 3C.

The plunge in temperatures could lead to a layer of snow settling at the start of November in central and western Scotland, according to the latest snow depth models from WXCHARTS. 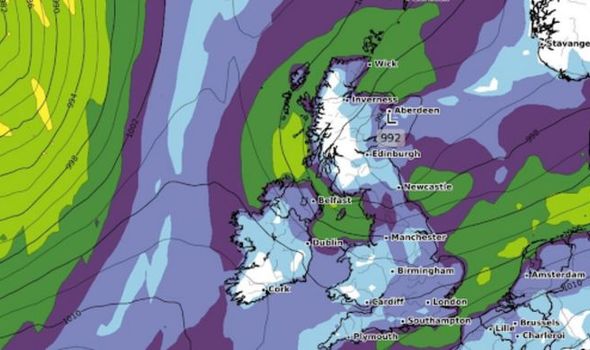 The BBC said: “A strong jet stream over the north Atlantic will steer more low pressure systems across the UK.

“Cold plunges of air across Canada and the northern USA seem to be one of the reasons why the jet stream will be so strong and areas of low pressure could be quite vigorous as they track towards the UK over the Atlantic.

“The cold air over Canada will contrast with the much warmer than average sea surface temperatures over the northwestern Atlantic.

“Strong contrasts in temperature give the jet stream added strength. 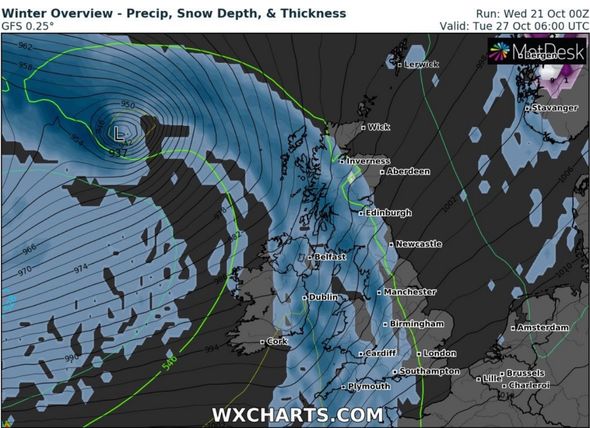 “With low pressure dominating the week, most of us should prepare for extensive cloud, spells of rain and strong winds at times.

“Southern and southeastern England will have a few drier and brighter days, between fronts.” 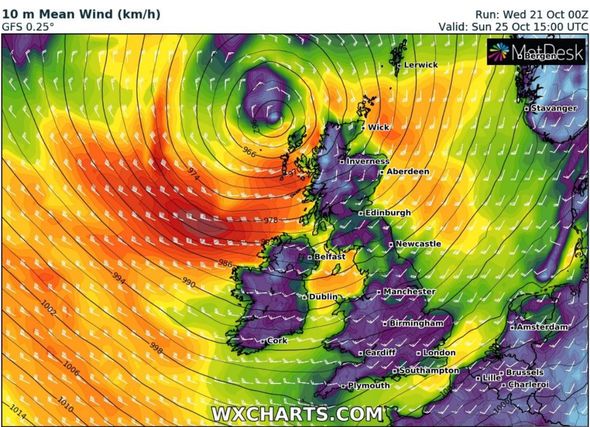 On Wednesday, Met Office meteorologist Clare Nasir said: “Now first thing tomorrow morning you can see the showers feeding in from the southwest across England and Wales.

“And again, there could be the odd heavy one with the rumble of thunder.

“Further north it’s that showery rain which will continue.

“We lose the intensity through the afternoon as that system tends to ease towards the North Sea.

“Even so a legacy of clouds and some showery rain. 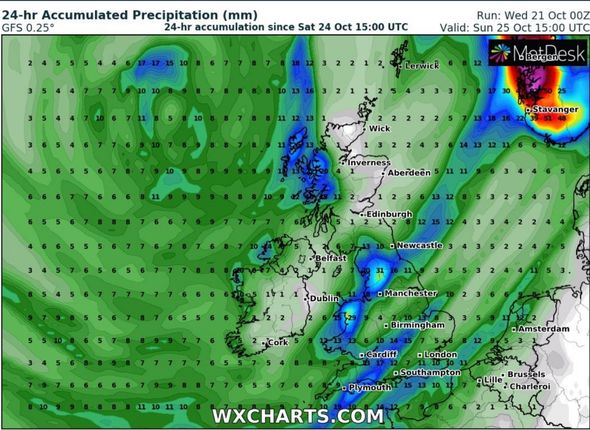 “Dry skies then move in from the west with a lighter wind so a quieter end to the day.

“But notice towards the west there we’ll see another band of rain come in with a southerly breeze and that heralds some wet and windy weather just moving in through Friday.”

Throughout Friday, showers will continue across the southeast.

There will be some dry skies either side of the showery region, however, “as that rain band weakens and pushes its way south eastwards we will see showers develop across the north and west”.

Ms Nasir added that temperatures will remain “typically around average for this time of year.”