Weather charts predict a low-pressure system will bring strong winds and widespread snow across the UK, with the cold weather starting tonight. The low-pressure system, named by the Met Office as Storm Darcy, will follow with a colder air mass from Russia, causing snow to fall across the East and South East of England.

The Met Office warned on Twitter this morning: “40-50mph wind gusts will cause snow drifts.”

And they said yesterday in their weekend forecast: “There will be strong easterly winds during this period which may lead to blizzard conditions and blowing and drifting of lying snow at times.”

WXCharts’ snow depth models reveal up to 7cm (2.75 inches) of snow will fall in the South East of England this weekend – with much heavier snow forecast in Scotland and higher ground tomorrow.

Snow depths across Scotland could also reach up to 31cm (12 inches) by 12pm on Sunday.

And temperatures will also plummet to as low as -1C across most parts of England tomorrow with highs of just 2C.

Meanwhile, Scotland and Wales will see lows of -2C and 0C respectively. 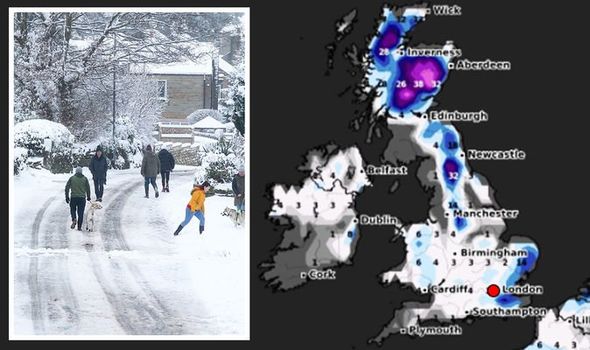 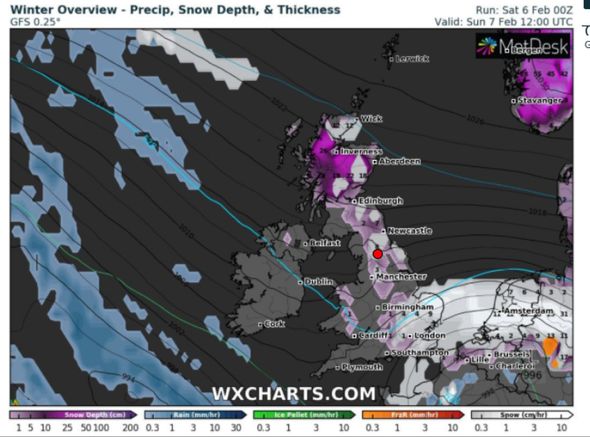 Overnight tonight, temperatures will be 2C across most the southern half of the country whilst in the north, the mercury will be as low as -1C.

The cold weather will continue next week with snow expected across huge swathes of the country.

On Tuesday, WXCharts has forecast up to 21cm (8 inches) of snow in parts of East Anglia, with 17cm (6.6 inches) across the Surrey Hills.

On Thursday, parts of the north-west of England will see 19cm (7.5 inches). 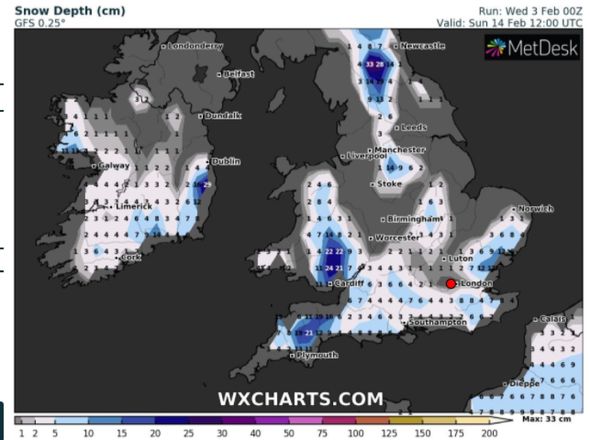 And on Friday, up to 32cm (12 inches) of snow could fall across northern England whilst up to 28cm (11 inches) is expected to fall in Surrey.

Met Office forecasters have issued yellow warnings for snow covering the length of Britain from Saturday, with a more serious amber warning in place for Scotland’s central Highlands.

The storm has also led the Met Office to issue an amber warning for snow for the south-east of England from early on Sunday morning.

Met Office forecaster Steven Keates said the worst of the snowy weather will be seen in parts of east Norfolk, east Suffolk, down towards Kent and around the Thames Estuary. 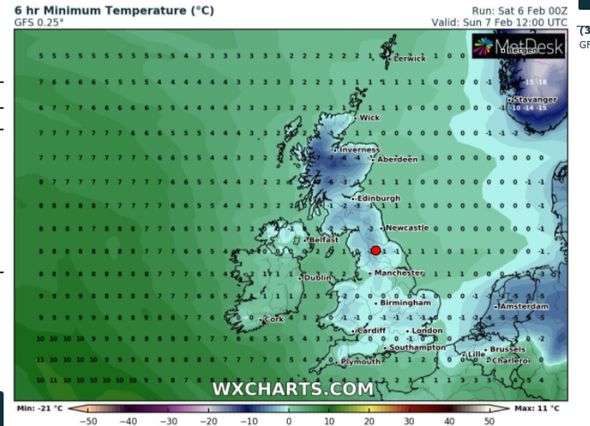 He added central London could expect a few centimetres of snow.

And Nick Finnis at Netweather said: “Although cold and wintry conditions with snow have lingered across the far north, it’s been milder over the last few days in the south and it may have felt spring-like in any sunshine yesterday.

“But don’t be fooled, because there will be a significant drop in temperature across all parts tonight, as a strengthening easterly wind brings very cold air from Scandinavia – which will also bring some heavy snow to some eastern areas on Sunday.

“Storm Darcy over the Low Countries will feed in more persistent snow across SE England and East Anglia tomorrow.” 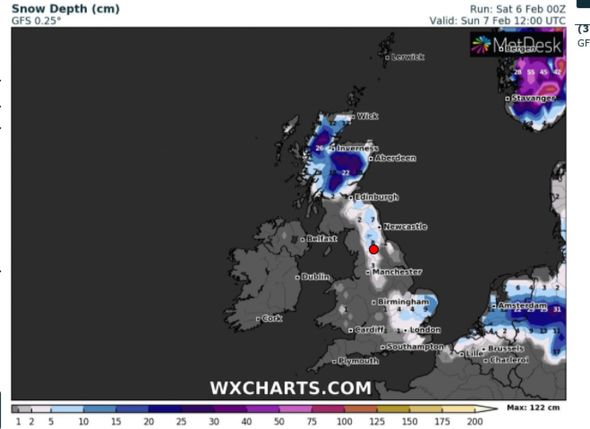 Into next week, forecasters say very cold arctic continental air will be present across most of the UK.

Met Office chief meteorologist Paul Gundersen, added: “The UK is in for a notably cold and snowy period over the next week, with very cold air in place over the whole of the UK by Sunday.

“Within the amber warning area, more widespread snow is expected and we could see 5-10 cm of snow quite widely, with a chance that a few places could see 20cm or more.”