Freezing air is predicted to sweep over the UK from a north-westerly direction at the end of November, the latest weather models suggest. The latest snow probability maps from WXCHARTS show a 10-30 percent chance of snow falling as far south as Birmingham, as the charts turn blue. But higher up in Scotland, the charts turn a shade of purple, suggesting there is a 50 percent of snow hitting at the end of next week.

Brian Gaze at Weather Outlook expected low pressure to sweep further down the UK away from Scotland on Friday, November 27, potentially bringing snow with it.

He said: “GFS 6z again shows lower pressure areas tracking a little further south with higher heights to the north of the UK.

“It is worth keeping an eye on and could produce a ‘surprise’ snow event, especially in the northern half of the UK.”

Temperatures are also forecast to plummet to sub-zero temperatures of -1C on Wednesday in Aberdeen. 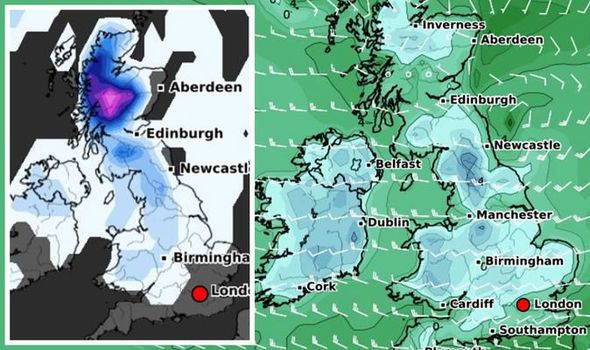 There could also be lows of 0C in central Scotland next Friday, according to WXCHARTS.

Southern regions including London and Surrey will not escape the chill as these areas could see lows of 2C next week.

The BBC’s long-range forecast between Monday, November 23 and Sunday, November 29, warned of a cold snap being expected to hit northern and eastern parts of the UK.

The forecast said: “A low pressure track near or overhead the UK is very likely during the final week of November, so we can all expect some more rain coupled with blustery winds. 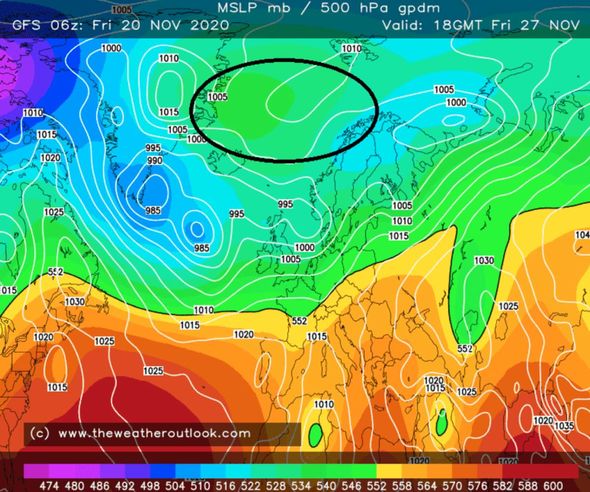 “The fine detail for this particular week has been tricky to pin down over the last few days, with forecast computer models showing a lot of variability in where they expect the focus of the low pressure track to be.

“The most likely outcome is that high pressure will be quite extensive over the near continent, more than we predicted in the previous update.

“This high pressure influence will help to steer the jet stream and its associated Atlantic low pressure areas just to the north and west of the UK on many days, with winds often blowing in from a mild south-westerly direction.

“This means that cold snaps are less likely and mild weather patterns should predominate, even at night. If we do see a cold snap it will just be for one or two days and most likely over northern and eastern areas of the UK. 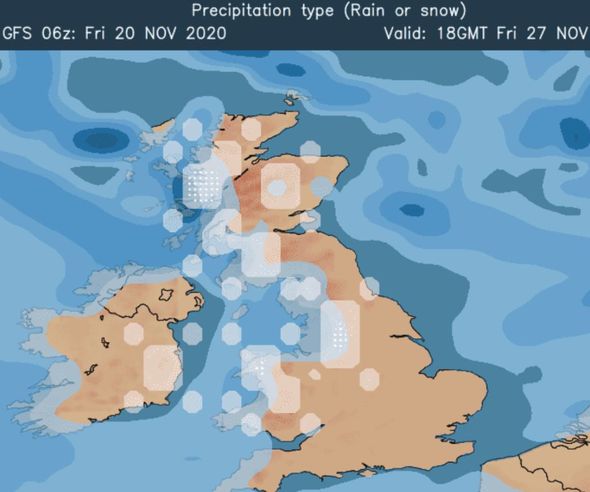 “Further bands of heavy rain and brisk south-westerly winds will feature. Gales are possible in the north during the second half of the week.

“North-western areas will be wetter than average, while rainfall amounts across the south and east will be closer to average, with most of the rain falling in the second half of the week.”

The long-range forecast between Wednesday, November 25 and Friday, December 4, said: “Outbreaks of rain are expected to cross the UK on Wednesday, with western areas receiving the heaviest rain. Blustery heavy showers are also likely to affect the far north of Scotland. 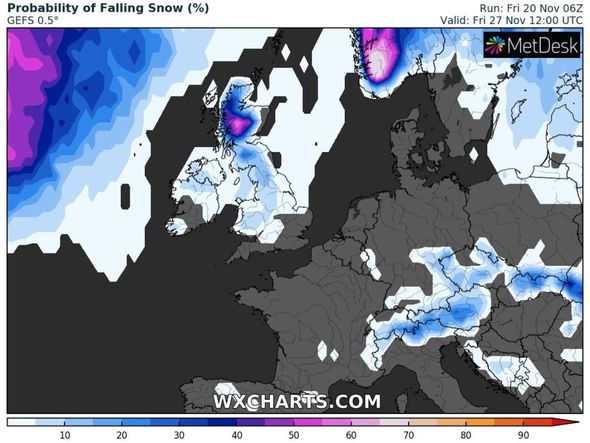 “Thursday and Friday could see further rainfall and strengthened winds for the north and west, but elsewhere the weather is likely to become more settled and colder, increasing the risks of frosts and morning fog.

“For the remainder of November and start of December, conditions will likely become more unsettled, with successive weather systems bringing rain and strong winds to the UK.

“Temperatures look to be around average for this time of year during this period, feeling reasonably cold with snow only likely on mountains, but it will turn mild at times when rain and cloud are present.”

Netweather’s forecast for December also predicted wintry weather in the north to linger past November. 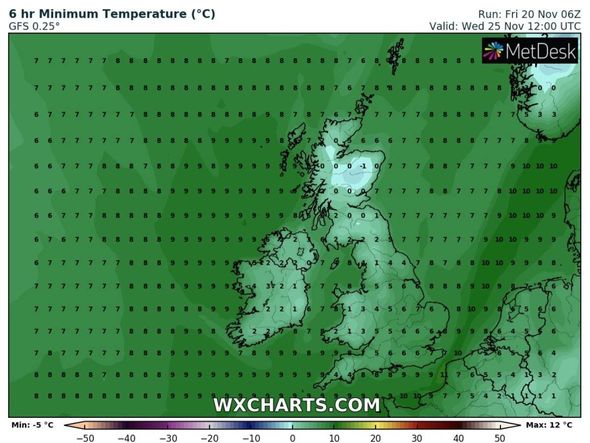 The forecast between Monday, November 30 and Sunday, December 6, said: “The weather is expected to turn colder during this week with high pressure dominant for much of the time, with potential for widespread overnight frosts.

“However, widespread snow is unlikely, although one or two short-lived northerlies are possible with pressure falling over northern Scandinavia, with wintry showers near north-facing coasts (only about 40 percent chance).

“Later in the week there are signs that westerly winds will start to establish, especially over the north, bringing milder, wetter and winder weather.”