This week’s sizzling heat is set to continue over the next fortnight, with the best of the summer sun expected on Tuesday, June 15. Temperatures are set to peak at 29C during the afternoon, with the whole of England and Wales expected to see the mercury soar to the high-20s, according to the latest weather charts.

New temperature charts from WXCharts show maximum temperatures won’t dip below 20C for much of the country over the next few weeks, as the sunny conditions continue to strike in the afternoon and early evening.

The summer sunshine is set to build over the coming days, with highs of 24C forecast through the start of next week.

Temperatures are set to soar even higher from Wednesday, June 9, as indicated by the weather maps.

Netweather charts show the whole of England, parts of Wales, western Scotland and Northern Ireland turn a deep red on Thursday afternoon as the mercury rises to the mid-20s. 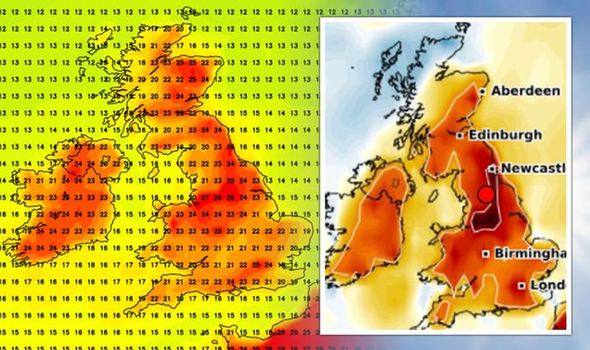 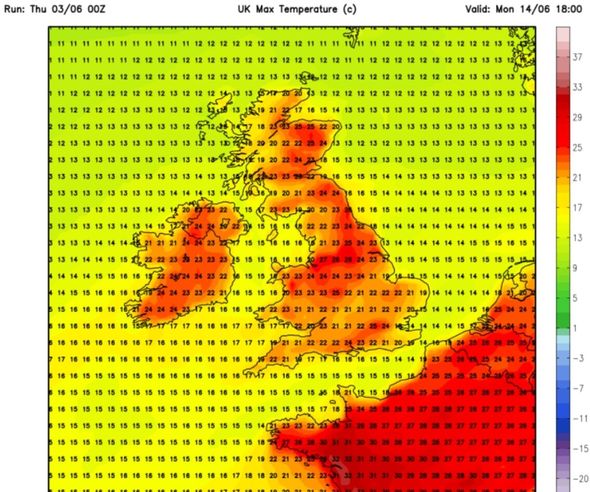 Highs of 25C are forecast in the capital, while much of the UK can expect temperatures to reach the low-to-mid-20s.

Friday, June 11 is set to be warmer still, with the whole country seen to turn a burnt red colour as the warm weather sweeps across the nation.

A scorching 25C is forecast in parts of the south east of England, Wales and Scotland.

Temperatures are set to go up a notch on Saturday, with 26C forecast in parts of England.

The blistering heat is set to continue through Sunday and into the start of the new working week. 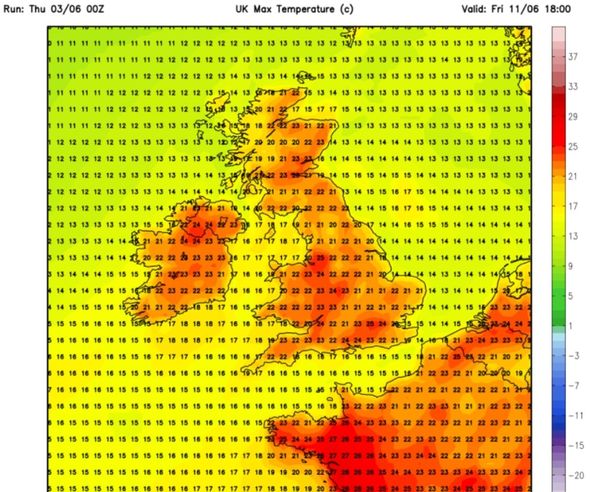 Highs of 27C are forecast by Monday afternoon, with much of the UK expecting the mercury to soar to the high-20s.

The highest temperatures are forecast for Tuesday, June 15, with Netweather expecting highs of 28C in the capital.

The chart shows much of England turn a deep blistering red as the scorching temperatures grip the nation.

Separate weather maps by WXCharts forecast 29C in the capital by 6pm on Tuesday, with highs of 26C seen further north. 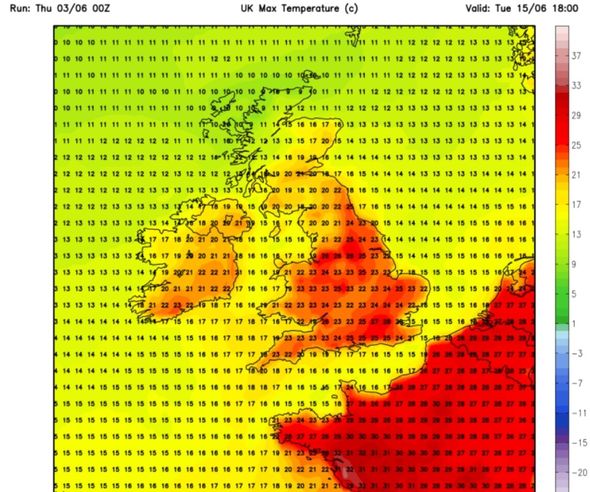 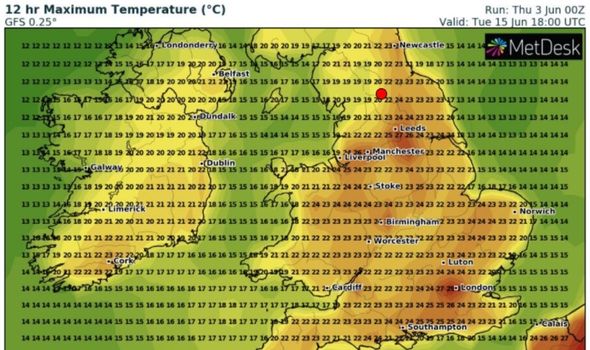 Temperature anomaly charts valid on June 15 show much of the UK turn a deep orange as the warm weather strikes.

The colouring compares what the predicted temperature is against what is considered normal.

The red colouring therefore indicates that the hot weather forecast for June 15 is much warmer than the typical seasonal average.

The following day is set to be a little cooler, with highs of 22C forecast along the south east and temperatures averaging 19C elsewhere in England.

Netweather forecasters predict a heatwave to strike from the week commencing June 14. 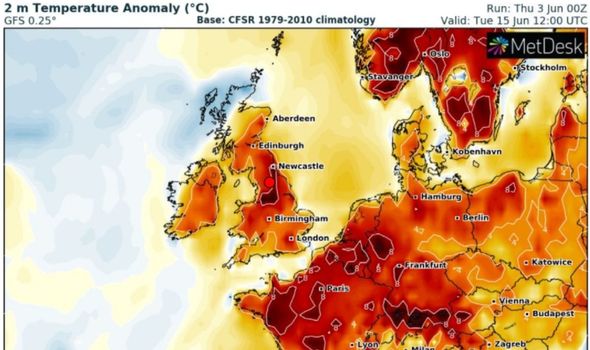 They said: “Temperatures are expected to be above normal early in the week, when a heatwave and thundery breakdown is possible, but near to slightly below normal late in the week.”

The Met Office’s forecast for the period Monday, June 7 to Wednesday, June 16 is characterized by warm spells and intermittent showers.

They said: “Rather mixed conditions are expected at the start of the period, with a good deal of fine and dry weather around, although outbreaks of rain and isolated showers are still possible, most likely affecting northern and western areas.

“Otherwise, temperatures will trend towards the warmer side of average.

“Into the latter half of the period, more settled and dry conditions are likely overall, though perhaps accompanied by the risk of some showers developing each day and longer spells of rain occurring at times.”