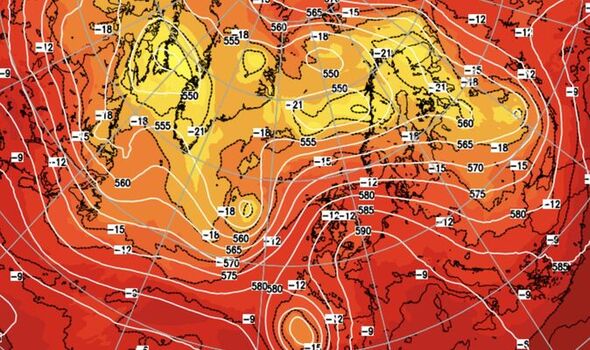 A ‘strange set up’ has caused the jet stream to fragment off the coast of Portugal leaving a spinning whirlpool to stream air from North Africa into Britain, the Met Office revealed. The innocuous looking, but deadly meteorological feature will surge towards Britain as high pressure builds to concentrate blistering heat.

Temperatures will rocket steadily today before hitting a possible 41C at the start of the week–triggering a national emergency.

Met Office meteorologist Aidan McGivern said: “On Sunday, temperatures will start to increase across much of England and Wales, and this is the first day that temperatures really start to ramp up.

“The reason for this is the jet stream, which has a fairly strange set up with a ‘cut off low’, high in the atmosphere, which we call a ‘vortex’.

“This has been circulating across the Portuguese coast and has helped to build and focus the heat across Spain and Portugal, and we have seen some remarkable temperatures, so high that even I don’t believe it.

“Through Sunday and through the start of the week this vortex will start to approach, and a plume of very hot air will cover the UK on Monday and Tuesday.”

The vortex will join forces with a huge region of high pressure which will smother Britain and force air towards the ground causing it to rapidly heat.

It will trap boiling air under a dome of heat as it engufls Britain pushing temperatures rocket to 33C today and steadily higher through the next 72 hours. 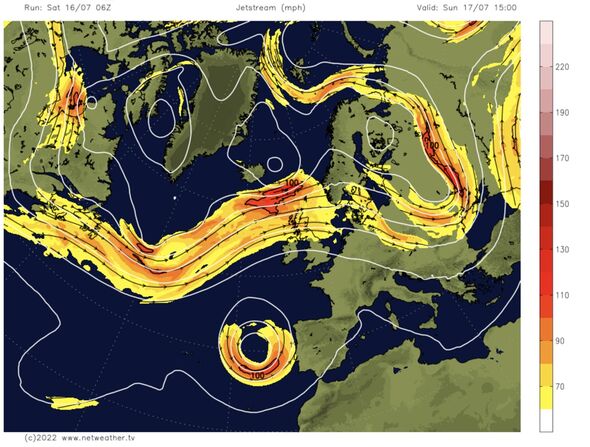 However, this unstable set up will collapse mid-week triggering a dramatic fall in temperatures.

Mr McGivern said: “High pressure is moving in widely across the UK, leading temperatures to rise because of an effect called ‘subsidence’–sinking air getting hot as it compresses.

“But we have also got this vortex which has helped to trap heat across the south of the UK.

“It is through Sunday, Monday and Tuesday that that heat will be pushed our way, but this is a very unstable set up, and there is a change on the way on Wednesday.”

Extreme heat ramps up early tomorrow with highs of 38C across the south before midday and between 20C and 25C across Scotland.

Temperatures will persist at an astonishing 38C at midnight before ramping up to 41C on Tuesday. 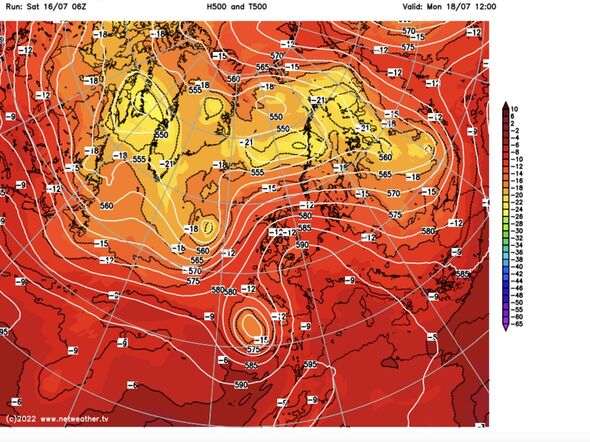 A huge drop in temperatures will bring highs of just 17C across much of Britain on Wednesday and 28C in the southeast.

They have urged people to avoid going out in the heat and to limit activities when temperatures are highest through the next two days.

The government held an emergency Cobra meeting at the end of last week as the alert level was raised to a level-4 ‘national emergency’. 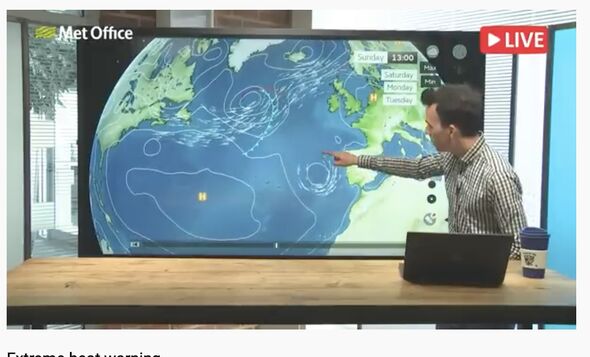 Dr Agostinho Sousa, head of extreme events and health protection at the UK Health Security, agency said: “We are likely to reach record temperatures at the start of next week, and it’s important we all know how to stay well in hot weather.

“Check up on vulnerable friends, family and neighbours to make sure they stay hydrated, keep cool and know how to keep their homes cool.”

Professor Penny Endersby, chief executive at the Met Office, added: “This is the first time we have issued a Red National Severe Weather warning for Extreme Heat and the first time 40C has been forecast in the UK.

“In this country we’re used to treating a hot spell as a chance to go and play in in the sun.

“This is not that sort of weather.”