Michael Atkinson was the first to inform Congress about anonymous Ukraine complaint that led to Trump’s impeachment. 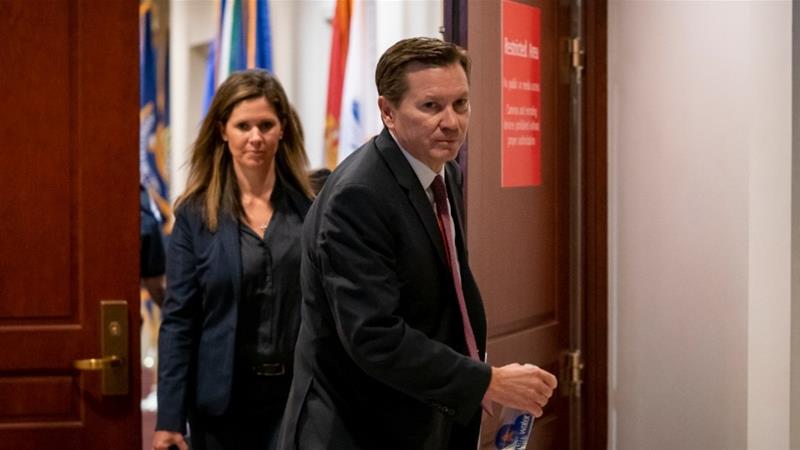 President Donald Trump has fired the inspector general for the intelligence community who handled the whistleblower complaint that triggered his impeachment.

Trump informed the Senate intelligence committee on Friday of his decision to fire Michael Atkinson, according to a letter obtained by The Associated Press.

Trump said in the letter that it is “vital” that he has confidence in the appointees serving as inspectors general, and “that is no longer the case with regard to this inspector general”.

He did not elaborate, except to say that “it is extremely important that we promote the economy, efficiency and effectiveness of federal programs and activities,” and that inspectors general are critical to those goals.

Atkinson was the first to inform Congress about an anonymous whistleblower complaint last year that described Trump’s pressure on Ukraine to investigate Democrat Joe Biden and his son. That complaint prompted a House investigation that ultimately resulted in Trump’s impeachment.

In letters to legislators in August and September, Atkinson said he believed the complaint was “urgent” and “credible”.

But the acting Director of National Intelligence at the time, Joseph Maguire, said he did not believe it met the definition of “urgent,” and tried to withhold the complaint from Congress.

After a firestorm, the White House released the complaint, revealing that Trump had asked Ukrainian President Volodymyr Zelenskyy in a July call to investigate the Bidens. The House launched an inquiry, and three months later voted to impeach Trump. The Republican-led Senate acquitted Trump in February.

Trump said in the letter that he would nominate an individual “who has my full confidence” at a later date.

Democrats reacted swiftly to Atkinson’s removal. The top Democrat on the Senate intelligence panel, Virginia Senator Mark Warner, said it was “unconscionable” that Trump would fire Atkinson amid the coronavirus pandemic.

“We should all be deeply disturbed by ongoing attempts to politicise the nation’s intelligence agencies,” Warner said.

Atkinson’s firing is part of a larger shakeup in the intelligence community.

Maguire, the former acting Director of National Intelligence, was also removed and replaced by a Trump loyalist, Richard Grenell. Trump has nominated Texas Representative John Ratcliffe to the permanent position, but the Senate has yet to move on his nomination.