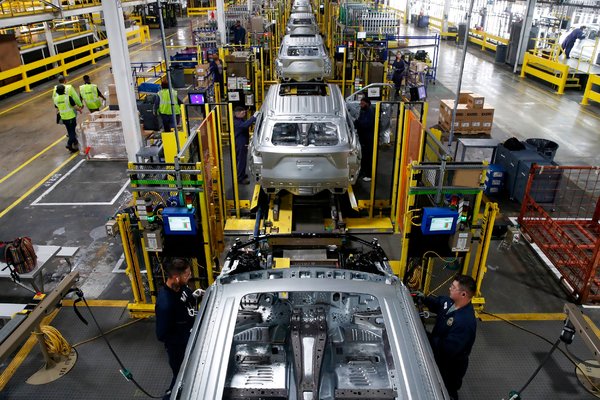 The new rule, written by the Environmental Protection Agency and the Department of Transportation, would allow vehicles on American roads to emits nearly a billion tons more carbon dioxide over the lifetime of the cars than they would have under the Obama standards and hundreds of millions of tons more than will be emitted under standards being implemented in Europe and Asia.

Trump administration officials have raced to complete the auto rule by this spring, even as the White House is consumed with responding to the coronavirus crisis. President Trump is expected to extol the rule, which will stand as one of the most consequential regulatory rollbacks of his administration, as a needed salve for an economy crippled by the pandemic.

The lower fuel-efficiency standard “is the single most important thing that the administration can do to fulfill President Trump’s campaign promise of reforming the regulatory state, and to undo the impact that the previous administration has had on the economy,” said Thomas J. Pyle, the president of the Institute for Energy Research, an organization that supports the use of fossil fuels.

Mr. Trump’s critics say the rule shows the president’s disregard for science and could actually harm the economy over time. The administration’s own draft economic analyses of the rule showed that it could hurt consumers by forcing them to purchase more gasoline. And a February report by a panel of government-appointed scientists, many of them selected by the Trump administration, concluded that “there are significant weaknesses in the scientific analysis” of the rule.

“This is not just an inopportune moment to finalize a major rule-making,” said Senator Thomas R. Carper of Delaware, the ranking Democrat on the Senate Environment Committee. “In this case, it’s a completely irresponsible one.”

Even many large automakers, which had asked Mr. Trump to slightly loosen the Obama-era rule, had urged him not to roll it back so aggressively, since that plan is certain to get bogged down in court for years, leaving their industry in regulatory limbo.

A spokesman for the Alliance of Automotive Innovation, the lobbying group that represents over a dozen of the world’s largest automakers, declined to comment on the still-unpublished rule.

The new rule, which is expected to be implemented by late spring, will roll back a 2012 rule that required automakers’ fleets to average about 54 miles per gallon by 2025. Instead, the fleets would have to average about 40 miles per gallon. To meet the new number, fuel economy standards would have to rise by about 1.5 percent a year, compared to the 5 percent annual increase required by the Obama rule. The industry has said it would increase fuel economy standards by about 2.4 percent a year without any regulation.

The new standard would lead to nearly a billion more tons of planet-warming carbon dioxide released and the consumption of about 80 billion more gallons of gasoline over the lifetime of the vehicles built during the terms of the rule, according to a recent draft of the plan.

For Mr. Trump, completing the rollback of his predecessor’s climate change policy caps a three-year march to weaken or undo nearly 100 rules and regulations that had limited industrial pollution of smog, toxic chemicals, greenhouse gases and water contaminants.

Businesses said those rules had hamstrung their growth and left them less competitive in a global economy. Environmentalists said they were vital to the health and future of the planet and its inhabitants.

For environmentalists, the tailpipe-emissions rule culminates Mr. Trump’s quest to dismantle the United States’ efforts to fight climate change, which has so far included pulling out of the global Paris climate change accord, weakening rules to curb greenhouse gas emissions from coal-fired electric plants, and undermining the basic science that underpins environmental regulations.

The regulation on vehicle fuel economy, first issued in 2009 and updated in 2012, was the first federal policy to lower emissions of greenhouse gases that causes climate change, and it remains the policy that would have reduced emissions the most, chiefly by targeting the nation’s largest source of climate-warming emissions: cars and trucks.

“In the march of rollbacks of climate rules, this is the biggest step,” said David Victor, director of the Laboratory on International Law and Regulation at the University of California, San Diego.

The new rule creates short-term regulatory relief for automakers, lifting requirements that had forced them to invest heavily in developing and marketing hybrid, electric and low-pollution vehicles.

But in the long run, analysts say, the new standard could actually bring more uncertainty to the auto industry. The legal status of the new Trump rule remains unclear; about 20 states are expected to sue the administration to undo it in a case expected to be resolved by the Supreme Court in the coming years. The new rule is also expected to become a divisive issue in the 2020 presidential campaign, with Democrats vowing to reinstate the Obama rule.

Trump administration officials have been plagued with difficulties and delays as they have tried to write a rule that would meet the president’s desire for a drastic regulatory rollback that also would be scientifically sound and legally defensible.

The chief cause of the delay has been an internal economic analysis concluding that the rule would harm consumers more than helping them. A draft of the rule sent to the White House in January calculated that the new fuel economy target would lower the prices of new cars and light trucks by about $1,000, but it would increase the amount consumers would pay for gasoline by about $1,400.

The administration’s draft analysis concluded that the rule could actually cost the American economy between $13 billion and $22 billion.

As administration officials sought to rework those numbers to show that the rule would help consumers, automakers pushed the White House to complete the rule by March 30, the deadline needed to begin manufacturing vehicles under the new standard for the 2022 model year.

Over the weekend, White House officials looked at a new option for their cost-benefit analysis, according to two people familiar with the matter, who asked to speak anonymously because the rule was not yet final. The new analysis would put a price tag on consumer preference for less fuel-efficient vehicles, between $38 billion and $58 billion, hoping to show an economic benefit for removing the requirement that auto companies sell higher-mileage cars.

Some analysts scoffed at that assertion.

“It’s not going to be supported by the science,” said Chet France, a former senior E.P.A. vehicle emissions specialist who is now a consultant who works with the Environmental Defense Fund, an advocacy group. This will be the icing on cake of the legal flaws.”

If the rule does survive legal challenges, it would put the United States out of step with the rest of the global auto market, moving it from one of the strongest fuel economy standards in the world to one of the weakest. The American standard would be lower than those of the European Union, China, India, Japan and South Korea. That could present long-term challenges to the American auto industry, as other automakers develop more sophisticated, high-efficiency, low-pollution vehicles while American ones focus on gas guzzlers.

“The U.S. went from being the laggard of the world on these standards, to being the country that was setting the pace for the rest of the world — and now it’s going back to being the laggard,” said Anup Bandivadekar, director of the passenger vehicle program for the International Council on Clean Transportation, a nonprofit research organization. “Among the major markets, automakers now will no longer first have to think of U.S.”

The new measure will combine with a related rule, issued last year, that revoked the right of California and other states to set their own tougher vehicle emissions standards. California has spearheaded a pair of multistate lawsuits to block both rules, escalating a political war between Mr. Trump and the nation’s most populous state.

Those legal wars have already left automakers in limbo. The chief executives of the Big Three automakers personally asked Mr. Trump at the outset of his administration to loosen the Obama auto rules, chiefly by giving them a longer timeline to comply, but many auto executives grew alarmed at the scale of the president’s rollbacks and the lawsuits they triggered.

In a letter to Mr. Trump last June, 17 companies — including Ford, General Motors, Toyota and Volvo — asked Mr. Trump to go back to the negotiating table on the planned rollback, saying a drastic reversal threatened to cut their profits and produce “untenable” instability. They predicted “an extended period of litigation and instability” if his plans were implemented.

“We strongly believe the best path to preserve good auto jobs and keep new vehicles affordable for more Americans is a final rule supported by all parties — including California,” the companies wrote.

Then, in July, four automakers — Ford Motor Company, Volkswagen of America, Honda and BMW — announced that they had struck a deal with California to comply with state-level standards that demand fuel economy of 51 miles per gallon by 2026.

Ultimately, the limits on atmospheric emissions will likely be decided by the Supreme Court. Automakers most fear verdicts that uphold the legal authority of California and other states to enact their own standards, and allow the Trump standards to move forward elsewhere. That would split the nation’s auto market in two.

“One thing we’ve learned from the Trump administration is be careful what you ask for,” said Dr. Victor of the University of California, San Diego.

“The auto industry wanted a smoother glide path to a more efficient future,” he added. “Instead what they got was the populist politics of the far right, which is blowing up in their faces.”

Mr. Trump’s defenders say his moves are not aimed at automakers but at consumers who generally prefer larger vehicles, such as pickup trucks and sport utility vehicles.

“He’s not doing it to be conciliatory to industry, he’s doing it for consumers, and for his own personal and political reason,” Mr. Pyle said.