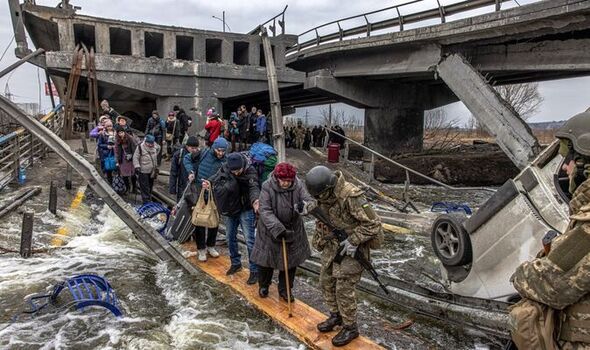 With Vladimir Putin said to be furious at the slow pace of the invasion, Moscow’s forces were yesterday massing for a deadly attack on the capital, with tanks and motorised infantry units advancing towards the nearby city of Irpin.

It came as mass graves of civilians killed in the Russian bombing of Chernihiv were pictured yesterday, with the coffins buried in trenches.

The main cemetery was under constant shelling by the Russian occupiers so the victims had to be buried in the Yalivshchyna forest.

An estimated 25 civilians were killed when a bread factory was hit by a Russian air strike in Makariv in the Kyiv region.

The bodies of at least 13 people were recovered from the rubble.

Five of the 30 people believed to have been in there were rescued. The others remain unaccounted for.

The attacks were condemned by Ukraine’s furious Prime Minister Volodymyr Zelensky. In a televised address he said: “It’s murder, deliberate murder. We will not forgive, we will not forget, we will punish everyone who committed atrocities in this war on our land. There will be no quiet place on this Earth except the grave.”

Meanwhile, the 40-mile Russian convoy heading down from the north is just a few miles from the capital. Ukrainian military chiefs say Russian troops have started to “accumulate resources to storm Kyiv” and are likely to attack in days.

Both sides said a third round of talks was due at an undisclosed location in Belarus, although two previous rounds yielded little beyond pledges to open routes for humanitarian access which have yet to be implemented successfully.

Russia claimed it was holding a temporary ceasefire and opening humanitarian corridors in areas such as Kyiv, Mariupol, Kharkiv and Sumy.

But people in some parts of Ukraine were only allowed to flee to Russia or its ally Belarus, which Ukraine described as “immoral.”

And a top International Red Cross official warned one proposed humanitarian zone in Mariupol, was covered in landmines.

The Institute for the Study of War, a nonpartisan public policy research organisation, said intelligence reports showed Russian troops had regrouped in the last 24 hours and started preparing for offensive operations in Kyiv, Kharkiv and Mykolayiv.

As illegal cluster bombs and missile attacks continued, those frantically trying to flee were finding obstacles in their path.

In Irpin, elderly refugees were seen gingerly walking across boards laid out across the city’s river. They picked their way through a mass of rubble, jagged boulders and metal bars that now litter the river bed.

The rubble was all that remained of the bridge blown up by Ukrainian forces to block – or at least slow – Russian armour reaching Kyiv. Planks were balanced precariously on the wreckage.

A woman called Valentina said: “Everything is bombed. There are no lights, there’s been no electricity, no gas, and no internet for two to three days. People are sitting in the basements and kids are sick.”

More missiles struck Mariupol, where residents are running out of food and have no power or water.

Russia also claimed to have destroyed the Starokostiantyniv military air base.

It is believed the Kremlin is “likely laying the domestic information groundwork for a declaration of martial law in Russia” should Putin decide “mass mobilisation and conscription are necessary to achieve his objectives”.

Conflict would only be halted, the Kremlin said, if Ukraine did four things: cease military action; change its constitution to enshrine neutrality; acknowledge Crimea as a Russian territory; and recognise the separatist republics of Donetsk and Lugansk as independent.

Experts said the Ukrainian government would never give in to such demands. Among those killed in Irpin was a Ukrainian actor and TV host called Pasha Lee, 33, who enlisted in the Territorial Defence Forces.

AFTER an unusual warm spell around Kyiv, frost is returning to harden the land and the will of the Ukrainian people and army to defend it.

“They thought they were coming south for a vacation. Now let them freeze outside the city,” a woman shouts across the counter of the shop where she works.

She and other Ukrainians have been watching with horror as Russian troops pummel civilian infrastructure and fleeing women and children in the once sleepy towns just north of the capital.

Many have already lost friends, relatives and acquaintances, making them sick with a fear fast turning to defiance and determination.

And this resolve is also reflected in Kyiv’s burgeoning defences. Block posts of concrete barriers have become bigger, more impenetrable.

The Territorial Defence has evolved too, many now in proper uniforms, holding their weapon like real soldiers.

Most of them behave professionally but the tension is clear in their demeanours and voices.

If their suspicions are raised, they ask questions to which only a local would know the answer: “What street do you live on? What’s near by?”

Perhaps not unusually, as the siege of the capital unfolds everything gets reduced to us and them.

“Be on the look out for them,” a soldier exhorts a long queue in a supermarket. “They don’t understand our language, Surzhyk,” he jokes, referring to the mixture of Russian and Ukrainian that many here informally use.

In fact, the Russian army has already breached Kyiv, entering northern districts of the city during the first weekend after war was declared.

To the surprise of many, the Ukrainians beat them back almost overnight. Locals were put under lockdown for two days, while the army hunted down Russian paratroopers and saboteurs.

Since then the city has seen something of a standoff, with a large column of Russian tanks parked several miles away, while artillery and rockets try to soften up Kyiv.

The delay in a fully-fledged ground assault has given Kyivites time to prepare.

President Zelensky has called on his countrymen and women to be equally immobile in the face of invasion, “to drive the evil from the land” as he himself refuses to leave the capital for safer territory.

Regardless of their political stripe, Ukraine’s leaders, athletes and even entertainers are holding the line.

“The question has become simple: are you for or against the enemy that is attacking us,” says Vadim Karasyov, director of the Institute of Global Strategies, an independent Ukrainian think tank.

Vladimir Putin on the other hand is beset by a lack of clarity, at home, in the ranks of his army and in his own stated policy.

Not all Ukrainians have been immobile though. Some Kyivites elected to leave the city right after Russia launched its invasion.

But instead of heading for Poland, they took their families to nearby villages in the hope of avoiding the savage shelling of civilian targets seen in cities like Kharkiv, Mariupol and small towns north of Kyiv.

But the relative security of village life has its own perils.

One man, who preferred not be identified, said you can cut the tension with a knife.

After dark the lights go out, and everyone hopes and prays that there will be electricity, gas for cooking and heating, he adds.

But the war has a way of finding people one might least expect it to be looking for.

Zelensky’s office has reported damage to, or destruction of, more than 200 schools, 34 hospitals and 1,500 homes and apartment blocks, with utility services cut off to over 900 population centres.