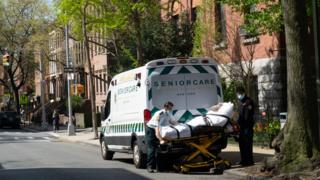 Workers at care homes in New York state must be tested for coronavirus twice a week under new rules laid out by Democratic governor Andrew Cuomo.

The mandate come as New York weighs options for relaxing other lockdown measures.

Parts of the state and neighbouring region could reopen business on 15 May.

New York has been the epicentre of the US coronavirus outbreak, with 26,670 deaths and 335,395 cases as of Sunday.

What else did Mr Cuomo say?

Despite a decline in the number of new Covid-19 infections in New York from a peak last month, deaths from the illness continue to mount.

Mr Cuomo has faced particular criticism for high numbers of deaths in the state’s care homes. The US has seen more than 25,000 coronavirus deaths in elderly homes, with more than a fifth – about 5,300 – in New York, according to a count by The Associated Press. Over 100,000 elderly people live in care facilities in New York.

The governor announced new rules for care homes on Sunday, though he bristled at the suggestion that the new guidance was an acknowledgment of a flawed plan on the part of his administration.

Besides monitoring care home staff, hospitals can no longer discharge patients back to care homes unless they have tested negative. Any of the over 600 care facilities in New York that fail to comply would lose their licenses, Mr Cuomo said.

The announcement comes as New York moves to reopen parts of the state beginning on 15 May. To qualify, a region must have at least 14 days of declines in reported infections and be able to run 30 tests for every 1,000 residents.

The governor also reported that the state is investigating 85 cases involving children suffering from an inflammatory illness suspected of being linked to Covid.

What else is happening in the US?

The White House is working to contain coronavirus cases after a valet for President Trump, and Katie Miller, press secretary to Vice-President Mike Pence and the wife of Trump aide Stephen Miller tested positive for the virus.

Dr Anthony Fauci – the public face of the US fight against the coronavirus – is among three members of the White House task force now self-isolating after possible exposure.

A senior economic adviser to Mr Trump has said that working from the White House could be risky.

“Even with all the testing in the world and the best medical team on earth, it’s a relatively cramped place,” Kevin Hassett told CNN, adding that all administration officials have to test negative before meeting with President Trump.

“We’ve all been exposing ourselves to risks, under the best guidance we could possibly have to keep us safe,” he said. “But we’re willing to take that chance because we love our country.”

The White House has sent a memo to staff urging them to work from home, according to the Washington Post.