A suspect was killed in an officer-involved shooting in Westminster on Thursday evening, police said.

Officers went to the 6900 block of Stuart Street to serve a warrant about 7:40 p.m. Police said the suspect — a 38-year-old white person, who was wanted out of Lakewood for second-degree assault, first-degree burglary and felony menacing — was armed with a handgun when SWAT officers arrived.

At some point, the suspect pointed the gun at officers, police said. Two police sergeants fired their guns, and the suspect was taken to a hospital and died. The suspect’s name has not been released. Police said it was unclear if the suspect fired the gun.

Police were still investigating the shooting later Thursday night. The Westminster officers who fired their guns were not wearing body cameras, as Westminster police does not have them. 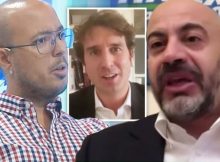