One of the beautiful things about sausages is that, as long as they contain enough fat to crisp up in all the right places, you can fill them with almost anything.

In the United States, pork predominates, though turkey, chicken, tofu and vegan versions are gaining ground, available in some form at supermarkets across the country. Less common are sausages made from lamb and beef, particularly merguez, and these are worth seeking out, at least for a once-in-a-while treat. 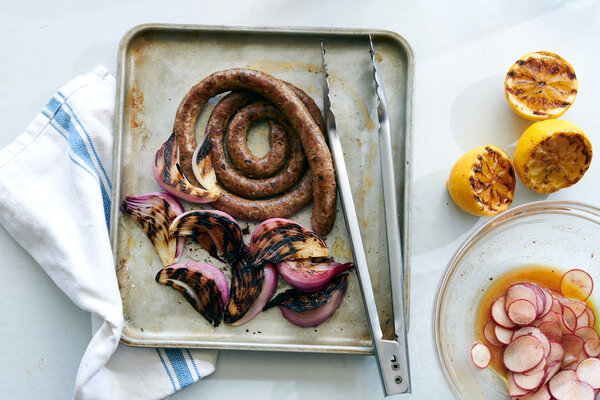 A traditional North African sausage, merguez are thin, long links spiked with garlic, cumin and fennel, and colored brick red from chile-laden harissa. According to the cookbook author Paula Wolfert in “The Food of Morocco,” the best are shot through with finely diced lamb tail fat, making them especially succulent.

I can’t say whether the ones I’ve eaten here in New York contained any lamb tail fat. Nevertheless, when grilled until nearly bursting and devoured steaming and glistening with piquant ruddy grease, they are thrillingly spicy, deeply satisfying and a cinch to make.

Like all kinds of sausages, merguez are an ultimate convenience food: preseasoned and ready to go. In North Africa, merguez are served stuffed into sandwiches, grilled and paired with flatbread to catch the drips, or simmered into tagines as part of a more elaborate meal with couscous. For this recipe, I’ve veered lighter, using the rich, brawny sausages in a summery, vegetable-packed salad.

Couscous makes up the foundation, a fluffy bed to absorb all the meaty juices. To this, I’ve added loads of fresh cucumbers, cherry tomatoes and herbs, plus radishes marinated in a little lemon juice and cumin until they have softened into floppy pickles. Lastly, for crunch, I sprinkle pine nuts or almonds over the top.

Until recently, it could be easier to make merguez than to buy them, but that’s changing fast. While you won’t see them next to the hot Italian links in every grocery store, they are becoming more available at butcher shops, large supermarkets and online. But you also can use any other kind of sausage here, preferably something with a fiery bite to contrast with the juicy sweetness of ripe tomatoes and cucumbers.

That’s yet another advantage of sausages — the ability to substitute one for the other — and still have the dish come out perfectly.