Protestors have clashed with riot police in the streets of Spain on Thursday evening. This marks the third day of unrest across the country as demonstrators demand the release of arrested rapper Pablo Hasel. Videos have begun circulating on social media displaying the chaos.

Video footage has shown massive crowds of people chanting at the police.

In a bid to keep control, riot police were caught pushing, shoving and beating protestors.

He was arrested on Tuesday evening after a standoff with police at Spanish University. 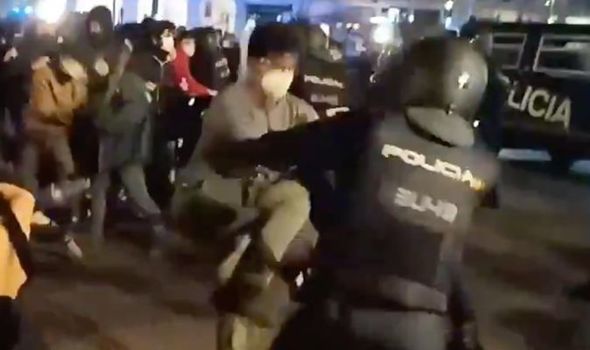 During his arrest, the rapper was heard shouting: “They will never silence us, death to the fascist state.”

The rapper faces nine months in prison for glorifying terrorism and slandering the crown and state institutions over tweets and song lyrics.

The rapper criticised former King Juan Carlos, following allegations of corruption, and insisted he was a thief and a mafia boss.

Despite protests initially starting peacefully video footage has shown many of them descend into chaos and violent scuffles with the police.

Protestors have been shown to attack riot police and hurling objects while riot police demand they disperse.

Initially, Mr Hasel was sentenced to two years before it was reduced to nine months.

However, the fact that artists could be imprisoned for song lyrics or behaviour on social media has invigorated those in the artist community to protest.

The arrest has ultimately reignited an impassioned debate in Spain regarding freedom of speech.

The biggest demonstrations this week over Mr Hasel’s arrests involved 5,000 people in the city of Girona while hundreds more gathered in Lérida (Lleida in Catalan), where the rapper was arrested on Tuesday in the day.

Another 2,000 people called for the rapper release in his home town of Segrià, according to Catalan media.