The health ministry again confirmed the huge number of deaths over the past 24 hours, with the overall total rising to 10,003 from 9,053 on Wednesday.

On Wednesday, the number of coronavirus cases in Spain soared beyond 100,000 while the number of deaths reached a new record as the country struggles to contain the deadly virus.

Spain has registered the second most deaths from coronavirus, only behind Italy, which has recorded more than 13,000 fatalities.

Last week, the country overtook China – where coronavirus originated – in terms of the number of deaths from the pandemic.

Spain has also recorded the second most COVID-19 infections, behind the USA which has more than 215,000.

There have also been more than 940,000 confirmed cases of coronavirus and nearly 50,000 deaths throughout the world, with the deadly disease spreading to some 200 countries. 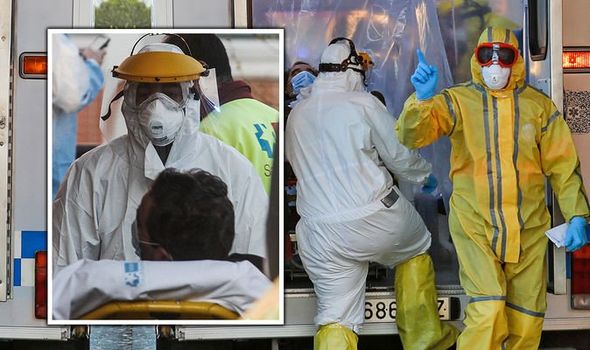 At the weekend, the Government announced all non-essential workers should stay at home for two weeks.

The unemployment rate in Spain for March surged 9.3 percent from February – the highest monthly increase ever recorded.

There are now 3.5 million people without jobs in the country – the highest number since April 2017.

Nearly 900,000 jobs have been lost in Spain since lockdown measures were enforced in mid-March.

Government data shows 898,822 Spaniards have now lost their jobs since the start of the lockdown, including some 500,000 temporary workers.

Transport Minister Jose Luis Abalos told RNE radio: “It is always a big problem and it is the double challenge we have: to fight the epidemic and to avoid the economic activity being swept away.

“We will have to work on relaunching the economy once we can get control of the epidemic.”