SEOUL (Reuters) – Authorities in South Korea pleaded with residents on Friday to stay indoors and avoid large gatherings as new coronavirus cases hovered close to 100 per day, including multiple people working on an American military base in the country. 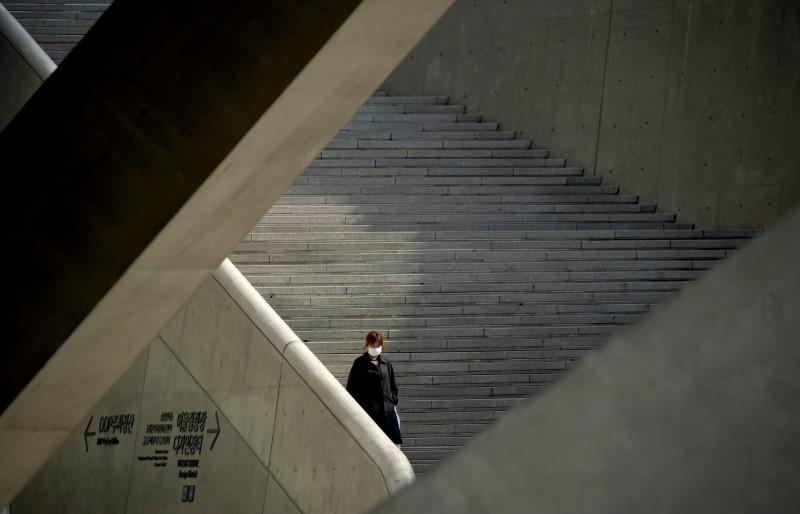 The country has reported similar daily numbers for the past two weeks, down from a high of over 900 in late February.

The government has sought to convince a restless public that several more weeks of social distancing and self-isolation may be needed to allow health authorities to tamp down the smaller but still steady stream of new cases.

“As the weather is getting nicer, I know many of you may have plans to go outside,” Yoon Tae-ho, director-general for public health policy at the health ministry, told a briefing.

“But social distancing cannot be successful when it’s only an individual, it needs to be the whole community.”

The U.S. military command this week also moved to try to restrict the movements of roughly 28,500 American troops stationed in South Korea.

On Friday United States Forces Korea (USFK) reported that an American contractor had tested positive, the third case to be confirmed this week among Americans working at the sprawling Camp Humphreys, which hosts the headquarters of the U.S. military command in South Korea.

Late on Thursday an American soldier stationed at the camp south of Seoul tested positive, as did another American contractor also working there earlier this week.

That makes 12 people – including two soldiers – related to USFK to test positive.

Officials are seeking to trace the patients’ previous movements, including the soldier, who was at work and other locations at Camp Humphreys as late as the day she tested positive.

USFK declared a public health emergency, which gives commanders more authority to ensure “total force compliance” with regulations aimed at stopping the spread of the disease by restricting the movements of not only troops, but also their families, as well as other civilians who work on the bases.

“We cannot allow the actions of a few, who knowingly and selfishly take matters into their own hands, place the rest of population at an unacceptable level of risk,” USFK said in a letter this week.

“Leaders have a responsibility to do everything in their power to protect all members of the team and make certain no one can infiltrate our protective ‘bubbles’.”

As recently as Wednesday a Facebook page affiliated with Camp Humphreys was advertising entertainment events for Thursday and Friday.

It is unclear if those gatherings were cancelled, but new statements on the camp’s social media sites said as of Friday all movement on the base was restricted to “only bare necessities, which means food and life-health-safety.”