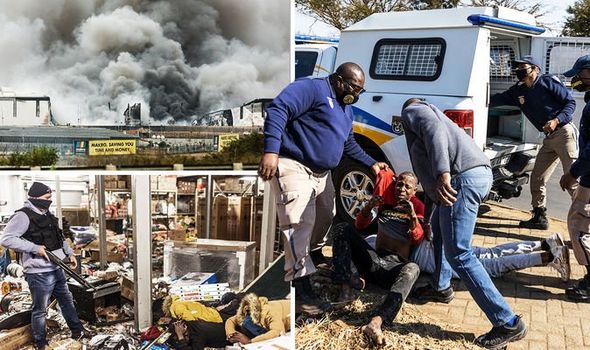 Crowds clashed with police on Tuesday night as widespread looting and vandalism engulfed South Africa once again. The unrest started last week after former President Jacob Zuma, 79, handed himself over to start a 15-month prison sentence for contempt of court.

Zuma still has support in his home province KwaZulu-Natal and some poor, rural areas where his followers believe he is the victim of a political witch-hunt.

Protests that followed Zuma’s arrest have widened into looting and general anger at the vast inequality seen in South Africa.

The poverty that remains 27 years after the apartheid is a major reason hundreds of shops have been targeted in mass lootings.

Sky News Africa Correspondent John Sparks described the situation as “completely out of control” claiming the police were “nowhere to be seen”.

“The government is going to have to set up some sort of state of emergency because this is clearly out of control.

“There is no sense of self-restraint here, there is no respect for law and order,” Mr Sparks reported from Durban.

“It is very, very difficult for them to police this – they are completely overwhelmed,” he added.

At least 72 people have died during the unrest.

Ten people were killed in a stampede while looting a shopping centre in Soweto on Monday.

A video circulating social media shows a baby being thrown to safety from a burning building during a riot.

Half of the country’s 35 million adults live below the poverty line and young people are disproportionately affected by unemployment, according to Statistics agency data.

Poverty has been exacerbated by severe social and economic restrictions as a result of the Covid-19 pandemic.

Soldiers have been sent onto the streets to try to suppress the unrest.

South Africans rallied on Wednesday to protect their property after days of looting and destruction, lending a hand to struggling security forces.

Residents in some areas have turned suspected looters into police, blocked entrances to malls and in some cases armed themselves as vigilantes to form road blocks or scare them away – indicating public disapproval of the widespread looting.

Claims for damage and theft from businesses targetted by civil unrest are estimated to be between $481 million and $683 million, the head of the only insurer covering political violence in the country said.

Sasria is a state-owned insurer set up after private firms stopped covering risks relating to political violence due to unrest during apartheid.

The company has received hundreds of millions in claims so far, its managing director Cedric Masondo said, adding this was expected to rise significantly.

“This is the worst in terms of financial magnitude,” he said.

Days of looting and vandalism has hurt thousands of businesses and severely damaged major infrastructure in the worst civil unrest in decades.

Violence has been concentrated in KwaZulu-Natal, Zuma’s homeland, as well as the country’s economic and financial centre of Johannesburg and surrounding areas in the Gauteng province.

More than 1,750 people have been arrested in connection with days of looting, arson and violence, according to a senior minister in the presidency’s office.

Despite this effort, food and fuel supplies are running short.