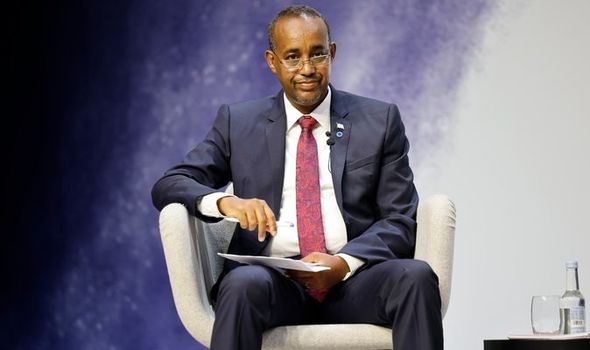 “The other members of the Council of Ministers shall continue in their duties in accordance with the laws and regulations of the country.

“All government officials are urged to refrain from misappropriating public funds and to abide by the laws and regulations of the country.”

Somalia’s Government website alleges the Prime Minister “received a tip-off” about misappropriated public land owned by the Somali National Army and “put pressure on the Minister of Defence to divert the investigation into allegations of encroachment”.

Contests to elect some 275 representatives to the nation’s Parliament in Mogadishu started on November 1.

They were expected to be completed by December 24.

However, one new member claimed that by Christmas Day just 24 out of 275 representatives had been elected to the chamber.

In a statement issued on Sunday, Mr Abdullahi Farmaajo said: “The Prime Minister is posing a serious threat to the electoral process and overstepping his mandate.”

Mr Hussein Roble responded by saying the President had spent “so much time, energy and finances in frustrating the national elections” and was “derailing the electoral process”.

The fallout even prompted a response from Washington.

The US State Department said: “The United States is deeply concerned by the continuing delays and by the procedural irregularities that have undermined the credibility of the process.”