Eleven soldiers killed, 14 others wounded following a firefight with armed group, which pledged allegiance to ISIL. 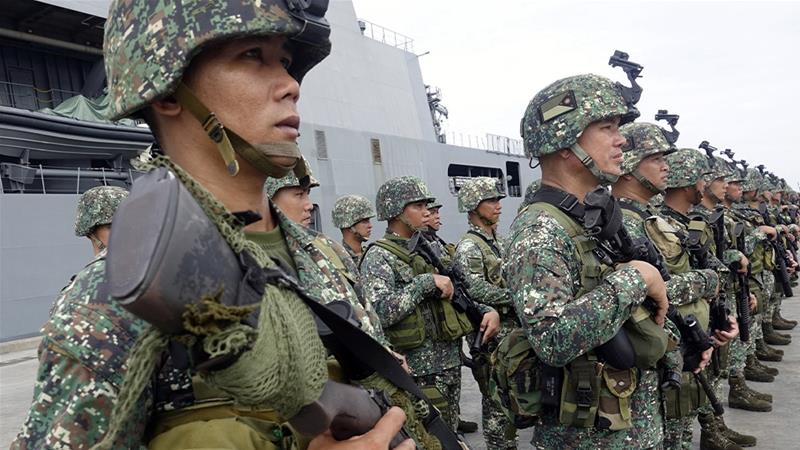 Philippine troops have clashed with dozens of Abu Sayyaf armed fighters allied with the ISIL (ISIS) group in the country’s southern island of Mindanao, leaving 11 soldiers dead and 14 others wounded, military officials said.

Regional military commander Lieutenant General Cirilito Sobejana said on Friday that the army scout rangers had been manoeuvring for an assault when they engaged about 40 Abu Sayyaf fighters in the forested mountains off Danag village in Patikul town in Sulu province.

The gun battle raged for an hour before the Abu Sayyaf fighters withdrew.

Troops fired mortar rounds towards the retreating group, and other army troops moved to block the gunmen, the military said.

A military report said the fighters were believed to be led by Abu Sayyaf commanders Radulan Sahiron and Hatib Hajan Sawadjaan, who have been blamed for kidnappings for ransom and beheadings in the southern Philippines.

Blood at the scene indicated an undetermined number of fighters were either wounded or killed, the report said.

The clash highlights the diverse problems the Philippines has in addition to the coronavirus.

The military has been staging on-and-off offensives against Abu Sayyaf, which is listed by the United States and the Philippines as a terrorist organisation, for years.

“We will sustain our security efforts in order to put an end to the menace of terrorism,” Sobejana told the Associated Press by phone.

The small but violent group is an offshoot of the decades-long separatist unrest in the south of the largely Roman Catholic nation.

The violence has eased since the largest Muslim rebel group, the Moro Islamic Liberation Front, signed a peace deal with the government that replaced a Muslim autonomous area with a more powerful and better-funded region.