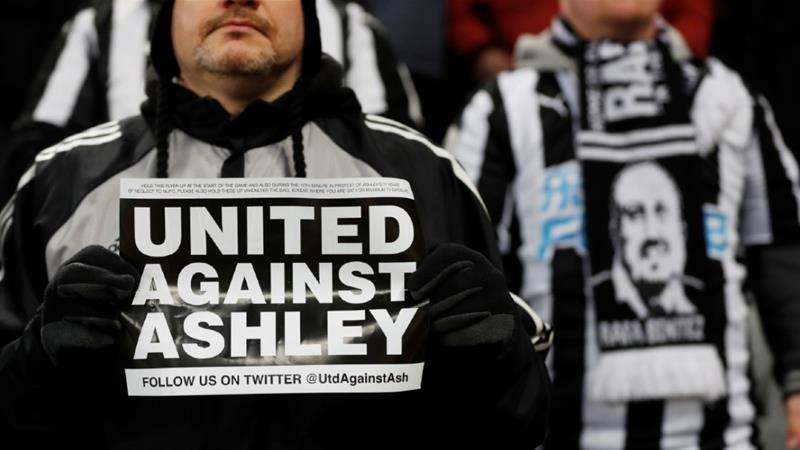 A possible takeover of Premier League football side Newcastle United by a group fronted by British financier Amanda Staveley with Saudi Arabian backing appeared to be moving closer to completion on Tuesday.

A 31-page charge agreement filed with Companies House and signed by Staveley for PCP Capital Partners and a lawyer for St James Holdings Ltd indicated a framework for a deal was being put in place.

There was no mention in it, however, of the Saudi Public Investment Fund (PIF) – Crown Prince Mohammed bin Salman’s key investment vehicle – which has previously been reported as the prospective majority shareholder. Media reports stated the group would take an 80 percent shareholding should the deal go through.

British billionaire Mike Ashley, who made his fortune from sportswear retailer Sports Direct (Frasers Group), has owned United since buying it for 134 million pounds in 2007. He first tried selling the club in 2008, sparking fury among fans, many of whom never forgave him for the sacking of club legend Kenny Keegan.

Sky Sports television said the asking price was understood to have dropped to around 300 million pounds ($378.33 million) from a previous 340 million, with Ashley willing to structure payments.

The reduction would reflect the impact of the coronavirus pandemic that has halted most football worldwide.

The northeast club has a long and proud history; founded in 1892 and spending 87 seasons competing in the nation’s top flight. It has been on the market for several years, and talks with Staveley’s PCP have been going on behind the scenes for some time.

Ashley was the first Premier League boss to take advantage of the UK’s furloughing scheme, under which the club wrote to its staff to tell them to stay at home without pay from the club, and to apply for the government’s coronavirus job retention scheme, which will see the government paying up to 80 percent of their wages. The club’s world-famous players and coaches were not affected, but the move reportedly did include Newcastle United’s foundation charity workers, who had been distributing food parcels in the early days of the crisis.

Ashley also lobbied the government to allow his Sports Direct retail stores to remain open during the nation’s lockdown, arguing that selling health and exercise equipment was an “essential service”, and his staff should be at work as normal in his shops. He later apologised for “misunderstandings”.

United remains the only Premier League club to still be intending to make use of public funds to pay non-playing staff.

There has been widespread criticism of clubs using the system, with outcry from supporters behind reversals in policy at Tottenham Hotspur, Liverpool, and, on Tuesday, Bournemouth.

Newcastle United had no comment on the takeover reports, with the Newcastle Chronicle reporting that Ashley was currently in Miami. Staveley could not be immediately contacted.

Sky reported that the Saudis would hold 80 percent of the shares, while Staveley would take 10 percent and play a key role in the running of the club. The other 10 percent would be held by billionaire brothers David and Simon Reuben.

Three years ago, PCP made an offer for a reported 250 million pounds but the talks broke down.

In 2019, Newcastle United was rumoured to be on the brink of being bought by Abu Dhabi billionaire Sheikh Khaled bin Zayed Al Nahyan, but that deal did not go ahead either.