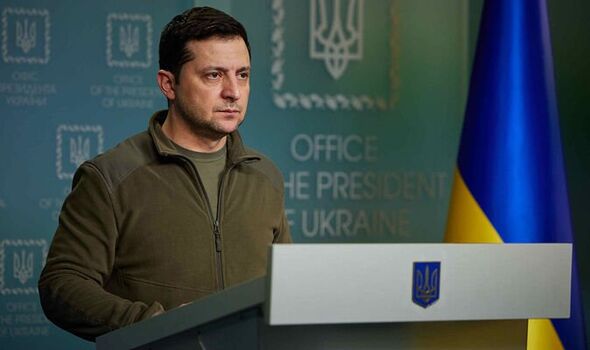 The operation follows at least three assassination attempts on the wartime hero.

Last night more than 70 SAS hardmen and 150 Seals were training for several scenarios.

The mission at a remote base on Nato territory – which the Sunday Express has agreed not to disclose – will also involve a small contingent of Ukrainian Special Forces, originally tasked to receive training in sabotage and disruption techniques before being deployed back into Ukraine.

Commanders of the Joint Special Operation Group have several options for getting Zelensky out – each fraught with risk, sources admitted last night.

The President, 44, has resisted pressure from allies to get himself to safety.

And in a rousing address to his nation yesterday, he insisted: “I am sure that soon we will be able to tell our people: come back!”

But one security source said: “Leaving him in situ doesn’t bear thinking about.”

The tightening of the Russian stranglehold around the capital makes some methods of springing Zelensky from Ukraine less viable with each passing day.

Putin’s forces have made it to Fastiv, Obukhiv and Vyshneve, west of Kyiv, meaning escape along the P04 and E95 roads will soon become too risky.

Though sources remained tight-lipped for security reasons, they acknowledged that options being considered include using a Chinook transport helicopter flanked by two Apache gunships, with transponders turned off.

While the Chinook’s rumbling engine signature is distinctive, Pentagon analysts believe it is similar enough to that of the Russian KA -52 Kamov so as not to cause undue suspicion.

A more likely scenario, however, would be to deploy an Osprey V-22 or even a captured Russian Mi-8 helicopter.

These could support any covert rescue effort in Ukraine.

Senior officials in Washington and Whitehall are clear that any mission will carry high risk.

Zelensky himself has said: “According to the information we have, the enemy has marked me as target No 1, my family as target No 2. They want to destroy Ukraine politically by destroying the head of state.”

Over the past week the President dodged three separate attempts on his life, including by private contractors belonging to Russia’s Wagner Group.

Chechen mercenaries responsible for at least one assassination bid were reportedly thwarted by dissident officers within Russia’s Federal Security Service, the FSB.

Some 6,000 Muslim Chechens are thought to have been deployed to Ukraine by Moscow – a direct message to Ukrainian citizens that continued opposition will be met by the same brutality as shown in two blood-soaked wars in which the former Soviet state tried to create a breakaway Islamic republic.

Unverified video footage related over the past week has already shown what appears to be evidence of the torture of Ukrainian prisoners by Chechen captors.

While it is likely some FSB officers, who have been in Ukraine since 2014, are aware of the fallacies behind Putin’s “denazification of Ukraine” rhetoric, others still carry deep resentment at the brutal torture and killing of young Russian conscripts.

Working independently, at least 400 private contractors attached to the Wagner Group – who also first arrived in Ukraine in 2014, as part of Russia’s “green men” army – are believed to have been in Kyiv for several weeks, engaging in sabotage campaigns and carrying a “hit-list” of more than 20 high-profile names.

But Zelensky’s global popularity is only antagonising despot Putin, according to experts.

The Ukraine President received a standing ovation after delivering an emotional speech to the European Parliament via video.

Then on Friday tens of thousands gathered in European cities to hear him say: “If we will fall, you will fall so please don’t be silent, do not turn a blind eye on this.”

Sergej Sumlenny, formerly of the German Heinrich-Boell Foundation in Kyiv, said: “For Putin, there is now no other option but to broadcast Zelensky’s dead body on TV.

“Unlike his predecessor, Poroshenko, who was an enemy from the beginning, Zelensky was a Russian-speaking actor who made his wealth in Moscow making jokes about Ukraine.

“Putin believed he was a fully controllable asset. Now he has turned into the leader of the Ukrainian national resistance, makes jokes about Putin’s army and Putin himself, and is very popular.

“For Putin, perceived traitors like this are worse than enemies. There is no option for traitors but death. Look at Litvinenko and Skripal.

“And don’t forget Zelensky is Jewish. Not only is Putin anti-Semitic but it also completely blows up Putin’s rhetoric about Ukraine needing de-Naziifcation.”

Security remains an increasing challenge for the resistant leader and he is known to move several times a day. His wife Olena, daughter Oleksandra, 17, and son Kyrylo, aged nine, are in hiding.

A source said of getting Zelensky out of Ukraine: “Every option is very high risk – we know – but we are preparing.

“The feeling is very much that we owe him morally, and that, apart from this, he could choose to continue to be an effective focal point for continued resistance.

“Frankly, the alternative – leaving him in situ – doesn’t bear thinking about.”

But yesterday Zelensky was positive his country will prevail.

In a video speech recorded on 10th day of the invasion yesterday, he said “the country does not know weekends anymore”, adding the days and nights will feel “infinitely  long” until victory.

He thanked Poland and neighbouring countries for welcoming more than a million women and children refugees without question.

Zelensky added: “In fact we no longer have a border with Poland – because we are together on the side of good.

“I am sure that soon we will be able to tell our people: come back! “Come back from Poland, Romania, Slovakia and all other countries. Come back, bbecause there is no more threat.”