‘A very meaningful event’ because LNA deprived of its most effective foreign fighting force near Tripoli, analyst says. 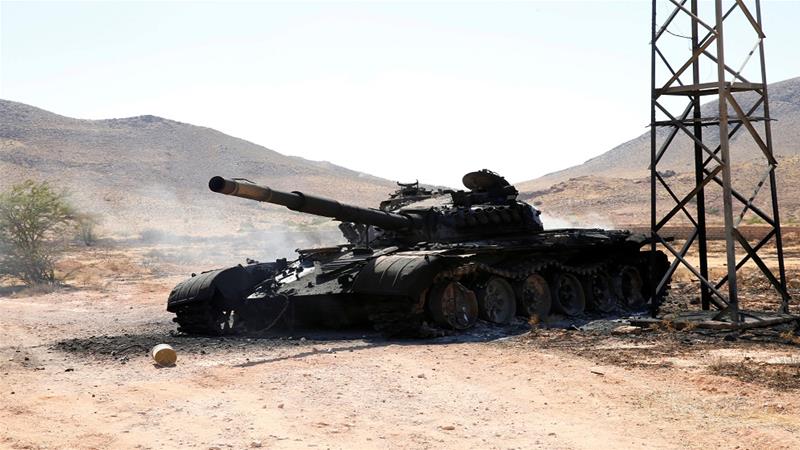 Russian fighters in Libya were flown out a town south of Tripoli by their Libyan allies after retreating from front lines at the capital, the town’s mayor said.

The reported departure of the Russians on Sunday was another blow to the Libya National Army (LNA) of eastern military commander Khalifa Haftar and his foreign allies.

The Russian fighters allied to the LNA retreated with their heavy equipment from the capital to the airport of Bani Walid, a town some 150km (93 miles) southeast of Tripoli, said Salem Alaywan, Bani Walid’s mayor.

He told Reuters news agency the Russians were flown out of western Libya to Jufra, a remote central district and LNA stronghold.

“They [the Russians] were flown in three military planes to Jufra and their military vehicles were driven there,” he said.

LNA spokesman Ahmed Mismari denied any foreigners were fighting with his force.

But the Russians’ presence has been widely documented by diplomats and journalists. Pictures purportedly showing Russians, some sitting on trucks, in Bani Walid were posted on social media.

UN monitors identified more than two dozen flights between Russia and eastern Libya from August 2018 to August 2019 by civilian aircraft “strongly linked to or owned by” Wagner Group or related companies.

Al Jazeera’s Mahmoud Abdelwahed, reporting from Tripoli, said Haftar’s immediate gains in the assault on the capital a year ago have been attributed to the fighting prowess of the military contractors from the Wagner Group.

“We don’t know why they’re leaving at this crucial time because Haftar is losing on the ground. The withdrawal of the Russian [fighters] could have major consequences for Haftar’s forces,” he said.

The Tripoli government, known as the GNA, has with Turkish help made sudden strides, seizing a string of towns from the LNA, capturing the strategically important al-Watiya airbase, and destroying several Russian-made air defence systems.

“The withdrawal [of the Russians] from the greater Tripoli area is a very meaningful event because it deprives the LNA of its most effective, best-equipped foreign fighting forces on that key front,” said Jalel Harchaoui, research fellow at the Clingendael Institute.

The GNA has deployed Syrian fighters allied to Turkey, while Haftar is also using Sudanese. The LNA still holds the town of Tarhouna south of Tripoli with the help of a local armed group.

Haftar’s forces, backed by Russia, Egypt and the United Arab Emirates, have been trying to capture the capital for 13 months, but suffered a string of defeats in recent weeks in fighting against Turkey-backed forces of the Tripoli government.

In the past two days, LNA forces have withdrawn from some positions in southern Tripoli in what they described as a humanitarian gesture. Forces allied to the internationally recognised government re-entered some of those areas.

Libya has been without central government control for nine years, and since 2014 it has been divided between two main rival governments in the east and the west. The conflict has turned into a proxy war between the foreign allies of the two sides.

What’s happening with the war in Libya? | Start Here