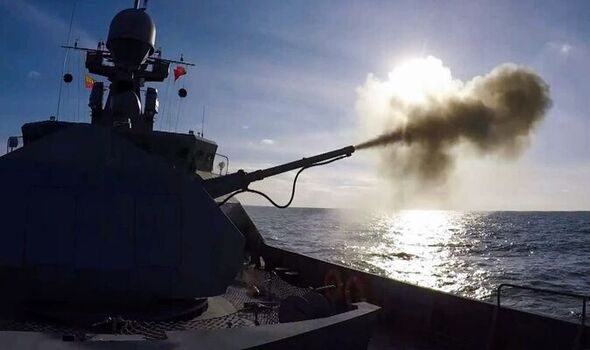 President Vladimir Putin will personally oversee the missile firing from a situation room after making himself supreme operational commander as chief of the armed forces.

The huge war gaming exercise gets underway while fierce fighting between Ukraine and pro-Russian fighters in the separatist eastern part of the country continued for a second day yesterday.

Ferocious cross-frontier artillery strikes, threatening to spark all-out war, hit the region under pro-Moscow rebel control amid fears Russia wants to provoke Ukraine as a pretext for an invasion.

The second day of violence came as Russia prepares to mobilise its nuclear forces today, unleashing ballistic and cruise missiles as part of a major “exercise”.

It will test the “readiness” of troops and commanders as well as “the reliability of weapons of strategic nuclear and non-nuclear forces” and will involve the launch of “ballistic and cruise missiles”,

Moscow’s defence ministry said yesterday. Sources described the shelling in the east over the last two days as the most intense since 2015’s combat, which ended in a ceasefire.

It sparked “false flag” allegations in which forces loyal to Russia tried to blame Ukraine in an apparent attempt to spark war.

A source said: “They are shooting – everyone and everything – there has been nothing like this since 2014-15.”

Footage showed three explosions in an area near homes under pro-Moscow control. Russian war reporter Semyon Pegov was at the scene saying: “Here is the result of shelling… peaceful houses nearby.”

Alexander Lukashenko , the leader of Russia’s ally Belarus, landed in Moscow yesterday to discuss the troop presence with Mr Putin.