Small protests erupt in cities across Brazil and the US with demonstrators denouncing coronavirus-related curbs.

Here are the latest updates:

Guatemala’s President Alejandro Giammattei says 19 more Guatemalans deported from the US to the Central American nation have tested positive for coronavirus.

The affected migrants had arrived from Alexandria, Louisiana on Monday.

Giammattei said on Friday that 12 randomly selected people from the flight had tested positive. The discovery prompted Guatemala to suspend all flights of deportees from the US.

Health authorities in China are reporting 16 new coronavirus cases in the mainland, the lowest number since March 17 and down from 27 a day earlier.

Of the new cases, nine are imported from abroad. There are no new deaths.

The latest figures bring the total number of cases in the mainland to 82,735.

The Korea Centers for Disease Control and Prevention is reporting eight new cases of the coronavirus, marking the first time infections in South Korea fall to a single digit since the outbreak peaked in February.

Of the eight, five involve travellers from overseas.

Lady Gaga, Paul McCartney, The Rolling Stones and Beyonce are taking part in a global special of music, comedy and personal stories in what Gaga calls a “love letter” to frontline workers battling the coronavirus pandemic.

The two-hour “One World: Together at Home”, broadcast across multiple television channels in the US and overseas, features a Who’s Who of pop culture, with contributions, filmed from their homes, from Elton John, Stevie Wonder, British soccer star David Beckham and former US first ladies Michelle Obama and Laura Bush.

“This is really a true love letter to all of you all over the world, and I hope a reminder of the kindness that’s occurring right now,” she adds.

Hosted by three of the biggest late night television show hosts in the United States – Jimmy Kimmel, Stephen Colbert and Jimmy Fallon – the special pays tribute to teachers and healthcare, grocery, delivery, postal and other workers.

The event, organized by the World Health Organization (WHO) and the nonprofit group Global Citizen, is the biggest celebrity effort so far to mark the coronavirus pandemic.

Europe now accounts for a total of 100,510 coronavirus deaths – nearly two-thirds of the 157,539 fatalities worldwide, according to an AFP tally.

Many countries are testing only the most serious cases and the number of confirmed infections is likely to be a fraction of the true total.

Italy and Spain remain the hardest-hit countries in Europe, with 23,227 and 20,043 fatalities respectively, followed by France with 19,323 deaths. Britain’s overall death toll is officially 15,464.

Hundreds of people in trucks, cars and motorcycles, are taking to the streets of Rio de Janeiro, Sao Paulo and the capital of Brasilia, calling for governors to resign over lockdown measures that have forced most businesses to close for weeks.

In Rio de Janeiro, about 100 vehicles are seen in the gridlock, cruising down Atlantica Avenue, along the iconic and temporarily shut-down Copacabana beach.

“Either we just have the pandemic, which is already a lot, or we have the pandemic and chaos,” says Anderson Moraes, a state legislator who had called for Rio residents to join the protest. “For sure, lives are more important than anything else, but we can’t take decisions today without thinking about tomorrow. Because tomorrow, I don’t know how a family man will be when he sees his children going hungry.”

In Brasilia, President Jair Bolsonaro who opposes the lockdowns reiterates his intention to start reopening the economy. “The fear was excessive,” he says, denouncing the “greed” of politicians “who have shut down everything and created panic.”

“People want a return to normality,” the president says in a Facebook Live session shortly before meeting with a small crowd of supporters who had gathered outside the Planalto presidential palace. 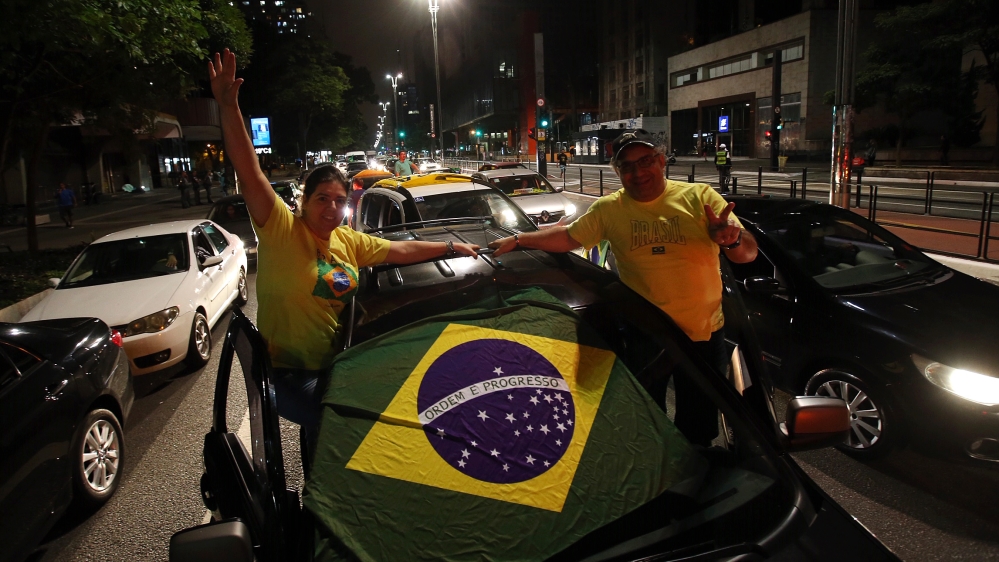 Hundreds of people are protesting the virus-related lockdowns in the US, too, with rallies in states including Texas, Maryland, New Hampshire and Ohio.

In Washington DC, Trump tells reporters that some state governors have gotten “carried away” and imposed “unreasonable” restrictions.

Read more about the protests in the US here.

You can find all the updates from yesterday, April 18, here.