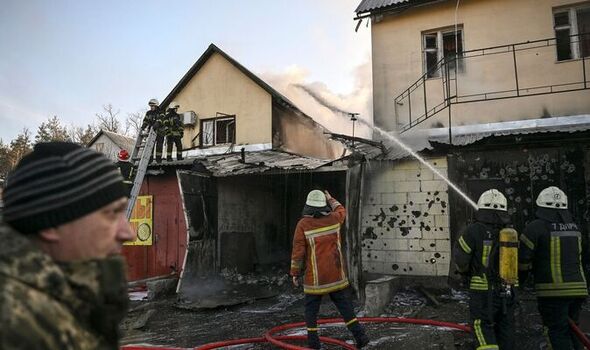 As atrocities continued on the ground – including 10 civilians killed while queueing for bread – President Volodymyr Zelensky said talks with Russia were beginning to “sound more realistic”. A deal with Vladimir Putin may be struck “within a week or two”, he added. Russia, too, said peace could be in sight – but only with significant concessions from Kyiv.

While specific details of any potential peace agreement were not given, the Kremlin hinted at what such a deal might look like.

It said one possible compromise would see a demilitarised/neutral Ukraine with its own army – along the lines of Austria or Sweden – but without any prospect of joining Nato.

Kremlin spokesman Dmitry Peskov said: “This is a variant that is currently being discussed and which could really be seen as a compromise.”

The reference to demilitarisation appeared to relate to the idea of neutral status for Ukraine.

Russian foreign minister Sergey Lavrov also mooted the idea, saying: “Neutral status is being seriously discussed along, of course, with security guarantees. Now this very thing is being discussed in negotiations – there are absolutely specific formulations which in my view are close to agreement.”

Putin himself continued to sabre-rattle, saying the war was still going to plan, addingWestern sanctions would “only strengthen Moscow”.

But as Mr Zelensky addressed the US Congress, he also earlier hinted at the possibility of a breakthrough with the Kremlin.

Having publicly conceded that Ukraine will never join Nato – a key Russian demand – he told the country’s 44 million people in a video address: “The meetings continue and, I am informed, the positions during the negotiations already sound more realistic. But time is still needed for the decisions to be in the interests of Ukraine.” He said a peace deal that would end Russia’s invasion of Ukraine may well be struck with Putin within one or two weeks – partly because Russian forces will run out of fresh troops and supplies by then.

Oleksiy Arestovich, one of Mr Zelensky’s top aides, said Ukraine was “at a fork in the road”, with either a deal in weeks, “with troop withdrawal”, or Russia asking for help from, say, Syrians “for around two and, when we grind them too, an agreement by mid- April or late April.”

Mr Arestovich called for a legally binding security agreement, signed by international partners, who would “not stand aside in the event of an attack on Ukraine, as they do today”.

Boris Johnson, meanwhile, admitted there was “no way” Ukraine will now join Nato anytime soon, insisting decisions about its future have to “be for the Ukrainian people”.

The assessment the Kremlin may need to reach a deal in weeks amid difficulties with the invasion echoed that of UK defence sources, who suggested the Russian army could be just two weeks from “culmination point”.

After this, “Ukraine’s resistance should become greater than Russia’s attacking force”, the sources added.

The UK Ministry of Defence yesterday said Russian advances have already stalled as Moscow’s manpower runs short. In analysis posted on Twitter, security officials said Russian troops were struggling to overcome challenges posed by Ukraine’s terrain, which has confined them to the country’s roads and highways.

Officials noted the destruction of bridges by Ukrainian forces had “played a key role in stalling Russia’s advance”. Amid biting temperatures, Russian troops are thought low on supplies and fuel.

But on the ground, the grim death toll of innocent civilians continued to rise.

In the latest horrific attack, Russian troops killed at least 10 civilians standing in line for bread in Chernihiv, a city in the north of the country, according to a

Ukrainian public broadcaster and the US embassy in Kyiv.

Video filmed by a correspondent at the scene of the atrocity showed bodies on the ground and an ambulance arriving.

Elsewhere, a 35-hour curfew continued in the capital, as Kyiv officials said Russian forces shelled another apartment block yesterday morning. Two people were injured after the 12-storey residential building was hit in the Shevchenko district.

But Ukrainian military officials said they had started a counteroffensive, fighting back on several fronts.

Kyiv’s air force said it had destroyed Russian war planes and shot down missiles, while its army had inflicted “devastating blows” on groups of Russian troops.

Ukrainian officials announced they had killed a fourth Russian general in a sign Moscow’s commanders are increasingly being forced to lead from the front. President Zelensky also reported the death of another Russian general but did not name him.

However, Russian troops continue to hold 500 people, including doctors and patients, “like hostages” inside a hospital in Mariupol, its deputy mayor said.

And the invaders yesterday shelled civilian areas in the neighbouring port of Zaporizhzhia for the first time. The city had just taken in 20,000 civilians fleeing Mariupol when the bombardment began. There were no reports of any casualties.