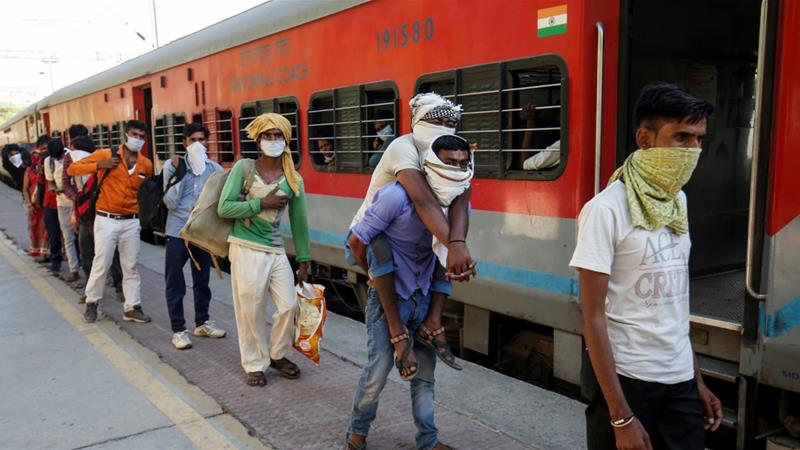 The Indian government has been criticised for charging stranded migrants, travelling by special trains to their home states, for the journey.

Millions of workers in the informal sector were rendered jobless after businesses across the country were closed following the implementation of a nationwide lockdown on March 25 in an attempt to contain the spread of the novel coronavirus.

The first batch of migrants left the southern city of Hyderabad on May 1 for the eastern state of Jharkhand after the government last week allowed special interstate trains and buses to transport those who wanted to return to their villages in other states.

Migrants were also asked to pay a surcharge of 50 rupees ($0.66) as buses run by the Karnataka government charged hefty ticket prices, according to reports in local media.

“Our workers and labourers are the ambassadors of our nation’s growth,” said Congress president Sonia Gandhi in a statement.

“When our government can recognise its responsibility by arranging free air travel for our citizens stranded abroad, when the government can spend nearly Rs 100 crores [approximately $13m] on transport and food etc for just one public programme in Gujarat, when the Rail Ministry has the largesse to donate Rs 151 crores [approximately $20m] to the PM’s Corona fund, then why can’t these essential members of our nation’s fabric be given a fraction of the same courtesy, especially free rail travel, at this hour of acute distress,” the Congress chief said.

Top businesses and celebrities have pledged millions of dollars in new donations.

Many social media users asked why the government did not use the fund to help the poor and migrant workers.

Migrant workers have been forced to walk hundreds of kilometres, many of them without food, to reach their homes.

Senior leader and member of parliament from the governing Bharatiya Janata Party (BJP) Subramanian Swamy demanded the government should pay for the fares.

“How moronic of the Government of India to charge steep rail fares from the half-starved migrant labourers! Indians stranded abroad were brought back free by Air India. If Railways refuse to budge then why not make PM CARES pay instead?” he tweeted.

Faced with mounting criticism, the office of Railway Minister Piyush Goyal said the government will pay 85 percent of the ticket prices and the remaining 15 percent will be borne by the state governments.

The government has also been criticised for using the air force to shower flower petals on front-line health workers instead of lending a helping hand to poor workers stuck in cities for at least a month now.

Gujarat is one of India’s industrial hubs, and authorities there were bracing for a logistical “nightmare” after about two million migrant workers and their families signed up for permission to return home, a state official said.

In Indore, in the central state of Madhya Pradesh, 14 migrant workers and four others were found by police on Saturday crammed into a cement mixer, local media reported. The migrants had been trying to return home from the western Maharashtra state to the northern state of Uttar Pradesh – a 1,200-kilometre (745-mile) journey.

In an exodus, many migrants already managed to return to their villages, mostly on foot. But local media reported that some died on their long journeys. Many others have been stranded at crowded shelters in various cities.