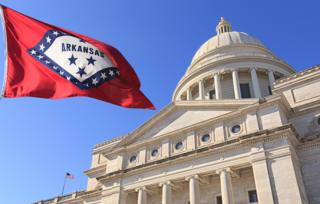 After coursing through New York and other cities, Covid-19 is now hitting small towns, in different ways. Here’s a look at how one in Ohio and another in Arkansas have fared.

William Knapp, the head of a local health board in New London, Ohio, spoke about the possibility of a coronavirus outbreak in Huron County at a meeting in February.

A few days later he came down with something. “It started with a cough,” his daughter, Sheri Gavalya, says. “That hacking, dry cough.”

Ms Gavalya, a 58-year-old nurse, is now worried about her own health. So are others in New London, a one-traffic-light town in the north-eastern part of Ohio. The governor, Mike DeWine, was one of the first in the country to issue a stay-at-home order, one he has extended to 1 May.

Most New London stores are closed, making this sleepy town even quieter than usual. The silence, says mayor Toby Thomas, is “kind of eerie”.

In Arkansas, the toll is sobering but not as bad as it is in Ohio and other states – there have been 625 cases in Arkansas, and 10 people have died.

The governor of Arkansas has decided not to issue a stay-at-home order.

In Des Arc, an Arkansas town of 1,800, an accountant named Ashley Parchman has been busy this spring. More people are filing taxes than usual so they can receive payment from an economic recovery package that was passed by Congress.

She arrives at her office at nine every morning, and stores are still open for business.

“Life has to go on,” she says. “I’m just trying to keep it as normal as possible.”

Two small towns, with dramatically different experiences of the pandemic.

More than two months into the crisis in the US, it is helpful to look at how those in small cities and towns, a category that encompasses 30 million people, are facing coronavirus. Their lives reflect the larger story of a nation in the midst of a pandemic, with its churning mix of fear, disease and politics.

The hot spots of Covid-19 are New York, Detroit and other big cities. But small towns across the nation are going through their own wave of infection. Medical experts say the disease could be devastating in rural areas – many of the residents are elderly, living far from hospitals and clinics.

The severity of the outbreak in small towns is determined by a number of factors – towns in sparsely populated states such as Arkansas, South Dakota and Wyoming have been affected only slightly, while those in Ohio, Michigan and Illinois, densely populated areas with big airports and busy interstates, are more likely to suffer.

A century ago, people in the US also saw an uneven pattern of infection.

More than 675,000 people died of the Spanish flu here between 1918-20, but the fatalities were not spread evenly across the country. “Some communities got lucky,” says University of Michigan’s Alex Navarro, who co-authored a seminal work on the 1918 epidemic. Some towns instituted social distancing or even set up barricades, but some simply had good fortune.

The reasons for the disparity today among small towns – with those in Ohio feeling the effects more acutely than those in Arkansas – is still partly because of luck. But the way that people in small towns live is determined not only by geography. Politics plays a role, too.

Conservative Republican governors in a number of states, including Alabama, Wyoming and Arkansas, have not issued stay-at-home orders, while most Democratic governors and some moderate Republicans have issued one. Governor DeWine of Ohio, a Republican, was one of the first to adopt a stay-at-home measure.

President Trump recently extended the timeline for his recommendations on social distancing and other measures to contain the virus. Medical experts say these steps will help prevent the spread of the disease.

However, Mr Trump had earlier downplayed the health crisis and said the coronavirus was like an ordinary flu.

The conservative governors of Arkansas, North Dakota and several other states underscored his message by choosing not to issue stay-at-home orders. Telling people to stay at home helps to contain the disease, but this measure wreaks havoc on the state’s economy.

The result is two realities – people in New London and other small towns in Ohio are working from home or not working at all, trying to flatten the curve. In Danville, for example, a virtual funeral was held for a farmer, James Lee Colopy, 82, who died of heart failure, so family members would not risk infection.

Yet those in another swathe of the country live in much the same way as they did before. A Des Arc businessman, William Calhoun, who works in construction, says he is travelling less and spends more time with his dogs. But sales remain strong: “It’s not really affected us.”

A study in contrasts

Trains rattle through New London, a Midwestern town of 2,400 that is surrounded by grazing fields. On a normal spring weekend, locals stop for ice cream on North Main Street and go to church. These days, though, people are hunkering down.

Ms Gavalya, the nurse, has been in isolation, looking at old photos of her late father and fighting off her own “flu, icky-like symptoms”. Her cough seems to have gone away, she says: “I think I’m one of the lucky ones.”

Not far away, the mayor, Mr Thomas, 68, and others are working from home. During breaks, he and his wife take walks, holding hands, with their terriers, Kiko and Hope, describing the outings as their “delight for the day”.

Meanwhile in Des Arc, Arkansas, a state located in the southern part of the US, Ms Parchman, the accountant goes to her office each day.

A hardware store, one owned by the mayor, James Garth, 63, who also runs the town’s funeral parlour, is open. A farmer and others in town say they are going ahead with their plans to build a gravel car park; as soon as the rain dries up, they will start clearing brush.

Des Arc was named after a bend in the White River, a waterway once filled with steamboats. Local farmers grow rice, the state’s main agricultural product, and hunt deer, squirrel and fish in the lakes.

Most of the town’s businesses, a bank, a used-car dealer and restaurants, are open, and the hum of activity provides a contrast to the empty offices in New London and other Ohio towns.

So far only one person in Des Arc has been infected with the virus, says Mayor Garth. The patient was quarantined and quickly bounced back, and the townspeople take pride in their ability to carry on.

“Even though the country’s shutting down, we’re still open for business,” says John Guess, 26, a general manager of a dealership, Car City, who works out of two locations, one in town and another in Searcy, 30 miles away. “We really haven’t slowed down.”

Many of the merchants in town have changed the ways that they run their businesses, but only slightly. The restaurants offer take-out instead of table service, and bank tellers direct customers to a drive-through.

“People are just trying to be as normal as they how know to be,” says Mr Guess, the car dealer. He adds, only half-joking: “They’re trying not to horrify the kids.”

Farmer Harvey Joe Sanner, 77, says they made it through “some pretty tough times” in the past: as a boy, he picked okra till his fingers bled.

Working in farming construction, William Calhoun, 62, recalls crop failures and drought and says he almost went bankrupt – at least once. They are working hard to ensure that they and others in town get through this bad patch, too.

He and other Arkansans can move about freely and find a workaround for the disruptions in their daily lives.

Mr Sanner usually has breakfast at TJ’s, a local restaurant, and works on a crossword puzzle, for example. On Monday, he picked up an order of sausage patties and drove to his mother’s house instead. Gladys, who is 93 and goes by Tootsie, made coffee, and they chatted in her kitchen.

That morning was hectic for Mayor Garth who has also made some adjustments to his life. He had a funeral early in the day for a death that unrelated to the virus.

Then he stopped by City Hall and headed to the hardware store. He and his employees are now showing up on alternate days, allowing for social distancing, and as a result they are all working harder when they are at the store.

“It makes us much busier,” he says.

Still those who work at the hardware store still have their jobs – unlike millions of others in other parts of the country furloughed or fired due to businesses being forced to close.

And while the Arkansas governor has not issued a formal order, many of those in Des Arc say they adopted their own measures to keep working and stay safe.

At 31, Ms Parchman is not in a high-risk category.

Still she says her views of the disease have changed: “I thought at first it was a political thing.”

These days, she feels uneasy. She still works in her office, taking calls, but otherwise avoids people, adding: “I keep my door locked.”