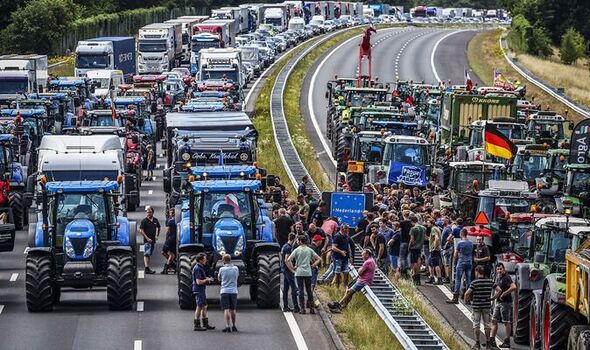 Protestors demonstrated in front of several public buildings with manure and slurry after politicians voted on proposals to slash emissions of damaging pollutants, a plan which could force farmers to cut their livestock herds or stop working altogether. Prime Minister Mark Rutte’s Government says the emissions of nitrogen oxide and ammonia, which livestock produce, must be drastically cut back close to nature areas, which are part of a network of protected habitats for endangered plants and wildlife stretching across the EU.

Dutch farmers turned out in their thousands to speak out against the World Economic Forum (WEF) climate change policies of their government.

Journalist Keean Bexte posted a video on Twitter, writing: “Farmers who learned from Canadian Freedom Protesters are currently blockading the Netherlands/Germany border with tractors to protest the WEF climate change policies of their government.”

While others dumped hay bales on roads and demonstrated at town and city halls, with some starting bonfires outside the buildings.

But the protests turned violent when a group of farmers clashed with police stationed outside the home of Christianne van der Wal, the Cabinet minister overseeing the Netherlands’ reforms to curb pollution.

Several arrests were made. 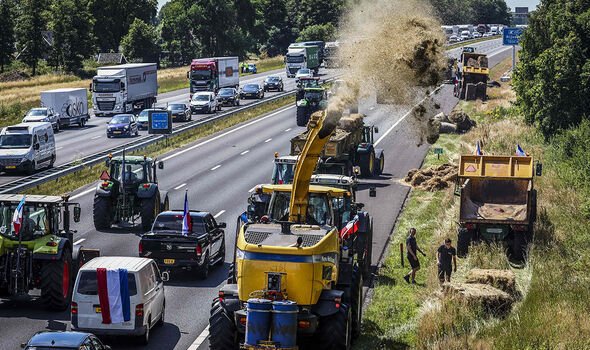 While a Twitter user warned the nation could be “paralysed” by protests.

Gohahwei tweeted: “The farmers threaten to paralyse the country if the government applies the measures it wants to introduce in the agricultural sector.

“These actions would include the blockade of several airports or the port of Rotterdam.” 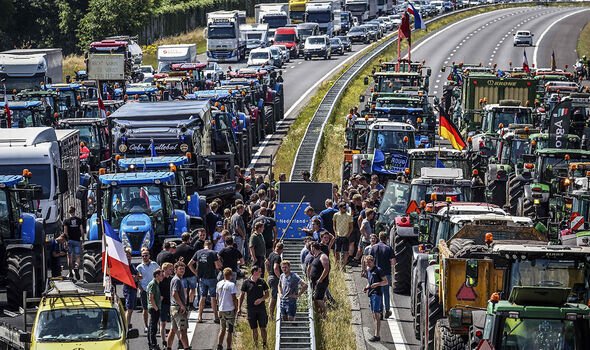 Speaking about the protests, Mr Rutte said: “Freedom of speech and the right to demonstrate are a vital part of our democratic society, and I will always defend them.

Speaking from the NATO summit in Madrid, he added: “You can demonstrate, but in a civilised way. 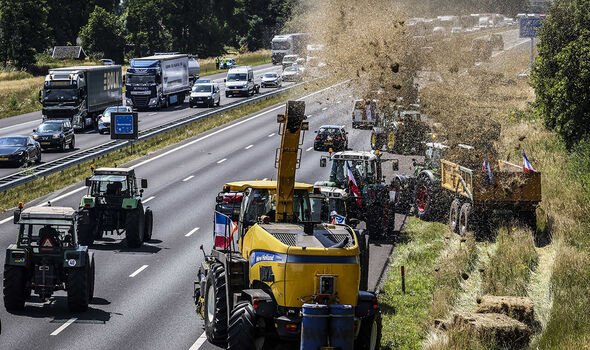 “So don’t block highways, don’t set off fireworks outside a minister’s house and spread manure and … scare two children, and endanger families.”

The Government is planning to cut emissions of pollutants, predominantly nitrogen oxide and ammonia, by 50 percent nationwide by 2030.

They say its an “unavoidable transition” to improve air, land and water quality.

Farmers have been warned they must adapt or face the prospect of closing down their business.

The Government statement admitted: “The honest message is that not all farmers can continue their business.”

But Dutch farmers say the agricultural industry in the Netherlands is being punished in comparison to other EU countries.

During a protest earlier this week, a group of farmers at a Dutch Natura 2000 region near the German border put up flags and a “Welcome to Germany” sign.