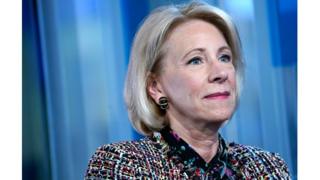 US universities must hold hearings on campus sexual assault claims where alleged victims and attackers can be cross-examined, according to federal guidelines.

The mandate is part of a new set of US Department of Education rules on how places of learning must handle sexual misconduct cases.

The agency said the rules will ensure fairness to accusers and accused.

Critics said they will discourage victims from reporting attacks.

The new policy, issued on Wednesday following an 18-month review, limits what complaints private and public universities are obliged to investigate and raises the burden for holding a school liable for sexual assault.

They have until August to comply with the rules, which are a marked shift for addressing how universities enforce Title IX, the federal law barring discrimination in education based on gender.

The previous administration had sought to expand university responsibility for sexual misconduct on campuses under Title IX.

Under the Trump administration rules, the institutions are required to provide a live hearing and allow advisers to cross-question parties and witnesses involved – a practice discouraged by the previous administration.

In announcing the policy, Betsey DeVos, the education secretary, said: “Too many students have lost access to their education because their school inadequately responded when a student filed a complaint of sexual harassment or sexual assault.

“This new regulation requires schools to act in meaningful ways to support survivors of sexual misconduct, without sacrificing important safeguards to ensure a fair and transparent process.”

Some initial rules to limit schools’ liabilities and apply the requirement for hearings to secondary school pupils Ms DeVos proposed in November 2018 were scrapped amid dissent from victims’ groups.

However, advocacy groups said the final policy cut back on victims’ rights.

Fatima Graves of the National Women’s Law Center told the New York Times that “if this rule goes into effect, survivors will be denied their civil rights and will get the message loud and clear that there is no point in reporting assault”.

The group will challenge the rules in court, Ms Graves said.