Ratification for the Nordic neighbours is now expected to be fast-tracked, with their inclusion hailed as the biggest shift in European security in decades. It is also designed to further increase Russia’s strategic isolation in the wake of its invasion of Ukraine. Swedish foreign minister Ann Linde posted: “Thank you for your support. Now the process begins.”

The Prime Minister reiterated the UK’s commitment to helping Kyiv defend and rebuild, in a call with Ukraine’s president.

Mr Zelensky thanked Mr Johnson for an extra £100million in support. The pair also discussed how to get grain out of Ukraine – with a No10 spokeswoman revealing the PM said Britain “stood ready to help in any way possible”. 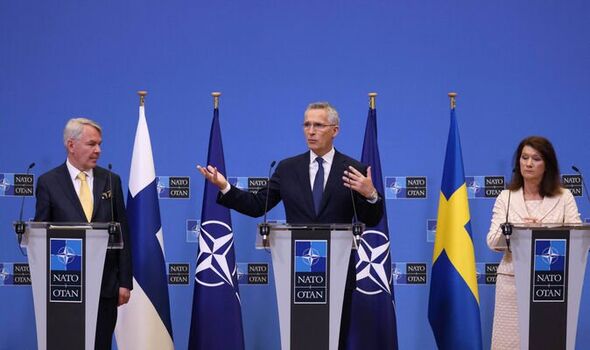 Mr Johnson has suggested using rivers to dodge Russia’s Black Sea blockade. But there was dismay as Putin – despite capturing the city of Lysychansk and so the eastern region of Luhansk – continued attacking neighbouring Donetsk.

Foreign Secretary Liz Truss told a international conference in London on freedom of belief: “Putin and his enablers claim Russia is waging a holy war, but in truth they believe nothing is sacred.

“Civilians shelter from the bom­­­­bardment while churches, synagogues and mosques are reduced to rubble.”