As infections spiral, more US states and cities are requiring people to cover their faces in most indoor settings. 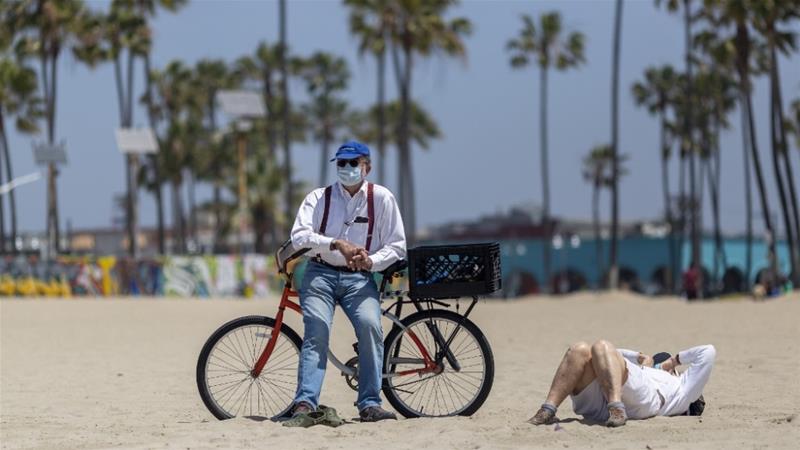 California, North Carolina and a string of cities in the United States have mandated or urged mandatory mask use to get a grip on spiralling coronavirus cases as at least six states set daily records.

Putting aside concerns about individual rights and political unpopularity, US governors and mayors said on Thursday they were turning to compulsory face coverings to stop the virus running out of control as economies reopened.

On a day when Florida posted 3,207 new cases, its second daily record in a week, Orange County Mayor Jerry Demings ordered obligatory mask use, telling residents of Orlando and other cities it would help them avoid a second shutdown.

California Governor Gavin Newsom ordered mask use in most places as the state for the second day in a row registered more than 4,000 new cases.

“Science shows that face coverings and masks work,” Newsom said in a statement about the new order. “They are critical to keeping those who are around you safe, keeping businesses open and restarting our economy.”

“This piece of protection may even save your life,” North Carolina Democratic Governor Roy Cooper told reporters, adding that he was considering statewide obligatory mask use on a day when statewide COVID-19 hospitalisations set a new high.

A month after many governors reopened their economies, a growing number are adopting US Centers for Disease Control and Prevention (CDC) guidance that masks are essential to prevent community spread.

Resistance to face masks took on a partisan edge after President Donald Trump opposed them, telling the Wall Street Journal in an interview published on Thursday that some people wear them to show opposition to him.

But with businesses ranging from Las Vegas casinos to hardware chains requiring their use, masks are becoming commonplace in the US.

In Texas, the mayors of the state’s nine biggest cities asked Republican Governor Greg Abbott this week to grant them the authority to set mask regulations.

As Oklahoma reported its second day of record coronavirus cases, the Tulsa arena hosting a Trump rally on Saturday said it would encourage all attendees to remain masked throughout the event and issue staff with personal protective gear.

Trump has pushed ahead with the rally – which would be the biggest US indoor social gathering in three months – even as health experts worry assembling thousands of people inside an arena – particularly if many are not wearing masks – could turn it into a virus “super-spreader event”.

Meanwhile, in an interview with AFP news agency, Anthony Fauci, director of the National Institute of Allergy and Infectious Diseases, expressed concern over a lack of compliance with the use of face coverings.

The US does not need more widespread lockdowns to bring its COVID-19 outbreak under control, he said, telling the news agency: “I think we’re going to be talking about trying to better control those areas of the country that seem to be having a surge of cases.”

The US leads the world in the number of confirmed infections and deaths, and on Thursday, COVID-19 cases rose by 26,357 to about 2.2 million, according to a Reuters tally. That marked the biggest daily increase in nearly two weeks.