The Met Office tweeted: “#StormAiden has been named by @MetEireann.

“Storm Aiden is forecast to bring strong winds and heavy rain to the UK on Saturday.”

Yellow weather warnings are in place across the weekend, with torrential downpours forecast.

Maps from the Met Office show the whole of the UK under torrential rainfall as Storm Aiden tracks across the country. 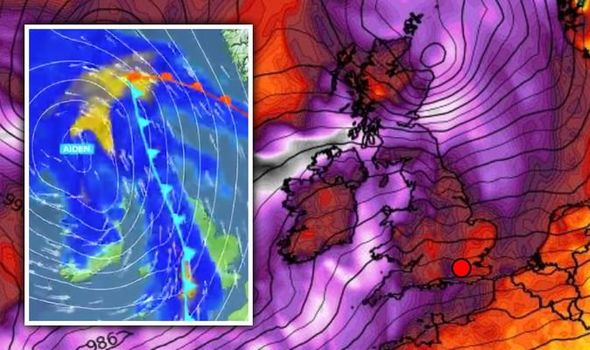 Unfortunately for those hoping to celebrate Halloween outside, Saturday will see heavy rain for much of the day with warnings lasting to November 1.

The Met Office cautions: “Further spells of heavy rain are expected during Saturday morning, clearing during the afternoon.

“An additional 20 to 30mm can be expected widely with 40 to 60mm across higher ground, possibly 80mm in the wettest places.

“Strong winds are likely, with potential for leaf fall to slow drainage and so exacerbate flooding in places.” 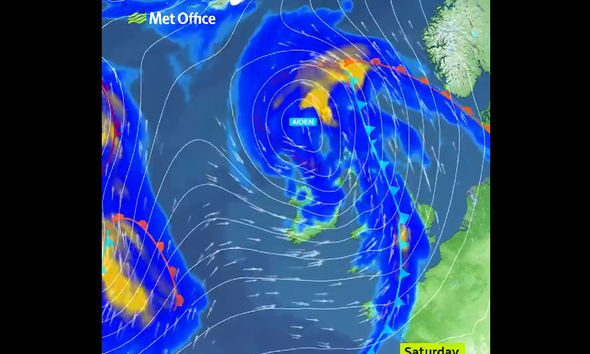 The Met Office also extended several of their warnings today, including areas not previously covered by the yellow rain warnings.

One yellow weather warning is in place from midnight tonight until 2pm on Saturday, with the warning extended into southwest England.

A second yellow weather warning is in place from 3am on Saturday until 7pm the same day.

This is for Central, Tayside and Fife, Grampian, Highlands and Eilean Siar, SW Scotland, Lothian Borders and Strathclyde.

On Sunday there is another yellow weather warning in place from 9am until 11.59pm.

The Met Office warns: “Outbreaks of rain will spread across the UK during Sunday with prolonged spells of heavy rain likely across Wales and northwest England.

“Following heavy rain in these areas during previous days, further flooding impacts and disruption to transport is likely.

“The heaviest rainfall is expected across the hills and mountains of northwest Wales and Cumbria.

“Strong winds are likely with potential for leaf fall to exacerbate flooding in places.”

This warning is for North West England, Wales, West Midlands and Yorkshire and Humber.