Met Office meteorologist, Alex Deakin, said: “Our weather remains boisterous the winds continue to be a big feature and will do into the weekend. “Unseasonably windy gusty conditions for many of us during Friday.

“The gusty winds will also blow in plenty of heavy showers. We should also see some sunny spells in between.

“Storm Ellen is drifting away but kind of being consumed by this other area of low pressure which will dominate through Friday and into the weekend.

“A lot of isobars on the chart, so it is still going to be windy and as these weather fronts move through.

“They will be bringing bands of showers just allowing those winds to really whip up all of a sudden.” 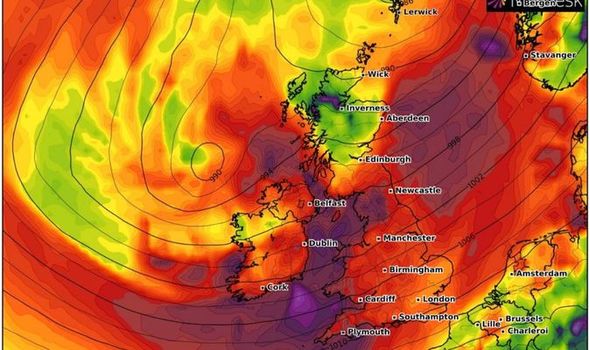 A Met Office yellow weather warning for wind applies from the north of Scotland down to the Cornish coast and is in place until the early hours of Friday.

Cautionary advice of potential travel delays and potential power cuts will extend eastwards on Friday, including central and northern England, as well as Wales. 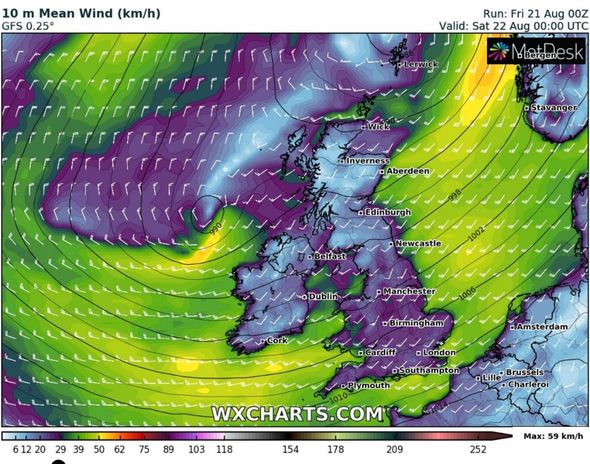 “These strong winds then move as the bands of showery rain work across these weather fronts.

“We’ll start to see the winds picking up for central and then eastern parts during the first part of Friday.”

Western Scotland, stretching down to the south-west of England will see powerful winds of up to 65mph.

Mr Deakin said: “And then, more widely on Friday, we have a yellow metal office weather warning in force inland gusts of 45 to 50 miles an hour around coast gust of 60 miles an hour and over hills. 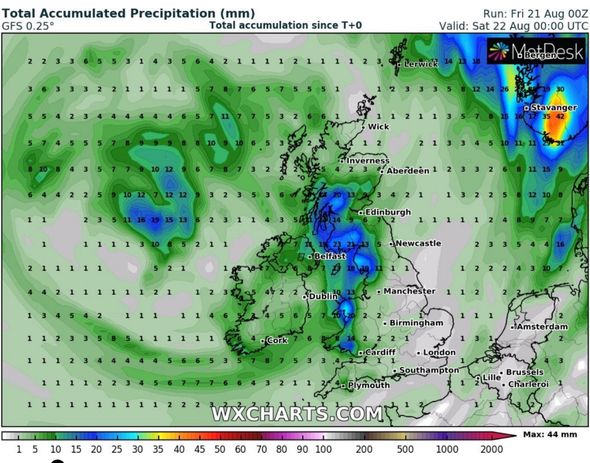 “Both weather warnings could cause some power interruption certainly some disruption to travel ferry service cancellations.

“But we’re also concerned about the strong winds combining with high tides bringing some large waves and the potential for coastal flooding.”

“So there are those weather warnings in force.”

The unseasonal weather comes just a week after scorching temperatures brought the mercury up to 34C for six consecutive days.

Mr Deakin added: “We know it’s going to be blustery but there’ll also be bands of showers coming in on Thursday night and dropping a lot of rain in a short space of time. 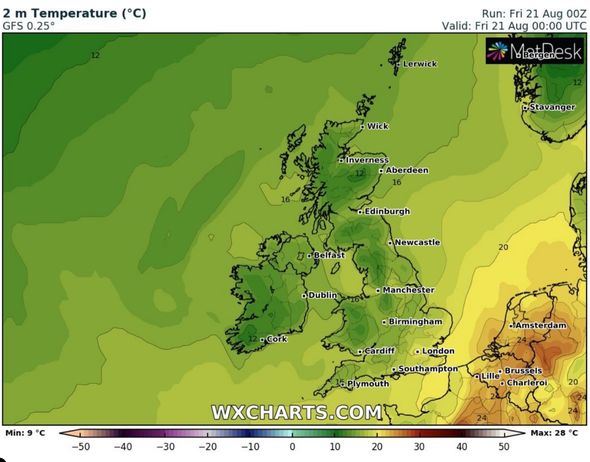 “Hail and thunder mixed in as well and those winds just suddenly changing direction whipping up.

“Not too many showers across east anglia and the southeast and so it’s windy and although we’re talking about heavy showers, look at the temperatures, a really warm night as well.

“Some towns and cities remaining in the high teens so it’s not a cold start to Friday, but it is going to be a blustery day with plenty of showers should start with some sunshine.

“Especially across eastern parts of England but quite a wet start for Northern Ireland northwest England and southern Scotland.

“Some heavy bursts of rain again here that band tracks its way northwards and then it’s more broadly sunshine and showers with gusty conditions.”