Torrential rain will batter the UK this week along with 60mph gales as wintry weather begins to sweep in towards Britain. Forecaster Netweather warned we’d see a stormy start to the month, with conditions quickly becoming colder with patchy frost and fog expected. While the Met Office warned Monday will see “occasional rain and strong winds” in the south and east, but “some heavy prolonged showers for western and northern parts.”

The forecaster issued a yellow warning for the North East England and North West England, including parts of  Durham, Northumberland, Cumbria and Lancashire, along with West and North Yorkshire.

The warning is in place from 3pm this afternoon to 11.59pm tonight, and warns “further heavy rain is expected which may lead to further flooding.”

The UK weather agency said: “Showers are expected to become heavier and more frequent through the afternoon and merge into a period of more prolonged heavy rain this evening, before clearing away northwards.

The forecaster warned to expect: 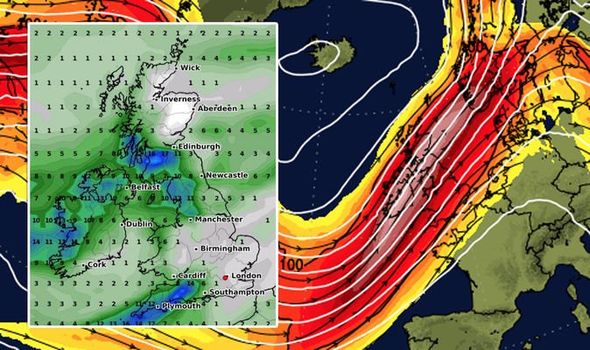 The Met Office added tonight will see clear spells and scattered showers, with “the bulk of the showers in the west and north, then in the southwest later.”

On Tuesday, much of the UK will see sunshine and showers throughout the day, with arts of southern England forecast to see “an interlude of wet, cold weather in the morning.”

Looking to the latter part of the week, the Met Office forecast reads: “Becoming largely settled with sunny spells, although with some patchy fog and overnight frost. Turning breezy and cloudy with outbreaks of rain across western Scotland on Thursday.”

BBC Weather forecaster Carol Kirkwood added the UK will have a rather chilly and blustery start to November, saying: “We have seen a lot of rain particularly so across the North of England but not exclusively.

“It’s also been a windy night, the wind will continue as we go through the course of the day, especially in the south and the west. And it is going to turn cooler through the day as well.

“To give you an idea of temperatures at the moment, it is cool in Edinburgh and Belfast and Cardiff. But look at London, Bedford and Cromer, at the moment it is 18C.

“That is ahead of this weather front which is bringing some rain. As it pushes away, cooler air will follow behind. We have another front coming in through the west, which will enhance the showers.

“And it is still going to be gusting about 40, 45 miles per hour across southern areas inland, more than that with exposure. That will continue through the day.”