The Met Office has issued yellow storm warnings throughout last week for almost all of England and Wales as thunderstorms have bettered parts of the country. Earlier this week, BBC Weather Watchers said there were a staggering 50,000 lightning strikes in a period of 24 hours across the UK following the heatwave that gripped Britain for weeks. And now, the Met Office has warned that there is a series of torrential downpours that will strike the country in the coming days. 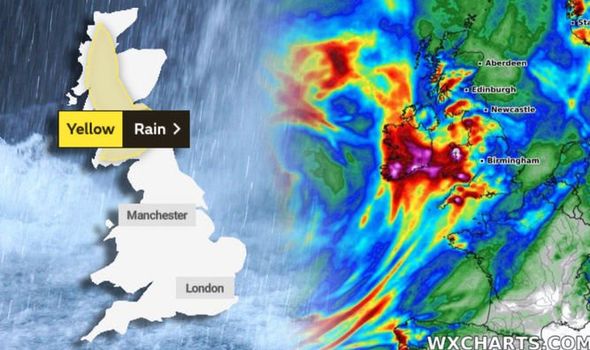 The Met Office has issued yellow storm warnings for almost all of the UK, which will extend throughout Monday, August 17, and Tuesday, August 18.

The weather forecaster predicts heavy showers on Monday and Tuesday afternoon which may bring some disruption.

According to the Met Office, there is a “small chance that homes and businesses could be flooded, causing damage to some buildings along fast flowing or deep floodwater”.

In addition, flash flooding in some areas could lead to road closures and transport disruptions, including train delays and cancellations.

There is a chance of some households and businesses losing power, and some communities are likely to be cut off by flooded roads.

Southern parts of England are expected to be the worst hit, with areas round Maidenhead and Berkshire taking a severe battering.

The Met Office warning adds: “Flooding of homes and businesses could happen quite quickly, with damage to some buildings from floodwater or perhaps lightning.”

The Met Office said a staggering 24.1mm of rain fell within one hour in Canterbury, Kent, on Saturday, which could likely lead to some surface flooding. 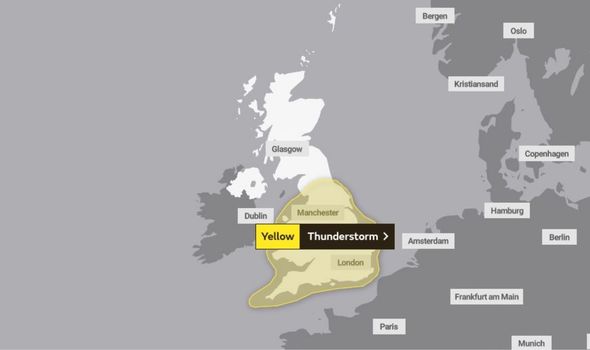 Becky Mitchell, a meteorologist from the Met Office, said the weekend had painted a “messy picture”.

Ms Mitchell said: “The main thing over the next three days is the risk of thunderstorms in the south.”

Neil Davies, Flood Duty Manager at the Environment Agency, said: “Isolated thunderstorms could bring sudden surface-water and river flooding, which may lead to flooded properties and severe travel disruption in some areas.

“Further surface water and river flooding is also a possibility.

“Environment Agency terms are working hard alongside local authorities to reduce the risk of flooding and keep communities safe. We urge people to check their flood risk.”

Chief Meteorologist at the Met Office, Frank Saunders said that ongoing thunderstorms could hit parts of England all through Monday.

He said: “Up until Monday, thunderstorm warnings cover much of England and Wales.

“The storms will not affect all areas, but where they happen there will be frequent lightning, gusty winds and intense, heavy downpours.