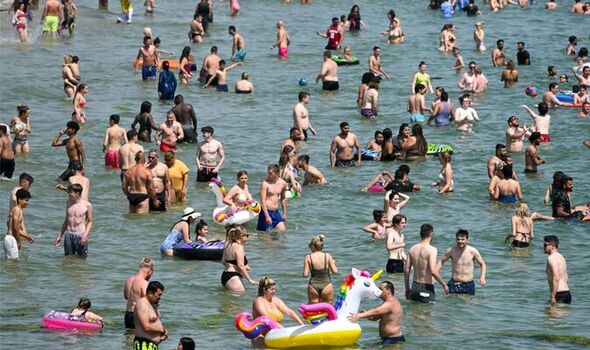 Issuing the amber weather warning for Sunday and Monday, it said the heat could lead to “potential serious illness or danger to life”.

It said “exceptionally high temperatures are possible from Sunday” and “could lead to widespread impacts on people and infrastructure”, causing major travel disruption.

The fear is this could spark a national health crisis as well causing major travel disruption plus a loss of gas, water and electricity.

The Met Office warned that “population-wide adverse health effects are likely” with “substantial changes in working practices and daily routines likely to be required”.

The Met Office added: “Government advice is that 999 services should be used in emergencies only – seek advice from 111 if you need non-emergency health advice.”

The past few days have left us wilting from a ‘Spanish surge’ – with the sizzling sunshine spreading from the Iberian Peninsula. 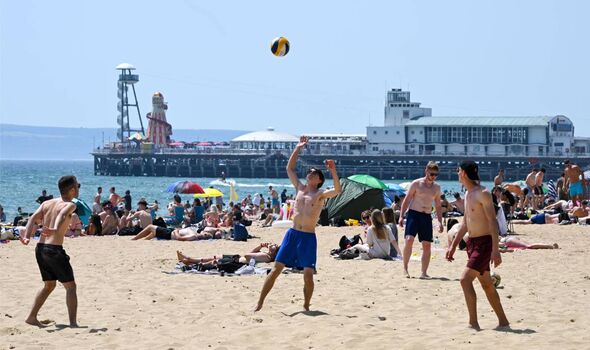 Temperatures soared to 89.6F at Northolt in west London.

Parts of the UK this week will be hotter than Hawaii, Jamaica, the Maldives and the Bahamas with 91F expected today, 84F on Wednesday, 82F on Thursday, 81F on Friday and 88F on Saturday.

Sunseekers flocked to the seaside and parks to soak up the rays – but grass across the UK, such as outside the Houses of Parliament, was looking dry and parched.

The rare amber warning kicks in this Sunday and into Monday, when we could see Britain’s hottest recorded day ever with some experts even predicting 104F.

The Met Office’s Rebekah Sherwin said 104F was only a “probability” but several weather forecasting models were predicting the UK landmark barrier may be passed next week.

“Road closures are possible, along with delays and cancellations to rail and air travel, with potential for significant welfare issues for those who experience even moderate delays.”

The warning is in place for England and Wales for the 24 hours of Sunday but this could be extended further into next week – with Monday and Tuesday projected to be sweltering.

Temperatures yesterday, while still high, were not close to what is feared will happen from Sunday – yet the heat forced speed restrictions of 20mph on some railways to avoid tracks buckling.

AA Driving School and RAC have urged drivers to carry water with them in the hot weather.

RAC Breakdown’s Rod Dennis said: “An amber warning for extreme heat over such a wide area is rare and as a result we strongly urge drivers to do everything they can to avoid a breakdown.

“This starts with checking the coolant and oil levels when the engine is cold. Oil should be topped up if it’s low, and if coolant isn’t between the ‘min’ and ‘max’ levels, top it up or take it to a garage to get it checked.”

Dr Mark McCarthy, head of the Met Office National Climate Information Centre, said of the heatwave encircling Britain: “The highest temperatures experienced in the UK tend to occur when our weather is influenced by air masses from continental Europe or North Africa.

“There is already a strongly embedded warming due to climate change across the continent, that is increasing the likelihood of challenging the existing UK temperature record.”

HR expert Rachel Suff, wellbeing adviser for the Chartered Institute of Personnel and Development, said: “Where possible, employers should be flexible with working arrangements and allow people to work from home in very hot weather if they will be more comfortable and productive.”

A Level 3 heat-health alert from the UK Health Security Agency yesterday advised people to stay inside during the middle of the day, drink extra fluids and take extra care of children.

He added: “You get an increased likelihood of blood clotting and cardiac problems because of the extra strain heat puts on the body.”