Donning black gowns, the lawyers were joined by law students and lecturers in Lilongwe, Blantyre, Zomba and Mzuzu. 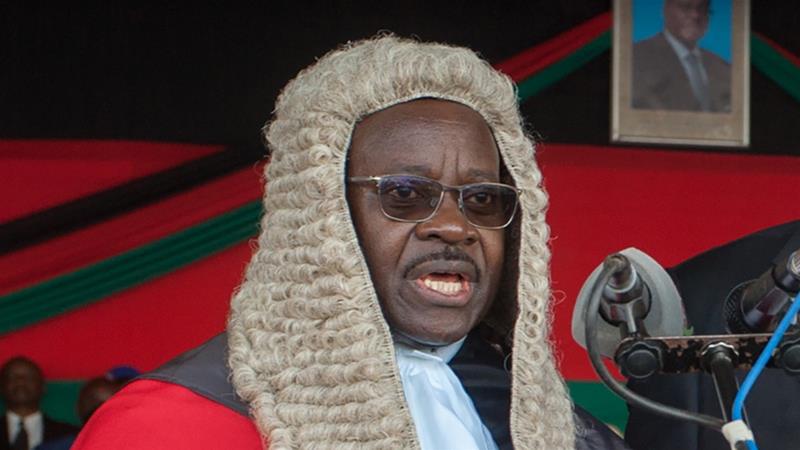 Hundreds of Malawian lawyers have taken to the streets of several cities to protest against interference with the judiciary, after President Peter Mutharika placed the country’s chief justice on leave pending retirement as the country gears up for a hotly contested election rerun ordered by the court.

Donning black gowns and dark cream wigs, the lawyers on Wednesday were joined by law students and lecturers on the streets of the capital, Lilongwe, and the cities of Blantyre, Zomba and Mzuzu.

Mutharika’s office issued a notice on Friday that sent Chief Justice Andrew Nyirenda into early retirement, 18 months before he was due to leave and two weeks before the country returns to the polls on June 23.

The move, which prompted widespread condemnation, was reportedly halted by a high court injunction following appeals by the Malawi Human Rights Defenders Coalition, the Association of Magistrates and the Malawi Law Society.

Nyirenda had led the Supreme Court decision which rejected Mutharika’s bid to overturn a landmark ruling quashing his controversial re-election in May last year.

In the judgement last month, Nyirenda said “some of the grounds for appeal were not just fictious [fictitious] but purely unprofessional, disrespectful and distasteful”.

The protesters carried banners and placards calling for the separation of powers, telling the executive “keep your hands off our judiciary”.

“Our courts should be able to deliver judgements freely and independently without interference,” said lawyer Bernadette Malunga, who led the march in Lilongwe.

The decision by Mutharika’s administration sparked widespread criticism from lawyers’ and judges’ organisations in Malawi and abroad.

Main opposition leader Lazarus Chakwera said the president’s action was “a tragic case of interference” and alleged that it could be a “way of capturing the judiciary in anticipation” of a poll loss next week.

“It’s a very poor attempt that has greatly embarrassed him. They are trying to get justice perverted in this nation,” Chakwera said.

Mark Botomani, a government spokesman, on Tuesday insisted the chief justice had accumulated 572 leave days and must proceed on leave.

Mutharika, of the governing Democratic People’s Party (DPP), was declared the winner in the May 21, 2019 elections with 38.57 percent of the popular vote, against 35.41 percent garnered by Chakwera and 20.24 percent for Saulos Chilima, the country’s former vice president.

Both Chakwera and Chilima rejected the results that returned Mutharika to power and filed a petition to the High Court asking it to nullify the results.

On February 3,  the Constitutional Court annulled the vote, citing “widespread, systematic and grave” irregularities, which included result sheets with sections blotted out or altered with correction fluid.