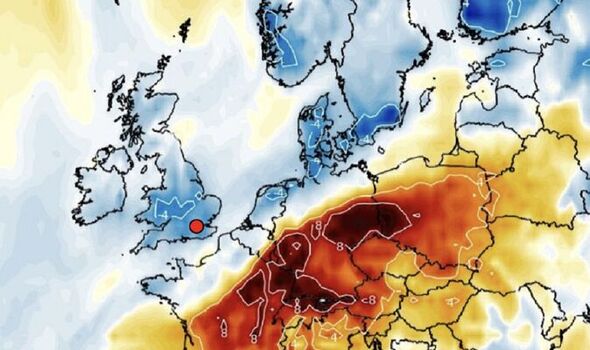 Thermometers will plummet below average in parts of the country this weekend amid warnings for torrential downpours and thunder. A cold front will sweep from the northwest through the next 48 hours although southern Britain will cling to the heat. It comes after a scorching blast from Africa pushed the mercury this week into the mid-30Cs.

Yesterday saw the hottest day of the year so far with thermometers touching a blistering 32.7C in Santon Downham, Suffolk.

Jim Dale, meteorologist for British Weather Services, said: “We are now going to get a major cooldown with temperatures dropping to half of the values we saw at the end of the week.

“We are going to swap the hot air which came up from Africa and the Continent for a returning Polar maritime airmass, and this is going to bring a big change in the weather.

“Northern Britain will see the lowest temperatures while southern Britain could remain warm through the start of the weekend.”

After days of blazing sunshine and blue skies Britons will today be plunged back into cloudy gloom.

Showers in parts could turn heavy and thundery as northern coasts brace for powerful gales.

Met Office meteorologist Alex Burkill said: “Through Saturday we are going to see a cloudy picture across parts of central and southern parts of England and Wales. “Outbreaks of rain will develop, and these could turn heavy and even thundery as we head through the afternoon.

“Across Scotland there will be plenty of showers and it will be windy unseasonably so with the risk of coastal gales.”

A cold front moving across Britain this weekend creating a massive temperature divide between the north and the south.

Torrential downpours will erupt where the front stalls, most likely across central Britain, according to the Met Office.

Low pressure to the north of the UK will trigger further showers through the rest of the week, experts warn.

Met Office meteorologist Aidan McGivern said: “A cold front is moving in from the northwest and it is likely to bring a substantial spell of rain.

“These are most likely through the central swathe of the UK during Saturday, there is such a steep temperature gradient around the front.”

Southern Britain will continue to bake in temperatures of 30C to 31C on Saturday while the north dips into the mid-teens.

Cooler and cloudier conditions will sweep the entire nation through the rest of the week, Mr McGivern added.

He said: “The far south could hold on to the heat for one more day, but it does depend on the position of that front.

“This will bring showers and a good deal of cloud and temperatures much lower than they have been.”

Despite the cooler outlook, bookies are still hedging their bets on June going down as the hottest on record.

Ladbrokes is offering 4-6 from 6-4 while Coral has cut the odds to 1-2 from evens on this month melting the books.

Ladbrokes’ Alex Apati said: “We’re on course for the hottest June since records began if the latest odds are anything to go by.”

Coral’s John Hill added: “With temperatures continuing to sizzle this month, we have slashed the odds on June ending as the hottest on record in the UK.

“We look set for more scorching weather over the next few months, which is why we are now odds-on for a record hot summer.”

Temperatures by tomorrow should widely have returned to seasonal values although thunderstorms will persist in parts.

The mercury will hit a miserable 10C in parts of Scotland and the north, while the south could reach 19C.

James Madden, forecaster for Exacta Weather, said: “From the back end of this weekend and into next week will see a return to near normal temperature values for several days and a littering of widespread thunderstorm activity.”